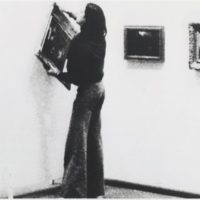 Sur les traces d’œuvres d’art volées par les nazis (On the traces of works of art stolen by the Nazis; Canada, Austria)
(20 November 2016; Journal de Montreal)
A young woman and her grandfather discover a vast and valuable collection of Nazi-looted art that was taken from her grandfather’s family in Austria.

‘I was really quite angry’: Yellowknife carvings stolen (Canada)
(21 November 2016; My YellowKnife Now)
Six carvings by John Sabourin and Derrald Taylor were stolen from an art studio in Yellowknife. The responsible party cut through a padlock to break into the building.

Stolen concrete raven returns to Ottawa artist’s studio (Canada)
(21 November 2016; CBC)
Griffin’s raven statue was mysteriously returned to his Ottawa studio overnight, with the addition of a Sharpie-drawn eye by the thief.

Facebook help in stolen art mystery may lead to more trouble (Canada)
(23 November 2016; CBC)
A group of Sudbury locals are utilizing Facebook and social media to track down a painting by A.Y. Jackson that went missing from a local school in 1974. However, a local art gallery director believes it will lead to over-heightened security measures for other works of art in the town.

Toronto police search for stolen art worth more than $50K (Canada)
(23 November 2016; CBC)
After the death of an art collector in Toronto, paintings from his house mysteriously disappeared.

Roban arte sacro a 26 iglesias cada semana en México: Diputada (Mexico)
(21 November 2016; Bajo Palabra)
Despite the federal laws in place to protect cultural heritage sites, an average of 26 churches are robbed every week according to the Catholic Media Center.

Veracruz entre los estado con mayor saquen de arte sacro (Veracruz between the states with the greatest sac of sacred art; Mexico)
(21 November 2016; Veracruzanos)
Although there are laws and reporting organisations in place to monitor and enforce the protection of cultural objects in Mexico, the lack of interagency cooperation and investigation resources hinders punishment for such thefts.

How the archaeological review behind the Dakota Access Pipeline went wrong (USA)
(21 November 2016; The Conversation)
When assessing the archaeology of the Pipeline route, Native Americans were not adequately consulted. While the Strong Heart Society Staff area remained mostly intact, others might not be so lucky.

A Step in the Right Direction for the Display of Native American Art (USA)
(22 November 2016; Hyperallergic)
The Newark Museum is exploring new ways to present Native American art, in an effort to challenge colonialist assumptions about time, space, and tradition.

Ex-Worker at Intrepid Museum Says on Video Security Should Be Shot: NYPD (USA)
(22 November 2016; DNA Info)
A former employee of the Intrepid Museum made threats against the museum’s security team in a YouTube video.

Man charged with stealing artwork from Muhammad Ali Center (USA)
(22 November 2016; USA Today)
Although a suspect has been arrested for the theft of the painting, the $5000 art piece has not yet been recovered.

Holocaust Museum Says Calls to Donate Nazi Memorabilia are ‘Skyrocketing’ (USA)
(23 November 2016; Vice)
“According to the Virginia Holocaust Museum, one of the several educational institutions dedicated to the most horrible atrocities of World War II, donation offers from owners of Nazi artifacts have quadrupled since Trump’s election.”

Ancient stolen artefact repatriated (Cyprus)
(24 November 2016; Cyprus Mail)
A London auction house turned over an ancient Cyprian object after discovering it was looted from a private collection during the 1974 Turkish invasion of Cyprus.

Trente ans après, le dénouement d’un vol rocambolesque d’albâtres précieux? (Thirty years later, the denouement of a fantastic flight of precious alabaster?; France)
(18 November 2016; Le Point)
A theft from the Basilica of Saint Michael over thirty years ago is still being fought in France as diplomatic channels are being opened to negotiate the repatriation of seven sculpture back to Bordeaux.

Germany to fund research into Nazis’ ‘degenerate art’ (Germany)
(21 November 2016; The Art Newspaper)
The Ferdinand Möller Foundation has withdrawn its funding at Berlin’s Free University to research Nazi-looted artwork. The German government has stepped in to fund the continuation of the research.

Mosaic-tiled Mexican Skull at Leiden Museum a Fake: Report (Netherlands)
(25 November 2016; NL Times)
After analysing the glue used to hold the tiles to the skull, it was discovered that the skull was more modern than the Leiden Museum of Ethnology originally thought.

Faking it: Does the forged Vermeer that fooled Goering belong in a museum? (Netherlands)
(28 November 2016; Salon)
Should we appreciate the fakes of Van Meegeren for what they are and what people thought they were?

Police recover painting stolen 19 years ago (Poland)
(24 November 2016; Radio Poland)
The painting was stolen in a break-in in Krakow in 1997 and recently recovered by police in Warsaw.

Joyas en peligro (Treasures in danger; Spain)
(21 November 2016; Heraldo)
The lack of will and compliance to conserve culturally important sites in Spain is to blame for the slow destruction of cultural heritage.

‘Ziggy’ the graffiti vandal has been targeting ancient buildings and churches in Faversham (UK)
(21 November 2016; Kent Live)
A local graffiti tagger penned Ziggy has been defacing culturally and religiously important buildings around Kent.

Batman painting stolen in £50k Belfast art raid (UK)
(24 November 2016; BBC News)
Approximately 80-100 pieces of Terry Bradley’s work has been stolen in Belfast during a raid of a gallery.

Video: £50,000 of artwork has been stolen from Terry Bradley’s Belfast gallery (UK)
(24 November 2016; Belfast Telegraph)
A gallery in Belfast, exhibiting the work of Terry Bradley, was robbed. The thieves broke in through the back and got away in a van.

A look at the book the Metropolitan Museum of Art refuses to sell (China, USA)
(22 November 2016; ECNS)
Meyer and Brysac’s book on repatriation-related issues in the American market for Chinese cultural heritage is noticeably not being sold at the Metropolitan Museum of Art, only exemplifying the reluctance of American museums outlined in the book.

Ten incidents of stolen relics strike Shanxi (China)
(23 November 2016; ECNS)
A number of murals have been stolen from temples around the Shanxi province.

Stolen frescoes highlight concern for cultural relics (China)
(25 November 2016; CRIEnglish)
At least a dozen frescoes were stolen from temples in the Shanxi province. The State Administration of Cultural Heritage is looking to step up protection of China’s cultural heritage.

Idol thief hires 5 in jail to snatch chains (India)
(23 November 2016; The Times of India)
A convicted idol thief formed a specialised team of thieves while in prison and was soon arrested once again after a series of robberies.

See Famous Artwork Missing for Over a Century at New Hokusai Museum (Japan)
(23 November 2016; ArtNet News)
Alongside the famous The Great Wave off Kanazawa, Hokusai’s recently recovered Sumidagawa Ryogan Keshiki Zukan (Landscape Scroll of Scenery at Both Banks of the Sumida River) is now on display at the new Hokusai Museum in Tokyo.

16 idols stolen from Jumla’s Chandannath temple (Nepal)
(27 November 2016; The Kathmandu Post)
“At least 16 idols, including that of the main deity Dattatreya, were stolen from the Chandannath Baba temple in Jumla”

28 idols stolen from Chandannath Temple overnight (Nepal)
(28 November 2016; My Republica)
The temple has confirmed that the theft was of 28 idols.

Piecing back together an Iraqi archaeological gem blown sky-high by Isis (Iraq)
(24 November 2016; The Guardian)
Now that Iraqis can begin returning to Nimrud after it was destroyed by the Islamic State, archaeologists and the public must decide what to do and how with the remains of the ruins.

Court: Names of Israeli Archaeologists Digging in West Bank Can Stay Secret (Israel)
(22 November 2016; Haaretz)
“It’s too bad that the court chose to lend its hand to a policy of concealment and blackouts, which deprives the public of the right to know, and of the ability to supervise and criticize.”