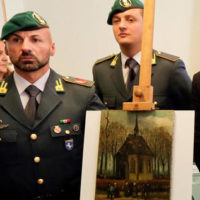 For First Time, Destruction Of Cultural Sites Leads To War Crime Conviction (Mali)
(27 September 2016; NPR)
“Ahmed al-Faqi al-Mahdi has been sentenced to nine years in prison for his role in the destruction of nine mausoleums and the door of a mosque in the Malian city of Timbuktu”

Man pleads guilty in New Brunswick Museum plaque theft case (Canada)
(28 September 2016; CBC)
“The four plaques were cut into small pieces with the dates ground off, then taken to a scrap metal yard. “

Se roban una virgen en municipio de Ocotepeque (Virgin stolen from the municipality of Ocotepeque; Honduras)
(30 September 2016; Tiempo)
The theft, from a church in the town of Santa Fe, was caught on camera

Mexico returns remains of US soldiers from 1846 war (Mexico, USA)
(29 September 2016; BBC News)
“The remains were found during building works in the northern Mexican city of Monterrey in 2011.”

Es un sacrilegio: Diócesis (Mexico)
(1 October 2016; Tabasco Hou)
The value of the crowns stolen from the Virgin of the Assumption is spiritual, not financial.

Police: Ex-girlfriend stole $10 million in art from Lantana home (USA)
(28 September 2016; Palm Beach Post)
It is unclear exactly what was stolen or how much it is worth.

Feds ‘Paying a Lot of Attention’ to International Repatriations; Is It Enough? (USA)
(28 September 2016; Indian Country Today)
Reporting on an internal conference on the repatriation of Native cultural options.

Met Picasso Belonged to Family That Fled Nazis, Suit Says (USA)
(30 September 2016; The New York Times)
According to the suit the former owner of The Actor sold the piece in 1938 Italy under duress to Paris art dealers Hugo Perls and Paul Rosenberg. The Met denies the sale was made under duress.

US-France court battle tied to Picasso comes to a head (USA, France)
(30 September 2016; Art Daily)
“A French family holding rights to photographs of Pablo Picasso’s artwork won a major victory against an American art editor in US federal court this week, in a 20-year legal battle that has outlived the plaintiff.”

Mobster said to know location of art in biggest US heist near death, attorney says (USA)
(1 October 2016; The Guardian)
The suspect in the Gardner Heist “has repeatedly denied knowing the whereabouts of any of the art taken”.

No deathbed confession in Gardner heist (USA)
(1 October 2016; The Boston Globe)
“But there’s no paintings,” said the dying man…

Vandalism of Dirty Corner sculpture at Versailles an ‘inside job’, claims Kapoor (France)
(28 September 2016; The Art Newspaper)
‘He described the response of officials at Versailles as “pathetic” and added: “I believe [the vandalism] was an inside job.”’

Judge ‘Stupefied’ by Arguments on Day One of Wildenstein Tax Fraud Trial (France)
(27 September 2016; ArtNet News)
Upon the death of dealer Daniel Wildenstein, his heirs are charged with tax fraud regarding money and painting held in trusts.

Trial Offers Rare View of Wildenstein Family and Fortune (France)
(30 September 2016; The New York Times)
Guy Wildenstein, the billionaire international art dealer, is “fending off questions about inheritance taxes and a maze of financial trusts that a French judge described as part of the family’s DNA.”

Cologne to return Menzel drawing sold in 1939 to Hildebrand Gurlitt (Germany)
(27 September 2016; The Art Newspaper)
The piece was purchased by art dealer Hildebrand Gurlitt in 1939 from a woman who fled Nazi Germany because she had a Jewish husband.

Lawful Heir of Artworks Looted by Gestapo Files Lawsuit in DC Federal Court (Germany)
(28 September 2016; The Jewish Voice)
Toren, 91, is suing Germany for the return of his uncle’s Nazi-looted work or their present value (in excess of $10 million)

Cultural Property Protection Law Comes Under Fire in Germany (Germany)
(29 September 2016; The New York Times)
An article quoting only critics of Kulturgutschutzgesetz which nearly every expert who seeks to stop the illicit trafficking of antiquities really likes.

Neue Galerie Returns Painting Seized by Nazis and Then Rebuys It in Settlement (Germany)
(27 September 2016; The New York Times)
The agreement is over “Nude” (1914) by Karl Schmidt-Rottluff

Anita Halpin among beneficiaries of Neue Galerie restitution (Germany)
(28 September 2016; The Art Newspaper)
The former chair of the Communist Party of Britain is among the artwork heirs to benefit from this Nazi-era restitution.

Van Gogh paintings stolen from Amsterdam found in Italy (Italy, Netherlands)
(29 September 2016; BBC News)
The pieces were stolen from the Van Gogh museum in Amsterdam in 2002 and though there were convictions, the art was only found now.

Ulay vs. Marina Abramović: How the epic legal battle between art-world giants went down (Netherlands)
(25 September 2016; Salon)
A review of this case by Noah Charney and Edgar Tijuis

Guardia Civil break up gang stealing valuable church antiques (Spain)
(30 September 2016; EuroWeekly)
Nearly 200 pieces were recovered, some of which were damaged in an attempt to hide their origins.

‘Moriarty of the Old Master’ pulls off the art crime of the century: Market in crisis as experts warn £200m of paintings could be fakes (UK, Liechtenstein)
(1 October 2016; The Daily Mail)
Sotheby’s has had to take back a fake Hals and the suspicious Cranach owned by the Prince of Liechtenstein is mentioned with intimations that they are by the same forger.

Dancing Shiva: National Gallery of Australia should get $11m compensation for stolen statue, court rules (Australia, India)
(27 September 2016; ABC Australia)
The money is meant to come from Kapoor but, of course, they are unlikely to see any of it.

Five stolen Tamil Nadu idols in Oz on radar for return (Australia, India)
(1 October 2016; The Times of India)
The article notes that it took 2 years to negotiate the return of the last idol from the National Gallery of Australia so these might take a while.

India takes possession of stolen 12th-century Brahma sculpture (Australia, India)
(1 October 2016; Eastern Eye)
The returned piece will go back to the World Heritage Site in Gujarat that it was taken from.

I firmly believe it will make its way back, says gallery owner whose pounamu was stolen (New Zealand)
(30 September 2016; Stuff.co.nz)
The man who stole the Maori carvings has been convicted but not all of the pieces have been recovered.

Temple looted (India)
(29 September 2016; The Hindu)
A silver idol of Marikamba was among the things stolen from from Sri Marikamba Temple in Nagara village in Hosanagar taluk, Karnataka

India recovers 12th century Brahma sculpture (India, UK)
(29 September 2016; Hindustan Times)
The piece was stolen from Gujarat in 2001 and was located in London in 2015.

Four Panchaloha idols stolen from temple (India)
(1 October 2016; Web India 123)
“The burglars also attacked the watchman who prevented them from entering the temple.”

Why the Terrorist Who Destroyed Palmyra Won’t Face Justice (Syria)
(29 September 2016; The New York Times)
“Will the court now prosecute members of the Taliban or the Islamic State for similar war crimes? The likely answer is no. “