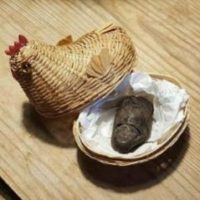 Massive Art Forgery Ring Reinforces Need For Vigilance Among Buyers
(17 October 2016; Wealth Management)
They suggest due diligence, documentation, and independent advice. Your dealer and your auction house want you to buy, hire a provenance expert.

Antiquities ministry trying to stop sale of Egyptian artefacts at New York auction (Egypt, USA)
(21 October 2016; Ahram Online)
The pieces have been deaccessioned from the Toledo Museum of Art and are being sold at Christie’s

Looters exploit the political chaos in Libya (Libya)
(20 October 2016; The Art Newspaper)
With allegations of looting to order

The ICC’s Al-Mahdi Ruling Protects Cultural Heritage, But Didn’t Go Far Enough (Mali)
(20 October 2016; The Wire)
Thinking about who the victims are in crimes that include the destruction of world heritage.

Art stolen from Steinberg heir likely to go to organized crime: expert (Canada)
(21 October 2016; Montreal Gazette)
It seems as if the thieves were selective about which artworks they stole from the Ivry-sur-le-Lac home.

Black Market for Latin American Cultural Heritage Revealed (the main auction houses of Europe and the U.S. sold more than 7; General)
(18 October 2016; TeleSur)
Between 2008 and 2016

Doña Neria, la mujer que rescató 560 piezas mayas de saqueadores (Doña Neria, the woman who rescued 560 Maya pieces from looters; Guatemala)
(16 October 2016; Soy 502)
If you are near Uaxactun in Petén, you must visit her and her museum.

Saint Jerome once owned by controversial collector Giulano Ruffini sent for technical tests (USA)
(17 October 2016; The Art Newspaper)
Sotheby’s has confirmed that they are investigating the painting that they sold in 2008 for $800k.

The Marker Where Emmett Till’s Body Was Found Has Been Riddled With Bullet Holes for Years (USA)
(18 October 2016; Slate)
The black 14-year-old’s white murderers were set free in the mid 50s by a white jury. Now signs recording what happened are being defaced and shot at.

U.S. Senators are pushing for Native American Artifact legislation (USA)
(18 October 2016; KOAT)
This push gained traction when a sacred shield belonging to the Pueblo of Acoma showed up at an auction in Paris years after it was stolen.

Picking Apart 18th-Century French Furniture to Detect Forgery (France)
(20 October 2016; The New York Times)
A cluster of forgeries has been identified on the market including copies of pieces that belonged to Marie Antoinette.

Prosecutor recommends four-year prison sentence and €250m fine for Guy Wildenstein in Paris trial (France)
(14 October 2016; The Art Newspaper)
A lot of this complicated case hinges on France not recognising trusts and what the heirs did and didn’t know about some very expensive paintings.

Trucker nabbed smuggling antiquities from Patra port (Greece, Italy)
(19 October 2016; eKathimerini)
The truck was about to embark on a ship heading to Italy.

Ritrovati tre quadri rubati a Roma nel 1983: Opere di valore inestimabile (Three paintings stolen from Rome in 1983 recovered: Priceless works; Italy)
(14 October 2016; Roma Today)
They surfaced in “the region of the Black Sea” (no specifics offered) and were recovered by the Carabinieri.

Art Dealer Claims Monet in 1MDB Scandal (Monaco, Switzerland, Malaysia)
(19 October 2016; The Wall Street Journal)
David Nahmad says that a Monet that the US Government is seeking for forfeiture is his, not financier Jho Low’s.

European Parliament bungles shipment of Nazi artifacts (Netherlands)
(19 October 2016; Politico)
The pieces from the Nuremberg trial which were on loan from US Holocaust Memorial Museum, were delivered to a private collector and not the House of European History.

Burrell’s world tour struggles to get beyond Glasgow (UK)
(17 October 2016; The Art Newspaper)
Burrell stipulated that the artworks should not leave Scotland so the government had to grant special permission for this tour. Now it looks like it is in trouble.

The art of deception (UK)
(20 October 2016; Financial Times)
Art forgers Ken Perenyi and John Myatt have gone straight and are making money having done so.

Divers steal a bronze gun from ‘at risk’ shipwreck site on Dunwich Bank (UK)
(21 October 2016; Ipswich Star)
The wreck is of an armed merchant vessel from the 1500s and is now on the Historic England at risk

Belfast police take hour to respond to art theft at Bullitt hotel – station is just metres away (UK)
(19 October 2016; Belfast Telegraph)
The piece, depicting Steve McQueen, was too big to fit in the getaway car, and it seems that the police didn’t take this very seriously.

AGNSW’s Indian sculptures feared stolen (Australia, India)
(17 October 2016; The Australian)
The NSW gallery project does not disclose what it paid for the 21 suspect items. Nor does it reveal if any research was undertaken before the purchases.

Police crack 4-yr-old temple theft case, 2 held (India)
(17 October 2016; The Times of India)
The thieves took the Goddess Nagamani’s silver ornaments and sold them to a local jeweler who was also arrested.

Why India Must Counter The Heritage Plunder (India)
(18 October 2016; Swarajya)
An interview with Anuraag Saxena, co-founder of the India Pride Project.

Sellers of ancient coins in Tamil Nadu make a killing online (India)
(20 October 2016; The Times of India)
Poor farmers collect these coins from river beds after every monsoon. They sell them to agents after taking a meagre sum from them.

Idol case: Four arrested in Ramanathapuram (India)
(18 October 2016; The Hindu)
The four allegedly stole idols for kingpin Deenadayalan and had links to Kapoor.

Arrested men smuggled many idols out of TN: Police (India)
(19 October 2016; The Times of India)
The four men have admitted to smuggling idols to foreign countries, declaring them to be handicrafts.

Four sent to judicial custody for stealing 4-century-old Buddha idols (Nepal)
(19 October 2016; The Himalayan Times)
The men are accused of stealing the idol from a temple at Naudebahal of Lalitpur Sub-Metropolitan City-12.

Find the artifact thief and win (Pakistan)
(18 October 2016; Pakistan Today)
About 40 objects were taken from the Mohenjo Daro museum in 2002. A reward for their return is being offered.

Israel’s antiquities chief compares UNESCO to Islamic State (Israel, Palestine)
(20 October 2016; The Times of Israel)
This is in response to UNESCO passing a resolution referred to the Temple Mount and Western Wall only by their Muslim names and condemned Israel as “the occupying power”.

A tale of Vermeers, art experts, and the most notorious- forger of the 20th century (Israel, Netherlands)
(21 October 2016; I24 News)
An exhibition about fakes in Tel Aviv features some famous fakes by van Meegeren.

Emirati Police Holding 3 Foreigners Trying to Sell Artifacts (UAE)
(18 October 2016; ABC United States)
They had daggers and coins and are identified as Arabs but that’s it.

Qatar Museums opens ‘Fragments’ exhibition in Katara (UAE)
(18 October 2016; GDN Online)
Mahmoud Obaidi’s response to that which has been lost and destroyed in his native Iraq, including antiquities.

Danish bog mummy’s missing toe returned after 60 years (Denmark)
(21 October 2016; The Local)
The man responsible for restoring Tollund Man took his toe home to experiment on preservation technique and it never went back to the museum. Now it’s back.

Photographer Sues Trump for Copyright Infringement Over Skittles Image (USA, UK)
(21 October 2016; Hyperallergic)
It appears as if an image Trump used to bash refugees was taken by a former child refugee and used without his permission.