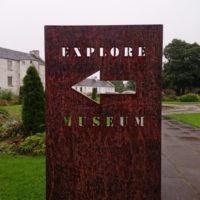 Egypt documenting Jewish artifacts (Egypt)
(5 September 2016; Al Monitor)
The registration is an “attempt to protect them from theft and neglect”.

Egypt bans statues that do not have official government approval (Egypt)
(7 September 2016; The Guardian)
“It is forbidden to set up or renovate statues, murals or sculptures in Egypt’s public squares except after a thorough review by the ministries of antiquities and culture,” said the prime minister, Sherif Ismail; this is a lot less controversial than it seems, quite normal around the world.

Egyptian statuette recovered from Mexico is authentic: Antiquities ministry (Egypt, Mexico)
(7 September 2016; Ahram Online)
The piece was found by a Mexican in a house they just bought. They turned it in and it’s presumed stolen and trafficked.

MUNA construction damaging ancient remains (Peru)
(5 September 2016; Peru This Week)
“You cannot put a museum on top of an archaeological site that has not been fully explored, building a museum in that area would mean destroying all previous civilization that was buried there”

He Denied Blacks Citizenship. Now a City Is Deciding His Statue’s Fate. (USA)
(4 September 2016; The New York Times)
To keep, contextualize, or scrap a bust of Maryland tobacco planter and Chief Justice of the Supreme Court Roger Brooke Taney.

Sen. Cornyn replaces military medals of late WWII POW stolen from his family in Fort Worth (USA)
(6 September 2016; Dallas News)
“After staff in Cornyn’s office read about the robbery in The Dallas Morning News, Cornyn reached out to the Department of Defense to arrange for the replacements.”

Thief steals $50,000 in art from Naples gallery (USA)
(7 September 2016; NBC)
The thief smashed the back door glass of the Shaw Gallery in Naples, Florida.

US Judge Approves Warrant for Acoma Shield Listed for Sale by Paris Auction House (USA, France)
(7 September 2016; Hyperallergic)
“The grant of this warrant powerfully demonstrates the commitment of the United States to protecting tribal cultural patrimony. “

Caregiver Charged With Theft Of 600+ Pieces Of Art (USA)
(8 September 2016; CBS)
The pieces were stolen from artist Dee Toscano’s home and were, in large part, her own work.

AG to decide about antiquities irregularities (Cyprus)
(8 September 2016; Cyprus Mail)
The auditor “will hand over to the attorney-general information collected by his office about irregularities at the Paphos Antiquities Department”

Letters I: Elgin Marbles dispute can be resolved by making 3D marbles of artifacts then returning them to Greece (Greece, UK)
(8 September 2016; The National)
The UK can keep the copies and send the real ones back home.

Call for action as Battle of Kinsale tourist signs stolen (Ireland)
(6 September 2016; Irish Examiner)
The signs were taken from “one of the most important battlefield sites in Irish history.”

Two British schoolboys appear in Polish court accused of stealing buttons, shards of glass and a hair clipper belonging to former Auschwitz prisoners (Poland)
(9 September 2016; The Sun)
The teens allegedly took the items while on a school trip.

Los dos acusados por robar la Custodia llegan al banquillo (Two accused of the Custodia theft face trial; Spain)
(10 September 2016; Diario Jaén)
The two could face up to 9 years in jail for the theft of the piece form the Convent of Las Bernardas

V&A director’s decision to quit hastened by Brexit vote (UK)
(5 September 2016; The Guardian)
Martin Roth is German and was leaving soon anyway, but this has hastened his decisions. Worth thinking about.

Bronze book stolen from Borders poet’s memorial (UK)
(8 September 2016; BBC News)
“A bronze book has been stolen from the top of a memorial cairn between two Borders villages”, presumably to sell for scrap.

Plea over missing 1986 Sir Antony Gormley sculpture (UK)
(8 September 2016; BBC News)
The life-sized statue was removed when a festival it was made for closed, now the UK is looking for it.

London’s National Gallery sued in NY over alleged stolen Matisse (UK, United States)
(7 September 2016; The Daily Mail)
“The National Gallery of Art in London was sued on Wednesday in New York for the return of the 1908 Henri Matisse painting “Portrait of Greta Moll” by three grandchildren of its subject, who claim it was stolen.”

Greta Moll’s Heirs Say Stolen Portrait Is at London Museum (UK, United States)
(7 September 2016; Bloomberg)
Three of Moll’s grandchildren are suing for the 1908 Matisse which was “allegedly stolen in the wake of World War II”

Aboriginal artefacts in Sotheby’s auction prompt questions over provenance (Australia, UK)
(11 September 2016; The Sydney Morning Herald)
“It’s a challenging idea. If something was sold was it under duress? Were people in a position where they could refuse a sale?,”

The Amateur Tomb Raiders Pilfering China’s Artifacts (China)
(9 September 2016; Sixth Tone)
The allegation is that the looters have been inspired to loot by online novels.

25 kilo laddu stolen from Ganesh pandal (India)
(10 September 2016; The Times of India)
The piece was seen in the hand of the deity in the morning.

500 seized coins date back to ancient times: Customs dept (India)
(7 September 2016; Tribune India)
“One consignment of 239 coins was seized from an Indian national who entered India via the Integrated Check Post, Attari”

Art collector Lance Dane’s ‘so-called’ adopted son refused relief by the Bombay High Court (India)
(10 September 2016; DNA Info)
“After Dane passed away in May 2012, Gejge approached the court challenging order of Mumbai City Collector issuedin 2013, directing Mahim police to seize the art work, antiques and other things and give it to the Hinduja Foundation.”

Suspect in Colombo National Museum theft further remanded (Sri Lanka)
(5 September 2016; Daily News)
Six others were previously arrested in this case but have been released on bail.

Suspect detained in Taipei after theft of science artifacts (Taiwan)
(9 September 2016; Taipei Times)
The pieces were taken from the Eikichi Ido Memorial House which is on a National Taiwan University farm.

Digital Troves, Providing Insights and Reuniting Antiquities (Iraq)
(8 September 2016; The New York Times)
Using old photos to track down or ‘preserve’ historically-excavated artefacts, some of which have since been stolen.

Amman hosts conference to launch regional task force to combat cultural racketeering (Jordan)
(6 September 2016; Petra)
The conference was held ” to advance cooperation between Arab countries in the fight against the illegal smuggling and sale of cultural artifacts from the region.”

Fake antiquities flood out of Syria as smugglers fail to steal masterpieces amid the chaos of war (Syria)
(6 September 2016; The Independent)
“Much of Syria’s cultural heritage has been saved from being destroyed by Isis”

Turkish government shuts down important archaeological dig, apparently to punish Austria (Turkey, Austria)
(6 September 2016; Science)
“The decision was reportedly made by Turkey’s Ministry of Foreign Affairs. No reason for the closure was given, but Austria’s chancellor, Christian Kern, had antagonized the Turkish government in August by saying the country was not fit to join the European Union.”

Police searching stolen vehicle finds 2nd century tomb in Bursa (Turkey)
(10 September 2016; Daily Sabah)
The police chanced upon a spectacular sarcophagus which appears to have been unearthed in illicit excavation. Perhaps moving the piece is why they stole the truck?

Rhinos being killed for horn’s value as collectible, study finds (General)
(10 September 2016; Portland Press Herald)
Thus strange consumption is not the only reason the horn is trafficked.

ICE-rescued ancient fossil on display at Carnegie Museum of Natural History (USA, China)
(6 September 2016; ICE)
After it’s shown in Pittsburgh, the looted and recovered fossil will be sent to the Geological Museum in Beijing.

The Disappearance and Return of the Original Ground Zero Flag (USA)
(8 September 2016; The Atlantic)
“Who took it from the pole in the five hours after the September 11 attacks? And how did it end up on the other side of the country?

Plymouth teen charged with stealing lobster statue (USA)
(9 September 2016; The Patriot News)
It comes as no surprise that the mosaic lobster was taken by a teen.