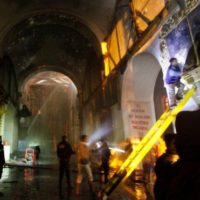 Hot this week: Fire destroys one of Peru’s most important ancient churches.

Why a growing number of museum veterans are crossing over to the commercial sector
(7 September 2016; The Art Newspaper)
Is this a conflict of interest?

Should the art market be more transparent?
(16 September 2016; Apollo)
What do we mean by art market transparency?

The man stuffed and displayed like a wild animal (Botswana, Spain)
(16 September 2016; BBC News)
A disgusting bit of shameful history, the story of “El Negro”, a human taxidermied and displayed.

Bring back vigango to their rightful locations (Kenya)
(14 September 2016; Daily Nation)
“Vigango, (singular kigango) play a central role in the lives of the Mijikenda, yet for a long time they have been treated simply as African traditional artefacts for sale, with many having been sold to foreigners, who took them abroad.”

El museo de La Plata restituirá restos de cuatro lonkos mapuches (The museum of La Plata restitutes remains of four Mapuche lonkos; Argentina)
(12 September 2016; La Izquierda Diario)
The return will happen on 11 October. Most of the skulls in the museum have no identification because they were looted.

Robbed of our antiquities (Canada)
(11 September 2016; The Chronicle Journal)
Thinking about heritage theft and destruction in a Canadian context.

B.C. allocates $2 million for First Nations repatriation efforts (Canada)
(13 September 2016; CBC)
“The Royal B.C. Museum will act as a gathering point for returning objects, although the initiative will be led and guided by First Nations partners.”

Encuentran en Bogotá dos lienzos del siglo 18 que se robaron en Boyacá (Two 18th century paintings from stolen from Boyacá found in Bogotá; Colombia)
(11 September 2016; Pulzo)
The paintings were stolen from the church of the town of La Floresta by a couple who planned the theft in advance and sold the pieces on the black market.

Alec Baldwin Files Suit Accusing Art Dealer of Fraud (USA)
(12 September 2016; The New York Times)
Baldwin is suing Mary Boone for allegedly selling him a Ross Bleckner which was not the one she said it was.

US government sues over Michigan, Maine lighthouse lenses (USA)
(12 September 2016; The Daily Mail)
“The U.S. Justice Department has sued a hunter of maritime antiques in hopes of recovering a pair of 2-foot (0.6 meter) tall glass lenses worth an estimated $600,000 that disappeared decades ago from lighthouses in Michigan and Maine.”

Moll Heirs Response to Statement from the National Gallery Regarding Suit for Return of Stolen Matisse Portrait of Greta Moll (USA, UK)
(16 September 2016; MMD Newswire)
The release says that “the Moll heirs did not take this step lightly, but only as a last resort, after discussions with the National Gallery failed.”

Will Victims of Nazi Art Thieves Finally Get Justice? (USA)
(17 September 2016; The Daily Beast)
On the HEAR act.

Russia critics, museums square off over Senate artwork bill (USA)
(15 September 2016; Politico)
The Foreign Cultural Exchange Jurisdictional Immunity Clarification Act would prevent claimants from trying to have art seized while it is on loan in the US, no matter how valid their claim.

Police probe Marrache art collection theft (Gibralter)
(13 September 2016; Gibralter Chronicle)
“The stolen paintings are part of a significant number of artworks, prints and books sold by the liquidators of collapsed law firm Marrache & Co to the Gibraltar Government for £200,000.”

Man accused of stealing priceless Chester Cathedral icon to stand trial this week (UK)
(12 September 2016; The Chester Chronicle)
“The 18th century Greek Orthodox icon depicting the Raising of Lazarus was stolen from the cathedral’s Chapel of St Anselm in August 2014”

Teesdale mayfly stone carving stolen (UK)
(16 September 2016; The Northern Echo)
The piece was part of an installation placed next to a County Durham waterfall.

Trust appealing for return of stolen tribute to Borders poet (UK)
(16 September 2016; Harwick News)
A clear metal for scrap theft, “a charity has issued an appeal to the thieves responsible for the theft of a memorial book to give it back.”

Vandals daub bizarre message on cathedral’s 900 year old walls (UK)
(13 September 2016; The Plymouth Herald)
‘Cinderella. F*ck the church’ was painted on one of the Norman towers of the Cathedral.

Ukraine hands back stolen paintings to Dutch museum (Ukraine, Netherlands)
(16 September 2016; Reuters)
The pieces stolen from the Westfries Museum in 2005 and recovered in Ukraine have been returned.

NGA hands back suspect antiquities to India (Australia, India)
(19 September 2016; The Australian)
“A 900-year-old stone Goddess Pratyangira statue and a third century rock carving of worshippers of the Buddha” were returned to India’s art minister.

Jewellery, cash looted from Hanuman temple (India)
(13 September 2016; The Times of India)
The crowns of the deities and a necklace were taken from the Indiranagar temple.

Missing idols cause concern in Telangana, AP (India)
(14 September 2016; The Hans India)
“According to experts, there are close to 100 precious idols that date back to over 300-400 years that come under “untraceable category”

City cops nab gang involved in 13 temple thefts in Karnataka (India)
(16 September 2016; The Times of India)
The gang was nabbed trying to rob a jewellery shop and, upon interrogation, it was found they had looted 13 temples.

Rani Pokhari reconstruction to resume this week (Nepal)
(12 September 2016; The Kathmandu Post)
Work will resume following an agreement between the Department of Archaeology (DoA) and Kathmandu Metropolitan City (KMC) about the proper way to restore the structure.

23 cultural assets damaged after quake in ancient capital (South Korea)
(13 September 2016; Yonhap News Agency)
The authorities “examined the national treasures and other monuments in Gyeongju, the epicenter of the quake, as well as in nearby regions”/

Donald Trump Used His Foundation’s Money to Buy a Painting of Himself (USA)
(12 September 2016; Hyperallergic)
But where is it? Get in touch with the authors if you know.