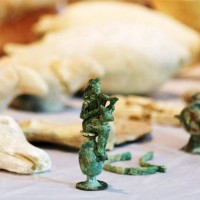 Hot this week: Various views on fakes from around the world.

On the Fine Line in Art Between Inspiration and Appropriation
(9 August 2016; Signature)
A review of two new books that cover this thorny issue.

Benin set to recover its cultural heritage from France (Benin, France)
(9 August 2016; Africa News)
“For the first time, authorities in Benin have made a formal request to its former colonial master, France, to officially return its cultural property.”

Blood & Gold: Children Dying As Egypt’s Treasures Are Looted (Egypt)
(8 August 2016; Live Science)
Disturbing report that says children are being forced to loot archaeological sites in Egypt, with several having died in the process.

Why Does Van Gogh’s ‘Poppy Flowers’ Keep Getting Stolen? (Egypt)
(14 August 2016; The Daily Beast)
“One museum in Egypt has faced the indignity of having the same Van Gogh painting stolen not once, but twice, and `Poppy Flowers’ (1887) remains missing to this day. “

Libya’s Antiquities Department refutes UNESCO report on Lepits Magna (Libya)
(7 August 2016; The Libya Observer)
The head of the Leptis Magna Control Committee says that UNESCO’s move to place it on the In Danger list is unwarranted.

Artist Accused of Disowning a Painting Testifies (USA)
(8 August 2016; The New York Times)
The controversial suit against Peter Doig challenges an artist’s right to authenticate their own work.

Forever 21 Under Fire Once Again For Allegedly Copying Indie Designs (USA)
(8 August 2016; Refinery 29)
The retailer is currently selling a graphic sweatshirt that bears a strong resemblance to those of Emily Oberg’s Sporty & Rich

Indian Camp Ranch — America’s First Archeological Subdivision (USA)
(8 August 2016; San Juan Independent)
“Each of its 31 plots has been platted to include Ancestral Puebloan (aka Anasazi) ruins”, a controversial model.

Still No Leads Finding Stolen Roger Maris Memorabilia (USA)
(9 August 2016; AM770)
The items were stolen from the Roger Maris museum in Fargo and the police have, so far, only hit dead ends.

I Want My Art Back More Than My Van, Theft Victim Says (USA)
(9 August 2016; DNA Info)
A sculpture entitled Rope Trick was inside a car that was stolen.

Video: Cackling Williamsburg Hipsters Run Off With Church’s Sacred Jesus Statue (USA)
(10 August 2016; Williamsburg Patch)
The Sacred Heart statue was stolen in early May and the police have released video of the suspects.

Brea’s 8-foot-tall public sculpture ‘Selections’ stolen, likely for its copper (USA)
(10 August 2016; The Orange County Register)
The police are focusing their investigation on scrapyards and recyclers who may have unknowingly been sold the sculpture by the thieves.

Father Columba Stewart on saving ancient religious texts from theft, wear and extremism (USA, Syria, Israel)
(11 August 2016; The National)
“The Hill Museum & Manuscript Library (HMML), a non-profit organisation based in Collegeville, Minnesota, and dedicated to the digital preservation of endangered manuscripts around the world.”

Two Detroit Artists Face Up to Four Years in Prison for Political Graffiti (USA)
(12 August 2016; Hyperallergic)
They’re “Facing up to $75,000 in fines and four years in prison for allegedly painting “Free the Water” in large block letters up the side of a water tower in Highland Park.”

Lost and found: “What Was Ours” (USA)
(12 August 2016; Santa Fe New Mexican)
A new film about when the community around the Northern Arapaho and Eastern Shoshone tribal museum discovered their artefacts were actually owned by outsiders such as the Field Museum in Chicago.

eBay embroiled in row after relic of Catholic saint found for sale (USA)
(12 August 2016; Christian Today)
“A Catholic has started a petition against eBay after discovering a first class relic of the bone of a saint for sale on the auction website.”

Exploring the gray area between cultural appreciation and appropriation in Juneau (USA)
(13 August 2016; Juneau Empire)
Native tattoos on non natives? Is that ok? Carvings? Art inspiration? This article explores where lines are and aren’t drawn.

Pueblo leaders: Patrimony legislation won’t hurt art dealers (USA)
(13 August 2016; Santa Fe New Mexican)
“Federal legislation to curb the sale abroad of American Indian tribal patrimony doesn’t mean that art dealers will be forced to turn over their inventories or that contemporary Native artists will not be able to sell their work.”

Ministry to ask police to investigate allegations of missing antiquities made by Paphos mayor (Cyprus)
(8 August 2016; Cyprus Mail)
“The transport ministry on Monday said it was preparing a letter asking the police chief to investigate the allegations of Paphos Mayor Phedonas Phedonos that some of the antiquities department staff were stealing and selling artefacts from the basements of museums.”

Spat over Paphos antiquities continues (Cyprus)
(9 August 2016; Cyprus Mail)
“Of the around 20,000 ancient artefacts stored in the Paphos museum basement, only 5,000 have been digitised in the last seven years, the town’s mayor Phedonas Phedonos said on Tuesday.”

Pioneering war photographer Gerda Taro’s images vandalised in Leipzig (Germany)
(12 August 2016; The Art Newspaper)
“The works, which depict scenes of conflict including the Spanish Civil War, were covered in black paint on the night of Wednesday, 3 August.”

Prized painting stolen from Adolf Hitler comes to light 71 years later (Germany, USA)
(12 August 2016; Mirror)
“One of the dictator’s favourite artworks was taken as “war booty” by an allied solider after the last Nazis had fled the retreat in May 1945”, now it’s for sale.

Family of three charged over possession of illegal antiquities, drugs (Greece)
(9 August 2016; eKathimerini)
Over 350 antiquities as well as cannabis and cannabis plants were seized.

The replica factor (Italy, UK)
(11 August 2016; Architecture Now)
A World of Fragile Parts is an exhibition co-produced by the V&A and the Venice International Architecture Biennale.

Uma discussão de há décadas (A discussion for decades; Portugal, Angola)
(10 August 2016; Publico)
With other countries returning artefacts to Africa, is it the Portuguese Museum of Ethnology’s turn?

Man jailed after admitting church lead theft (UK)
(4 August 2016; Suffolk Constabulary)
The man admitted that he stole lead from the roof of St Mary’s to sell for scrap.

Top level bid to save ancient Wemyss caves (UK)
(8 August 2016; The Courier)
The plan will be presented to the Scottish Government after vandalism incidents.

David Zwirner Sued for $2 Million Over Mystery Artwork by ‘World-Renowned Artist’ (UK)
(10 August 2016; ArtNet News)
“An unnamed artwork by a mysterious artist is at the center of a $2 million lawsuit against dealer David Zwirner by Old Master dealer Fabrizio Moretti via his the London company, Blue Art Limited”

Life-size model of goat stolen from Sheffield allotment (UK)
(11 August 2016; The Star)
Alas, the loss of Billy, an art installation. A meaningful goat to the owner.

Artist Claims Topshop Ripped off His Designs (UK)
(12 August 2016; Hyperallergic)
“Azerbaijani artist Faig Ahmed has accused Topshop of plagiarism after discovering a T-shirt on the company’s website printed with an image that resembles his signature artworks.”

Daughter reveals motivation for Eddie Burrup art scandal (Australia)
(6 August 2016; The Weekend Australian)
Artist Elizabeth Durack was not an Aboriginal man named Eddie Burrup and her daughter feels that she wasn’t ‘channelling’ him either. She saw it as an ‘experiment’ but not a hoax.

How China Must Reclaim Its Lost Cultural Heritage (China)
(8 August 2016; Frontera News)
“My humble proposal: the Chinese government could start and manage a national heritage fund to purchase for the nation items of cultural and artistic importance. “

China’s Historical Relics to Be Preserved; Local Government Punishes Tomb Raiders Backed by Private Art Collectors (China)
(10 August 2016; Yibada)
“It is difficult for the government to control such a large place, and some tomb thieves have more advanced technology than the government.”

The Potential Dark Side of China’s Art and Antiquities Boom (China)
(12 August 2016; The Diplomat)
An evaluation of some of the problematic aspects of the Chinese antiquities market.

All you need to know about the idol smuggling racket worth crores (India)
(8 August 2016; Hindustan Times)
The story behind Deenadayalan’s downfall

Dancing Shiva: Indian villagers still waiting for the return of their stolen statue (India)
(8 August 2016; ABC)
Sripuranthan’s temple has been cleaned up, and the Nataraja has been returned from Australia, but it isn’t back in the village. It’s being held as evidence against Subhash Kapoor.

Kerala temple theft: Panel to move SC for probe (India)
(8 August 2016; The Hindu)
“The Supreme Court-appointed committee said the officials had not informed it about the theft”

Duo nabbed for temple thefts (India)
(9 August 2016; The Hindu)
Kazhakuttom police have arrested two individuals, one who allegedly stole from 200 temples over the course of three decades.

Robbery at Neemuch Mata Temple; Cash and Crown stolen (India)
(10 August 2016; Udaipur Times)
The crown of the goddess was taken from Neemuch Mata temple during an armed robbery.

Eight temples burgled in one night in Mandya district (India)
(11 August 2016; The Hindu)
“Burglars had targeted six temples in different parts of the district and had decamped with cash, silverware and other materials”

Four-faced Shiva idol found at Bhaktapur (Nepal)
(7 August 2016; The Kathmandu Post)
The piece was found buried under a tree in the northern part of the temple grounds and it is assumed to have come from looting of a temple destroyed in the quake.

One arrested with stolen artifacts, antique idols (Nepal)
(9 August 2016; My Republica)
“Nepal Police has arrested a member of a gang of six to seven youths allegedly involved in stealing artifacts and antique idols from quake devastated buildings, temples and other structures.”

The foot of Zeus (Afghanistan, Japan)
(3 August 2016; Prospect Magazine)
“The foot of Zeus and the other antiquities collected by the Japan Committee for the Protection of Displaced Cultural Properties have been returned to Afghanistan, arriving back in Kabul this week. After more than twenty years, it is back where it belongs.”

MKs turn to UNESCO to save prophet’s tomb (Iraq, Israel)
(8 August 2016; Ynet News)
The MKs are alleging mismanagement and threat of destruction at the site.

Ancient breakwater in Istanbul broken (Turkey)
(11 August 2016; Hurriyet Daily News)
“The breakwater of the ancient Theodosius Harbor has been broken into pieces by construction equipment, against a decision by the Istanbul Protection Council for its removal with scientific methods under the inspection of experts.”

The 10 Most Hated Public Sculptures (General)
(11 August 2016; ArtNet News)
Some public art could be considered a pubic crime…

Falta mayor consciencia para reportar fósiles (Greater awareness about reporting fossils is lacking; Mexico)
(7 August 2016; Milenio)
Looting and sale of fossils is illegal in Mexico but there isn’t a public understanding of the need to report fossil finds.

Dig for lost Nazi ‘gold train’ gets underway in Poland (Poland)
(12 August 2016; DW)
A team of 35 people are currently wasting their time looking for a mythical train that is meant to be buried somewhere.

Harry Potter exhibition sign ‘magically’ disappears from Devon attraction (UK)
(10 August 2016; The Herald)
“Organisers told The Herald they’re unsure if it has been taken by obsessive souvenir hunters or a passing Death Eater.”

‘A national treasure’: The tangled trail of a priceless moon rock memento from Apollo 11 (USA)
(11 August 2016; The Washington Post)
The bag was stolen, recovered, accidentally sold at government auction, now the government wants it back.