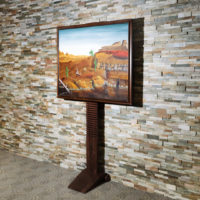 Hot this week: Authenticity for the court (not the artist) to decide.

Appropriation In Art — Part of a Belief System
(15 August 2016; Artlyst)
“The cult of appropriation calls attention to the fact that the contemporary art world is amongst other things a belief system”

A Culture Returned
(18 August 2016; UTNE)
An excerpted from Stolen Words: The Nazi Plunder of Jewish Books by Mark Glickman.

Sisi meets with antiquities minister for briefing on progress (Egypt)
(15 August 2016; Egypt Independent)
Among other things, the president is meant to get an update on anti antiquities smuggling efforts.

Timbuktu attacks in focus as jihadi’s International Criminal Court trial opens (Mali)
(19 August 2016; The Japan Times)
“Experts hope the trial and sentencing of Ahmad al-Faqi al-Mahdi for the 2012 attacks on Timbuktu will send a message that such cultural destruction will not go unpunished.”

Racism and ruins — the plundering of Great Zimbabwe (Zimbabwe)
(18 August 2016; The Guardian)
An interesting article with a short mention of destruction caused by European treasure hunters.

Opposing Corporate Theft of Mayan Textiles, Weavers Appeal to Guatemala’s High Court (Guatemala)
(14 August 2016; Truthout)
“Currently, the laws of Guatemala do not protect the intellectual property rights of the designs of Indigenous clothing. This has left traditional Mayan designs open to theft by transnational companies looking to exploit and appropriate Mayan identity.”

Cathedral locking its doors between Masses in response to crime (USA)
(14 August 2016; The Wichita Eagle)
The June theft of an icon has caused the cathedral to reduce its open hours.

Peter Doig Testifies in Bizarre Authentication Trial, Calls Claim Against Him Unethical (USA)
(16 August 2016; ArtNet News)
“Is that you? No. Have you ever been to Thunder Bay? No. Do you have any criminal record in Canada? No. Were you ever prevented from traveling to the US because a drug conviction? No.”

Plea bargain in case of removal of Native American artifacts (USA)
(16 August 2016; The Daily Mail)
“Bourne agreed to pay $249,372 to cover the costs of curating and storing about 20,000 relics that federal agents found in his home”, but will not see any jail time.

Norton Simon Museum can keep Cranachs, California judge decides (USA)
(17 August 2016; The Art Newspaper)
The judge “faulted the Goustikker family and the firm that handled its post-war affairs for failing to meet mandated deadlines for filing an ownership claim to the pictures.”

National Gallery returns drawing to heir of Holocaust victim (USA)
(18 August 2016; WHIO)
“The National Gallery of Art has returned a 200-year-old drawing to the heirs of an Austrian woman who had to sell it during World War II and later died in the Holocaust.”

Jeff Koons Revealed as Mystery Artist at Heart of $6 Million Lawsuit Against David Zwirner (USA)
(18 August 2016; ArtNet News)
Moretti claims that Zwirner was meant to sell him second work in an edition of three, but attempted to sell him a numbered cast instead, with a claim that the work’s value was damaged.

‘He’s entering the cannon’: Richard Diebenkorn Foundation will issue catalogue raisonné this fall with Yale (USA)
(18 August 2016; Art New)
After fakes of the artist’s works featured in the Knoedler trial, there’s a move to pin down the his catalogue.

Paint and Switch? Did Alec Baldwin Pay $190,000 for the Wrong Picture? (USA)
(13 August 2016; The New York Times)
Baldwin says that Mary Boone sold him a different Bleackner than the one he wanted, passing it off as the original after the artist had a go over it.

Alec Baldwin, the Bait-and-Switch and ‘Original Copies’ (USA)
(17 August 2016; Observer)
“So the real mystery becomes: what have we have not yet learned about the case that makes the DA say that a criminal case cannot be made? “

Crook steals, then returns painting to Chelsea hotel (USA)
(16 August 2016; Daily News)
Not The Chelsea Hotel but a hotel in Chelsea. The thief paid his bar tab, took the painting, then posted it back.

Former French culture minister calls for halt to restoration of Galerie Vivienne (France)
(18 August 2016; The Art Newspaper)
“The character of the 19th-century glass-covered gallery, a National Historic Monument, would be wiped out by the renovation, Jack Lang says”

In the frame: We chat to ‘art detective’ Arthur Brand (Netherlands)
(20 August 2016; Belfast Telegraph)
A discussion of Brand’s work and recent recoveries.

It takes a hoaxer and a negligent hoaxed for a Piltdown Man (UK)
(15 August 2016; The Australian)
Art and artefact hoaxers, to be successful, must give the audience what they want.

Two men arrested over attempted theft of Banksy copy (UK)
(15 August 2016; The Guardian)
Arrested for stealing a non-Banksy copy of a previously-stolen Banksy.

‘Irreplaceable’ Tudor window ‘stolen to order’ from chapel (UK)
(16 August 2016; BBC News)
Stolen to order idea comes from the fact that the piece is known and recognisable, but not any real evidence.

UK Museum Ethics Committee Rejects Allegations of Corruption in BP’s Sponsorships (UK)
(17 August 2016; Hyperallergic)
“The Association’s Ethics Committee announced today that it found no violations of its Code of Ethics from the provided evidence, which contained internal emails and memos from the British Museum, Science Museum, Tate, and National Portrait Gallery that Art Not Oil acquired through Freedom of Information Act requests.”

Surrey charity ‘devastated’ after life-sized fiberglass cow stolen in the middle of the night (UK)
(19 August 2016; Evening Standard)
The the rustled cow, named Cycling Moo Kay, was one of 60 on show throughout the county

BFG Dream Jar that was set to raise thousands for Save the Children vandalised in Glasgow (UK)
(19 August 2016; Evening Times)
“The Dream Jar, designed by artist Caio Locke, was placed outside Glasgow’s Gallery of Modern Art as part of a UK-wide display.”

St Peter Mancroft memorial desecrated after “disgraceful” theft (UK)
(13 August 2016; Eastern Daily Press)
A commenter suggested this was an anti Christian act, however as the cross was bronze it seems more like metal theft for scrap.

Gold and silver religious items stolen from Newton-le-Willows church (UK)
(18 August 2016; Liverpool Echo)
“The burglars smashed a ground floor window to get in before taking a number of items, including seven silver chalices, a gold chalice and a gold-coloured dome-shaped tabernacle.”

Brass ornaments stolen from Chelmondiston Church (UK)
(19 August 2016; East Anglian Daily Times)
“Two brass tips from the churchwardens’ staves located in holders at the back of pews at St Andrews Church were stolen”

Police appeal for information following silver theft from Gloucestershire church (UK)
(19 August 2016; Antiques Trade Gazette)
The items taken from a church in Blockley, near Moreton-in-Marsh, include a George II silver communion set from 1732.

Decendant of Joseph Banks’ servant supports repatriation of Gweagal artefacts (Australia, UK)
(15 August 2016; Bega District News)
“My personal opinion about the British museums is that they should aim to repatriate, in a timely manner, all stolen or misappropriated exhibits on application from descendants, organisations or governments once their provenance has been proven”

It’s time rock art was better protected (Australia)
(17 August 2016; Apollo)
“Why would someone do this — desecrate ancient and important cultural heritage?” Good questionl.

Polynesian sculpture admired by Picasso and Henry Moore far older than previously thought (French Polynesia, UK)
(15 August 2016; The Art Newspaper)
The sculpture, which was taken from Rurutu in 1821, may be the oldest yet found in Polynesia.

Tomb raiders jailed in Liaoning Province (China)
(17 August 2016; Shanghai Daily)
A gang of 38 were jailed after being convicted of 36 antiquities looting cases. A metal detector was used.

6 panchaloha idols stolen from Tiruvotriyur temple (India)
(21 August 2016; The Hindu)
“According to police, the temple idols have been kept inside an enclosure. When the priests opened the temple on Saturday morning, they found the iron-grille broken and idols missing.”

Burglars strike in temple; loot gold, silver and cash (India)
(21 August 2016; The Hindu)
Among the items taken from this Tamil Nadu temple was the gold crown of the deity.

Minority Hindu Malaysian Community Concerned Over 7 Temple Attacks by Extremists in 3 Months (Malaysia)
(17 August 2016; The Chakra)
A rundown of the vandalism at various Malaysian Hindu temples.

Trial Resumes for Man Accused of Defrauding Art Collecting Widow of $817,000 (Singapore, China)
(15 August 2016; ArtNet News)
An elderly Singaporean woman allegedly gave a former tour guide $500,000 SGD for a painting by Xu Beihong. It, of course, was a fake.

Smithsonian, other agencies protect artifacts in Iraq, Syria (Syria, Iraq, USA)
(19 August 2016; The Washington Post)
The various US-based organisations involved in all this.

Antlers Hunter S Thompson stole from Hemingway’s home returned to family (USA)
(15 August 2016; The Guardian)
Thompson took the giant set in 1964 after the author’s death because he “got caught up in the moment”.