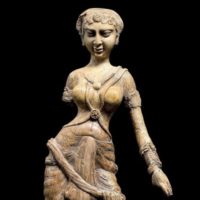 A relief of King Nectanebo II recovered to Egypt from Paris (Egypt, France)
(3 July 2016; Ahram Online)
The piece was taken from a temple at Saqqara in the 1990s.

What Central Africa’s War on Poaching Can Teach Us About Fighting the Plunder of Antiquities (Tanzania, South Africa, Kenya)
(5 July 2016; Hyperallergic)
Considering tools from this parallel illicit trade to better understand how we can approach antiquities trafficking.

Heirlooms stolen from a Japanese-Canadian family in 1943 back in B.C. (Canada)
(5 July 2016; CBC)
Eikichi Kagetsu’s property, wort $8 million today, was forcibly seized by the Canadian government and included things like historic scrolls.

The nagging question behind the mysterious theft of a $7.5 million golden eagle (Canada)
(7 July 2016; National Post)
The level of crazy is high in this story. Very, very high.

Avedon, Unsigned (USA)
(1 July 2016; The New York Times)
The printer of In the American West understood he’d be paid in signed prints. He has the prints but they aren’t signed. Who owns them is the question.

Legal Fight Heats Up Over Peter Beard Photo Show in Hampton (USA)
(1 July 2016; ArtNet News)
The photographer has threatened legal action against an art gallery over the ownership of the pics in the show

Vandals steal items from World War II memorial in Fall River (USA)
(3 July 2016; WPRI)
A purple heart metal and a vial of sand from Iwa Jima were stolen from the memorial.

Is Nate Murphy Holding a Dinosaur for Ransom? (USA)
(5 July 2016; Inverse)
The tense divide between commercial fossil hunters and scientists. In this case, the person holding the dino is a convicted fossil thief.

Peter Doig Says He Didn’t Paint This. Now He Has to Prove It. (USA)
(7 July 2016; The New York Times)
A truly mad case, a US jude is forcing the famous artist to prove, more or less, that he wasn’t at a certain place painting a certain painting as a teenager in 1976. He wasn’t, but how do you prove you were anywhere at age 16?

Lawyer Questions Competence Of Aging Gangster Tied To Infamous Gardner Art Heist (USA)
(7 July 2016; Hartford Courant)
Robert Gentile will turn 80 this month and his memory is slipping. His attornies are woried that he may not longer understand the charges against him.

Next week could be turning point in Bears Ears debate: Bishop to unveil bill (USA)
(8 July 2016; The Salt Lake Tribune)
Some areas with sensitive sites are being proposed for protection. Will this settle the dispute?

Acoma Pueblo sacred shield stolen, Pueblo fights to get it back (USA)
(7 July 2016; KOAT)
The shield was pulled from the Paris auction because of statements that it was recently stolen, rather than distantly stolen.

Arizona, New Mexico senators team up to prevent sale of tribal items (USA)
(8 July 2016; Cronkite News)
“Arizona and New Mexico lawmakers teamed up this week to sponsor a bipartisan bill that would prevent the auction of sacred tribal items.”

Those Italian Artifacts Actually Were Looted, Danish Museum Now Says (Denmark, Italy)
(5 July 2016; The New York Times)
The pieces in the Ny Carlsberg Glyptotek art museum were stolen from a tomb near Fara and passed through the hands of Robert Hecht.

Denmark returns stolen gold cart of Etruscan prince to Italy (Denmark, Italy)
(6 July 2016; The Local)
“As part of the agreement to return the artefacts, Italy will provide the Danish museum with different Etruscan treasures on long-term loans”

German Parliament passes controversial law to protect cultural heritage (Germany)
(9 July 2016; The Art Newspaper)
The controversy is more on the art export half and less on the antiquities import half.

Russian Protest Artist Stripped Of Havel Prize Over Support For ‘Partisans’ (Russia)
(8 July 2016; Radio Free Europe)
They withdrew the award after “he pledged to devote the $42,000 in prize money to the legal defense of convicted police killers in Russia’s Far East.”

Giacometti art trove at centre of Franco-Swiss legal tussle (Switzerland, France)
(4 July 2016; The Daily Mail)
The “Alberto and Annette Giacometti Foundation alleged that the works had been stolen decades ago”/

In an experiment to slow visitors down, British museums are hanging fake art alongside their masterpieces (UK)
(2 July 2016; Quartz)
This is part of a TV show called “Fake! The Great Masterpiece Challenge”

Castle Cary man claimed £8,500 painting theft was ‘drunken prank’ (UK)
(3 July 2016; Somerset Live)
Apparently the man and a friend ran out of the gallery with the painting while laughing.

Conservators issue warning after reports of metal detecting at Link Common (UK)
(5 July 2016; Malvern Observer)
Several reports have been received of people illegally detecting and digging in a protected area

Hat belonging to late author Roald Dahl swiped from Southport exhibition (UK)
(6 July 2016; Liverpool Echo)
It “was pinched from a display at the Atkinson gallery on Lord Street”

Two more antiquities may have to be returned by the National Gallery of Australia to India (Australia, India)
(4 July 2016; The Sydney Morning Herald)
Deena Dayalan sold the pieces to Subhash Kapoor who sold them to the NGA.

Cambodia cracks down on scantily clad visitors to Angkor (Cambodia)
(7 July 2016; The Guardian)
They say that the site is a temple and that skimpy clothing shows “show disrespect to our beautiful culture and tradition”.

Over 200 artefacts recovered from idol smuggler’s bungalow (India)
(4 July 2016; The Hindu)
A spectacular haul including architectural elements among the idols.

Police wait for ASI to inspect antiques (India)
(5 July 2016; The Hindu)
They’ve inspected the items from Lakshminarayanan gallery but not his bungalow.

Vessels, puja items stolen from temple (India)
(6 July 2016; The Hindu)
They were stolen from Anjaneyar Temple at Venkatachalapuram

Kohinoor, the mountain of light (India)
(7 July 2016; The Hindu)
A short history of the controversial diamond.

Kashmiri Pandits protest over vandalization, theft in temples at Valley (India)
(7 July 2016; Daily Excelsior)
A tense situation as the government is accused of not protecting temples from theft and destruction.

Third Hindu temple in Penang vandalised (Malaysia)
(4 July 2016; The Star)
“A statue of the deity Mathuraiveeran (warrior god) was smashed while a copper figure of Amman (goddess of Shakti) was stolen. “

Modification, demolition of ancient structures stayed (Pakistan)
(5 July 2016; Dawn)
A Peshqwar High Court has places a stay on the dismantling of several ancient structures, including 3 Hindu temples at Kashmir Camp in Sarafa Bazzar.

Lee Ufan Refuses Police Request to Confirm 13 Forgeries of His Work (South Korea)
(5 July 2016; ArtNet News)
Police and a man facing forgery charges say the works are fake. The artist who allegedly didn’t make them says they are real.

A Forger Confessed to Faking Millions in Lee Ufan Works—Now the Artist Says They’re Real (South Korea)
(6 July 2016; Artsy)
Indeed, Lee Ufan gets to decide what is real and what isn’t when it comes to his art.

Seven arrested for illegal excavation of ancient clay pots (Sri Lanka)
(5 July 2016; Hiru News)
The group were caught at Nandimithragama archeological site in Bogaswewa, Vavuniya. They were selling the pots to foreigners.

Renowned Iranian artist Parviz Tanavoli barred from leaving country (Iran)
(2 July 2016; The Guardian)
He was due to fly to London to speak at the BM. It is not clear why his passport was taken.

Netanyahu unwittingly secreted original Auschwitz blueprints to Israel (Israel, Poland, German)
(7 July 2016; The Times of Israel)
‘Historian Ralf Georg Reuth, a senior correspondent for Welt am Sonntag, told JTA at the time that he suspected the documents came “through the black market.”‘

Louvre Abu Dhabi to host summit on culture versus terrorism (UAE)
(5 July 2016; The Art Newspaper)
“A high-level, international conference on terrorism versus culture, led by the French president François Hollande and the president of the UAE, Sheikh Khalifa bin Zayed Al Nahyan.”