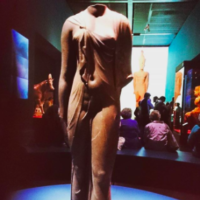 Egyptian Embassy in Paris Retrieves Stolen Artefact (Egypt, France)
(30 June 2016; All Africa)
The piece was returned by the auction house Millon after it was confirmed that it came from the Sakkara archaeological site.

Japanese-Canadians’ stolen history brought to light (Canada)
(29 June 2016; Times Colonist)
In the 40s the Canadian government seized and sold the property of Japanese-Canadians, now it is being searched for.

Jehovah’s Witnesses accused of destroying ancient religious site in Mexico (Mexico)
(29 June 2016; Vice)
The Otomí site called Mayonikha has been desecrated; a local academic says nearby Jehovah’s Witnesses have confessed to the destruction.

Unique sculpture mysteriously missing from Albuquerque art gallery (USA)
(26 June 2016; KRQE News)
The artist wonders if the subject matter, two men about to kiss, caused someone to steal it because they felt it was controversial.

$2K Mural on East River Waterfront Stolen Days After it Was Unveiled (USA)
(27 June 2016; DNA Info)
The banner was attached by double braises steel ties but was taken anyway.

Two arrested after art theft attempt at airport (USA)
(28 June 2016; Spotlight News)
The two men arrested for the attempted theft were at the airport to pick up a colleague.

Uniform, military medals of late WWII POW stolen from his family in Fort Worth (USA)
(29 June 2016; The Dallas Morning News)
The medals and uniform were stolen from a storage unit.

ART: Thieves walk off with gallery paintings (USA)
(29 June 2016; The News Guard)
The works by Kay Klose were taken from a Lincoln City, Oregon gallery

Man Returns Thomas Kinkade Jesus Statue After Stealing It 2 Years Ago, Asks for Forgiveness (USA)
(30 June 2016; Christian Post)
The anonymous person took the piece from a gallery in Zionsville, Indiana.

AIA Members Speak in Favor of Continued Protection of Artifacts from Bolivia and Greece (USA, Bolivia, Greece)
(30 June 2016; Archaeological Institute of America)
A review of the recent The US State Dept Cultural Property Advisory Committee Meeting by Nathan Elkins

This ‘Holocaust hustler’ makes a living off of Nazi-stolen art (USA)
(2 July 2016; New York Post)
A take down article of James Palmer of Mondex Corp.

Our View: Keep pressure up to restore artifacts (USA)
(26 June 2016; Santa Fe New Mexican)
“Pressure needs to continue so that foreign governments ensure that relics and tribal artifacts are returned.”

What Germany’s tough new law could mean for the antiquities market (Germany)
(27 June 2016; The Art Newspaper)
One sector’s unease about the law is another sector’s joy. Laws regulating the illicit trade aren’t meant to make potential illicit traders happy.

Metal detectorist who struck gold with Bronze Age ring during illegal search is fined after touting it to a museum (UK)
(27 June 2016; The Telegraph)
The man has been a detectorist for 11 years and knew what he was doing was wrong.

Painting worth thousands stolen from cottage (UK)
(28 June 2016; ITV News)
The painting, Hope in Prison by Sir Edward Coley, was once of several things taken from the Sussex property.

‘Heartless’ burglars smash up church with sledgehammers (UK)
(29 June 2016; Leigh Journal)
They cut a Victorian lectrn to pieces and pulled 20th century wood paneling from the walls as well as smashed furniture and icons.

Welcome home party for Devon church’s priceless panels (UK)
(29 June 2016; The Herald)
The pieces were stolen from Holy Trinity Church, Torbryan in 2013 and have since been recovered and reinstalled.

To Cite or to Steal? When a Scholarly Project Turns Up in a Gallery (UK)
(30 June 2016; Hyperallergic)
Are Jason Shulman’s much lauded works lifted from Kevin L. Furguson?

Vandalised Belfast war memorial to be rededicated during Somme service (UK)
(30 June 2016; Belfast Telegraph)
“The European Great War Memorial in Woodvale Park in the Shankill area was attacked in May”

5-star hotel employee held for temple theft (India)
(29 June 2016; The Times of India)
The man was arrested for stealing jewellery from an idol in a temple in New Friends Colony.

HC to hear plea on irregularities in National Art Gallery (India)
(30 June 2016; The Hindu)
Allegations that the NGMA isn’t being run properly and objects are at risk of being stolen.

16 heritage sites facing extinction (Nepal)
(26 June 2016; The Himalayan Times)
Even before the earthquake these sites were under threat. The Department of Archaeology is giving equal priority to other major sites.

The politics and poetry of restoring war ruins (Syria)
(29 June 2016; Gulf News)
Continued controversy over the idea of rebuilding.

Man pleads not guilty to murder of Oxford book dealer (UK)
(1 July 2016; The Guardian)
Dealer Adrian Greenwood was found stabbed in his home in April

Ford dealership uses art from Firewatch for ad — without permission, of course (USA)
(28 June 2016; ZAM)
It is quite clear that the art used by a local car dealership advert was stolen from a video game.

Saugerties street art vandalized (USA)
(1 July 2016; Saugerties Times)
What kind of monster would vandalize “Bathorse”, which is exactly what it sounds like?