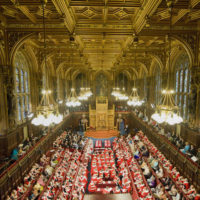 Exactly what I want our policymakers to be saying.

As many of you know, the United Kingdom is finally moving to ratify the Convention for the Protection of Cultural Property in the Event of Armed Conflict, a.k.a the Hague convention. I say finally because the convention was written in 1954. Thus the UK is late to that particular protection party, and many involved seem to know it. 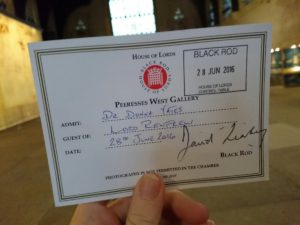 In the lead up to this signing I’ve been attending quite a few related events, some of which I will write about next week when I have a break from them. Last night I attended the House of Lords “Committee Stage” of the bill, just to listen to discussion. I must say, I was impressed at the level of nuanced understanding of the issues involved in antiquities trafficking in the room, of course from Lord Renfrew who is an expert in this field and invited me, but also from the the other peers. I got the distinct impression that beyond just paying attention, those discussing this bill honestly cared.

The discussion is already up on Hansard and for those of you interested in probing amendments and cultural property, you might have a skim of it over your morning coffee. I was particularly impressed with a contribution from Nicholas Trench, the Earl of Clancarty. He gets it. Totally gets it. I think it’s worth reposting here in its entirety. This is how lawmakers are talking about antiquities trafficking, they know that demand causes supply, that the market is corrupt, and they see every need for market transparency.

You can go straight to his comments here, and it is worth reading Baroness Bonham-Carter and and Lord Howarth’s afterwards. All emphasis mine. Take it away, Earl of Clancarty:

My Lords, I shall speak to Amendment 18 in this group, and I thank the noble Lord, Lord Redesdale, and the noble Baroness, Lady Bonham-Carter, for their support for this amendment.

I am attacking the problem from the other end to the noble Lord, Lord Collins. The purpose of the amendment is to remove the long-standing culture of secrecy in the art and antiques trade in the UK, which is a hindrance to the protection of cultural property. London is the second-biggest antiquities market in the world and is perhaps the biggest for Islamic objects. Last year, UNESCO stated that looting in the Middle East is operating on an industrial scale. We know that there is significant illegal trade in London in antiquities from the Middle East from considerable anecdotal evidence and from undercover research, such as that carried out for the excellent Channel 4 “Dispatches” programme, to which the noble Baroness, Lady Bonham-Carter, referred at Second Reading, in which Dick Ellis, the founder and former head of the Metropolitan Police art and antiques Unit, which the noble Baroness, Lady Berridge, and the noble Lord, Lord Howarth, referred to earlier, said that the current three-person team of that unit is simply not large enough to deal with the problem.

I say at the outset that the antiques trade and auction houses do an important job. I am not against the trade, which according to the British Art Market Federation’s website, was worth £9 billion in 2014. Indeed, I am one of a large number of people up and down the country who have bought items at auction, of whatever value. However, the convention of maintaining the secrecy of both sellers and buyers is wrong, and runs counter to everything that art historians and archaeologists try to do, which is to build a historical record and discover the provenance of an object. It is worth saying that the major part of the meaning of cultural property lies in its provenance, often as part of that property’s original environment. Where art historians, experts in ancient manuscripts and other experts try to lift the lid on history, the art and antiques trade obfuscates. Auction houses sometimes provide provenance—sometimes whole auctions will be dedicated to the sale of items owned by a particular celebrity collector, for example. However, the auction houses do this selectively when it suits them, when it is clear that it gives a sale a particular cachet; it is not the general rule.

To peg this amendment to the Bill, it is rightly framed in terms of looted property, but there are other reasons to have the amendment. There is the protection of our own cultural property to consider, whether or not it is looted, and we should not be complacent about that protection. I stand corrected by the Minister when she said at Second Reading that there had been one prosecution under the Dealing in Cultural Objects (Offences) Act 2003—just one, it has to be added, in the last 13 years. My substantive point, which was that there had been no prosecutions for looting in the Middle East—the purpose for which the Act was set up in the first place—still holds. The one prosecution, which happened in the last few weeks, is of someone who stole religious artefacts from churches in the UK. Nevertheless, this is instructive in itself, since to make this looting worth while there have to be buyers for such stolen property.

The art and antiques trade of course says that it is doing what it can to tighten up checks on provenance internally and adheres to its voluntary code of due diligence, but that is not good enough—we need transparency. We expect transparency in so many other walks of life, and we should expect it in the dealing of cultural objects. This brings me to the third good reason for this amendment, which is simply that it is an issue of consumers’ rights. Thinking in particular about the possibility of introducing object passports, I do not see why, if in the instance of buying a car we have the right to know its history and previous owners, and have a logbook as proof of that, we do not grant the same rights for the purchase of an artefact above a certain market value. What is it about being a seller or a buyer that is so shameful that one cannot be revealed to the other, let alone to the rest of the public? When I have bought something at an auction, or even wanted to, what I want to hear from the auction house if I ask them for information on the item is not, “Oh, we can’t tell you who the seller is, sir, we have to protect their confidentiality, but we will absolutely provide you with as much information as possible about the object’s history”. Until we have a culture of openness, one that will allow the object to be tracked back from the current buyer, however that purchase is made—of course many purchases are now made online—we have an unhelpfully secretive art and antiques market that breaks the links of the historical record for the object at every transaction in its history.

The transcript of the whole session regarding the 28 June 2016 discussion of the Cultural Property (Armed Conflict) Bill is here.