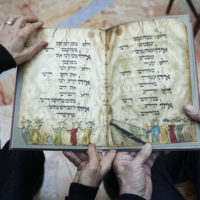 Have a look at the Culture Crime News media database.

Lobengula Spear, Artefacts Stolen (Zimbabwe)
(9 June 2016; Zim Eye)
The pieces which belonged to the last Ndebele King were taken from the historic site of Old Bulawayo.

King Lobengula stolen ‘golden spear’ a replica (Zimbabwe)
(12 June 2016; Bulawayo 24)
A theft from a museum is still upsetting, but these were props, not artefacts.

Denuncias de INAH por ataques a zonas arqueológicas del estado (INAH criticised over attacks to archaeological sites in the state; Mexico)
(9 June 2016; Criterio)
At least 4 investigations have been made this past year into looting in Hidalgo.

Non-profit for late caricaturist Al Hirschfeld sues NY gallery (USA)
(8 June 2016; Metro)
The Al Hirschfeld Foundation is ending association with Margo Feiden but the lawsuit itself is sealed so it is unclear why.

U.S. Museums Trying to Keep Jewish Artwork Stolen By Nazis (USA)
(8 June 2016; The Washington Free Beacon)
The accusation is that the museums are trying to sit out the statues of limitations on claims for pieces.

Nevada Court Says Bus-Turned-Ship for Burning Man Is Not Art (USA)
(9 June 2016; ArtNet News)
A “Nevada property owner does not owe any money to two artists for burning and scrapping a school bus they had converted into a Spanish-style galleon ship”

Bronx Museum’s Cuban Art Exhibit Delayed Amid Fears of Seizure (USA, Cuba)
(10 June 2016; DNA Info)
“The collection of state-owned art from Cuba faces the possibility of seizure in the United States, as a result of legal claims made by Americans whose property was stolen by the Fidel Castro regime after it assumed power in 1959, officials said.”

Musée Girodet: «L’eau a submergé des centaines d’œuvres d’art» (Girodet Museum: “Water has flooded hundreds of works of art”; France)
(6 June 2016; Le Figaro)
The off-site storage facility has been cleared of water but the collection is in very bad shape.

Relic of Pope John Paul II stolen from Cologne Cathedral (Germany)
(5 June 2016; Business Insider)
The stolen item is a cloth with a drop of JPII’s blood on it.

Athens Mayor to Remove City Statues for their Own Protection (Greece)
(9 June 2016; Greek Reporter)
They’ve determined that 49 statues are safe, but others in vandalism-prone areas will be replaced by casts.

Arte Ritrovata showcases recovered art (Italy)
(8 June 2016; ANSA)
The Carabineri’s museum in Rome will be hosting an exhibition of stolen and recovered art and artefacts through 3 July.

‘Stolen’ painting returns to presidential palace (Poland)
(6 June 2016; Radio Poland)
The pieces were reported missing in September and were spotted in an auction catalogue

Auschwitz Museum lost, then found 16,000 belongings of Holocaust victims (Poland)
(8 June 2016; The Christian Science Monitor)
The pieces were uncovered in 1967, catalogued, then forgotten about during Poland’s political crisis. They were re-found in the Polish Academy of Sciences.

Moscow Roadworks Damaging Archaeological Remains, Activists Say (Russia)
(6 June 2016; The Moscow Times)
The work appears to have hit the cellar of the demolished Church of St. Dmitry of Thessaloniki

Russian political artist Pyotr Pavlensky released from custody with $15,000 fine (Russia)
(8 June 2016; The Art Newspaper)
This is for setting fire to the FSB ‘heritage’ doors; he is refusing to pay.

Tres detenidos por 35 robos en colegios e iglesias (Three arrested for 35 robberies in schools and churches; Spain)
(9 June 2016; Europa Press)
The group would case the locations in various provinces during the day, then loot them at night.

Experts help Geneva free port crack down on stolen loot (Switzerland)
(8 June 2016; Swiss Info)
The free ports are deploying their own measures for checks as they say they can’t wait for Swiss customs to get around to it.

Stolen Old Masters returned to Italy after discovery by British owner (UK, Italy)
(7 June 2016; BT)
The pieces were stolen in 1994; 20 years later the good faith buyer who ended up with them checked the Art Loss Register and found they were stolen.

Revealed: how altarpiece broke in disastrous fall at London’s National Gallery (UK)
(9 June 2016; The Art Newspaper)
The piece fell from an easel overnight and the damage in 1989 was not malicious, however the museum covered it up and didn’t publicly report the accident.

British doubts over Joan of Arc’s ring (UK, France)
(9 June 2016; The Art Newspaper)
It was not removed from the UK with the proper paperwork and may not be Joan’s anyway.

PLUNDERED: Stone thefts are stripping away our heritage (UK)
(3 June 2016; Telegraph & Argus)
Historic pavements are being stolen, presumably to use the valuable and rare stone for new builds.

With New Book, Quest to Recover Stolen Battambang Statues Begins (Cambodia)
(7 June 2016; Cambodia Daily)
“The Ministry of Culture released a book on Monday of about 68 Khmer sculptures that were stolen from museums in Battambang City during decades of war and conflict”

Idol stolen in Tirupur turns out to be fake, three suspected smugglers released (India)
(6 June 2016; The Times of India)
A bad tip: the men weren’t smugglers and the idols were not ancient. One of the men was a mystic.

Police clueless on Thanjavur temple theft (India)
(9 June 2016; The Times of India)
The Sri Abhishta Varadharaja Perumal temple had no CCTV and their alarm didn’t function.

PM Modi’s quest to bring back cultural artefacts started in 2003 (India)
(8 June 2016; The Times of India)
Documenting the recent history of official returns of cultural property to India.

Idol trackers elated as Ganesha set to come home (India)
(8 June 2016; The Hindu)
A true team effort to identify these objects and return them to India.

The American Who Rescued The Saint (India, USA)
(8 June 2016; Swarajya)
A profile of HSI agent Brenton Easter and his role in operation Hidden Idol

Ganesh and his mother return home from US with Modi (India, USA)
(9 June 2016; India Today)
More information about Operation Hidden Idol and the return of objects on PM Modi’s official visit.

ASI team inspects idols seized from smuggler (India)
(7 June 2016; The Times of India)
The expert team has visited the Alwarpet home of smuggler Deenadhayalan to take stock of the seized pieces.

50 more idols, paintings recovered from smuggler (India)
(12 June 2016; The New Indian Express)
What is shaping up to be a massive seizure: 50 more idols, 30 more paintings, on top of the circa 100 already seized.

Malaysian artist charged for depicting PM as clown (Malaysia)
(6 June 2016; The Daily Mail)
Fahmi Reza has apparently violated the law with his caricature

Daesh claims to destroy yet another ancient Iraqi temple (Iraq)
(7 June 2016; Daily Sabah)
This time the Temple of Nabu.

Driver smuggled antiquities in Norwegian Ambassador’s car (Israel, Palestine, Jordan)
(6 June 2016; Israel National News)
10 kg of antiquities were recovered and the driver was arrested. The Norwegian Embassy is not thought to have been involved in the smuggling.