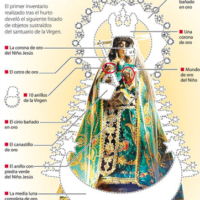 Irina Bokova: the woman standing between Isis and world heritage
(3 June 2016; The Guardian)
A profile of the UNESCO Director General.

Egypt’s National Committee for the Repatriation of Stolen Antiquities resumes activities (Egypt)
(1 June 2016; Ahram Online)
This is after a six year pause.

Historic coins stolen from museum (Bermuda)
(3 June 2016; The Royal Gazette)
The coins, some dating as far back as 1200, were stolen from a display at the Bermuda Historical Society Museum.

Missing: Horse skull from Yukon’s Carcross desert (Canada)
(30 May 2016; CBC)
The skeleton was excavated by archaeologists and only hours later, the skull was taken.

Golden Eagle statue stolen in Delta, valued at $6 million (Canada)
(30 May 2016; Vancouver Sun)
The base of the stolen statue features the Atocha star, an emerald recovered from a shipwreck.

The battle between artists and fraudsters in today’s digital age (Canada)
(3 June 2016; BC Business)
“A copyright fight against Goliath, David can still win, say legal experts”

Is this Dutch Artist Accusing Duke Riley of Pigeon Plagiarism? (USA)
(31 May 2016; ArtNet News)
Artist Jasper van den Brink says that Riley’s idea is ‘identical’ to his own idea, published in 2006. Does he have a case?

Sale of Depression-era painting draws a federal lawsuit (USA)
(31 May 2016; The Daily Mail)
The General Services Administration is now progressively pursuing artworks that they consider to be lost or stolen.

Darwin letter stolen from Smithsonian 30 years ago has been found (USA)
(2 June 2016; The Washington Post)
An intern pocketed the letter 30 years ago.

Stolen Art From Dead City Museum Creator Located (USA)
(2 June 2016; CBS)
A fire may have been set to cover up the theft of between 30 and 40 rubber molds two years ago.

Pricey Painting Found (USA)
(2 June 2016; CBS)
Police are not “revealing details about who stole the Henry Farny oil painting because the owner has declined to press charges.”

US Senate committee submits private museum findings to Internal Revenue Service (USA)
(2 June 2016; The Art Newspaper)
Surprise: private museums benefit their founders more than the public yet they are taxed like the opposite is the case.

Portrait by Adolph Menzel Among Latest Artifacts Recovered by the Mosse Art Restitution Project and Sold at Auction (USA)
(3 June 2016; PR Newswire)
Part of the art collection looted from the Mosse family by the Nazis in 1933.

Jail for woman who plundered famous photo prints (USA)
(3 June 2016; Philly.com)
The woman was handed a prison sentence for the theft of various prints including the famous National Geographic Afghan Girl.

Bill to punish grave robbers sent to governor’s desk (USA)
(4 June 2016; WWL)
The Louisiana house unanimously approved this measure in an effort to curb the trafficking of human remains.

US hails ‘small victory’ as Paris auction withdraws Native American shield (USA, France)
(30 May 2016; France 24)
The other 313 items were still put up for sale.

Paris auction house cancels sale of Acoma shield (USA, France)
(30 May 2016; Albuquerque Journal)
“It was withdrawn this morning pending further investigation,” as it may have been stolen in the 1970s.

Acoma shield being auctioned in Paris (USA, France)
(30 May 2016; Albuquerque Journal)
A desperate last call to halt the auction of sacred and stolen items.

Editorial: Acoma shield closer to home (USA, France)
(5 June 2016; Albuquerque Journal)
“[T]he shield is safe for now from collectors who would deny the tribe an important piece of its religious and cultural heritage”

Art Museum theft shows limits of public money (USA)
(3 June 2016; Springfield News Leader)
The Springfield Art Museum had been concerned about their security situation for a few years but budget was a problem.

Thieves Who Stole Warhol Prints From Springfield Art Museum Were Likely ‘Amateurs’ (USA)
(3 June 2016; KCUR)
The Warhol’s are unlikely to have been taken by some sort of ‘pro’ outfit.

Rangers hunt looters who desecrated Civil War battlefield (USA)
(30 May 2016; WUSA)
“The Park Service suspects the looter or looters may have spent days digging in the battlefield”

Louvre and Musée d’Orsay Close in Emergency Measure Against Seine Flooding (France)
(2 June 2016; ArtNet News)
“Both the Louvre and the Musée d’Orsay closed early Thursday in a drastic measure to allow staff to protect artworks from the rising waters of the River Seine.”

Priest nabbed for robbing churches (Greece)
(2 June 2016; eKathimerini)
The priest robbed two churches and a monastery between 1997 and 2016.

Denuncia Diócesis robos a las iglesias (Spain)
(30 May 2016; El Mundo de Córdoba)
The Bishop says that they requested funds for CCTV but they never came.

Vandals damage headstones at Leslie Cemetery, Glenrothes (UK)
(30 May 2016; BBC News)
“More than 65 headstones in a Fife graveyard have been damaged”

Shock after thieves behead angel statue in Cambridge graveyard (UK)
(30 May 2016; Cambridge News)
The grave marker in Mill Road cemetery had its head knocked off and taken.

Tower Hamlets looking for safe place for ‘Old Flo’ after legal battle over who owns Moore’s sculpture (UK)
(31 May 2016; The Docklands & East London Advertiser)
The statue officially belongs to Tower Hamlets, but now they have to make sure it doesn’t get stolen.

Student who scrawled ‘don’t bomb Syria’ in giant black letters on historic World Heritage-listed church opposite Parliament is spared jail (UK)
(1 June 2016; The Daily Mail)
The student defaced St Margaret’s Church which is in Westminster on the Parliament facing wall.

Art crime expert Dr Donna Yates makes her research available free online in bid to help beat the thieves (UK)
(2 June 2016; The National)
Coverage of the new website that goes along with this list: news.culturecrime.org

Found a rare coin? Beware, it could be a fake (UK)
(4 June 2016; Lincolnshire Echo)
Both recent fakes and historic fakes turn up during metal detecting in the UK

Ukranian art buyer hands back stolen Dutch masterpiece (Ukraine, Netherlands)
(31 May 2016; 7 News)
One of 24 paintings that were stolen from the Westfries Museum.

International graffiti artist who travelled to Melbourne to tag jailed for 6 months (Australia)
(31 May 2016; The Age)
Jim Clay Harper also faces 6 months in prison in the US for vandalism offences.

Beloved ‘little old lady’ public art stolen from Hughes shops (Australia)
(31 May 2016; ABC)
Known as Melba to some, the little old lady statue was sawn off at the calves.

Silver articles stolen from temple (India)
(29 May 2016; The Hans India)
The pieces were taken from a temple in Kurnool

US to return 19 stolen Indian artefacts during Modi’s trip (India, USA)
(1 June 2016; Mumbai Mirror)
They are all going back, but one or two will be formally handed over to the Indian PM.

Idol worth lakhs stolen from Jain Temple (India)
(1 June 2016; The Hitavada)
The idols of Lord Vansupujya was taken from a Jain Temple in Nagpur

Cops tracking Kaluchari-era missing idols in US (India)
(2 June 2016; The Times of India)
The pieces were stolen from a museum in Katni district of Madhya Pradesh

Thiruverumbur police recovers stone idols of Hindu deities from Cauvery river (India)
(5 June 2016; The Times of India)
The 7 stone idols were stolen from temples in the region.

Idol smuggling gang busted (India)
(1 June 2016; The Hindu)
“The hunt is on for Deenadayalan, the kingpin who allegedly smuggled the idols to Mumbai.”

Seized idols to be sent to Icon Centre for safekeeping (India)
(2 June 2016; The Hindu)
The 34 seized pieces are going to the Icon Centre in Tiruvottiyur

More idols found in Alwarpet house (India)
(3 June 2016; The New Indian Express)
37 more idols seized from the home of Deenadayalan on top of the 54 seized previously

How much money is ISIS actually making from looted art? (Iraq, Syria)
(31 May 2016; The Conversation)
Some numbers from MANTIS (Modeling the Antiquities Trade in Iraq and Syria)

Israel wards off looters of antiquity high above the Dead Sea (Israel)
(2 June 2016; Yahoo News)
The goal is to excavate everything before it is looted.

Isil rampage: a threat to cultural heritage that belongs to all (Syria)
(31 May 2016; The Art Newspaper)
Getty director James Cuno makes his usual argument.

Syrian troops looting ancient city Palmyra, says archaeologist (Syria)
(1 June 2016; The Guardian)
An extremely misleading headline for an article that uses the past, not present, tense.

Ancient stela lost after discovery (Turkey)
(2 June 2016; Hurriyet Daily News)
The stela was found in March in Konya’s Ereğli district, and has been ‘lost’, so possibly illegally sold.

Crime victim asking P.E.I. to be on lookout for valuable coffee table (Canada)
(1 June 2016; The Guardian)
The stolen table was made of wood from boats wrecked in the 2012 Indonesian tsunami.

Kraftwerk lose legal battle over their music being sampled (Germany)
(31 May 2016; The Guardian)
The court said that “banning sampling would in effect spell the end of some music styles”

Motion filed to drop charges in museum gem theft (USA)
(2 June 2016; News Net 5)
It is unclear why the charges are being dropped, but they could be refiled at any time.

Missing taxidermy sheep reappears — without its clothes (USA)
(3 June 2016; The Durango Herald)
“The once-living and breathing sheep, given to Frank by a group of Navajo ranchers, became a fixture at the art gallery.”

BYU-Idaho students warned by cops after replacing stolen painting with dead rabbit (USA)
(4 June 2016; Fox 13)
These students, as a ‘prank’, stole a painting and replaced it with a bag containing a dead rabbit.