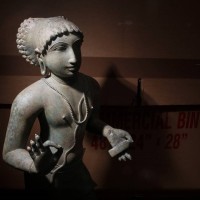 Hot this week: Burying the Kennewick controversy once and for all?

Antiquities Trafficking and Art Crime: free online course
(2 May, Futurelearn)
If you missed our free course, here is your chance to learn a bit about art crime. The course starts on 6 June, but after that you can move at your own pace. I’m looking forward to it.

The Case against the Universal Museum
(26 April 2016; Artsy)
“If museums can honestly address their inherent limitations and treat objects of the past ethically in the present, we may, ever so slowly, build a better future.”

70 years on, the search continues for artwork looted by the Nazis
(30 April 2016; PBS)
A transcribed feature on the return of art taken during the Holocaust

Can technoheritage be owned?
(1 May 2016; The Boston Globe)
‘Items that might be in the public domain start looking more and more like items of private property, subject to the control of a single entity, and part of a culture of ‘hyperownership”‘

The Right to Own Living Memorials (Kenya)
(29 April 2016; Sapiens)
Should we treat Vigango like human remains? ARE they human remains?

Ex-Art Studio Worker Pleads Guilty in ‘Afghan Girl’ Theft (USA)
(25 April 2016; ABC News)
She admitted to conspiring with a gallery manager in Colorado to steal artworks including this famous photo.

Three historical human skulls stolen from Arizona store (USA)
(25 April 2016; Tucson News Now)
One might question why the skulls were sitting there in the first place, but they were not for sale and were stolen.

US Congress approves bill seeking to curb looting and trade of antiquities (USA)
(27 April 2016; Lawyer Herald)
The bill now moves on to the president for signature.

Artifacts stolen from grounds of new Museum L-A in Lewiston (USA)
(29 April 2016; Sun Journal)
The rusted gears and so on were being stored outside of the structure which, presumably, is why they were taken.

Senate hearing could bring Kennewick Man closer to tribal burial (USA)
(27 April 2016; Tri-City Herald)
“This is about doing right by the descendants of the Ancient One, and I will keep fighting to move this bill forward and bring these remains home”

9,000-year-old ‘Kennewick Man’ will receive Native American burial after decades in limbo (USA)
(28 April 2016; National Post)
He is Native American and this the Army Corps of Engineers is working towards with tribes to coordinate a burial.

Plagued by Castrating Vandals, a Public Sculpture Gets a Detachable Penis (France)
(25 April 2016; Hyperallergic)
Arcachon’s Hercules has had his manhood stolen one to many times. The new removable member will be “affixed only during ceremonies”

Stolen Marathon messenger statue to be replaced (Greece)
(25 April 2016; eKathimerini)
The piece erected at Rafina for the Olympic torch relay was stolen, likely for scrap metal.

Roban la corona de oro de la Virgen del Rosario en la iglesia de Gallegos del Río (Gold crown of the Virgin of the Rosary stolen from the church of Gallegos del Río; Spain)
(30 April 2016; La Opinión de Zamora)
This is yet another in a string of church art robberies in the region. It is possible that this is an organized gang.

The Freeport Scandal That Isn’t … a Scandal (Switzerland)
(29 April 2016; Art Market Monitor)
Contrary to what other articles are implying, this article says that art sorts are not leaving the Geneva Freeport due to scandal.

Police missed ‘golden opportunity’ to solve £20k coin heist (UK)
(25 April 2016; Edinburgh Evening News)
A painful story: if this is accurate it seems the police were not taking the national museum theft seriously.

Burglars show ‘act of humanity’ in returning 100 year old medals (UK)
(27 April 2016; Belfast Media Group)
It appears as if the burglars felt guilty about taking the family heirlooms and returned them.

Woodcarving stolen from Kingswood Park (UK)
(28 April 2016; Bristol Post)
The wooden sculpture was cut at its base.

Mungo Man still lies in a cardboard box. Why? (Australia)
(26 April 2016; The Age)
The remains were formally handed back to traditional owners who are temporarily housing him at the National Museum and he remains in limbo.

Karnataka’s ancient idols lost in a mere flash (India)
(25 April 2016; The Hindu)
Some facts and figures on idol theft and return from the India Pride Project.

CCS cops recover 1-cr idol within 24 hours of theft (India)
(27 April 2016; The Hans India)
Apparently after one of the thieves tractor was seized his financial situation became such that he conspired to steal the idol with a friend.

Stolen artefacts: Cops to raid another warehouse (India)
(30 April 2016; The Times of India)
The pieces appear to have been stolen from historic forts and other sites.

18 Antiquities Recovered From Foreign Countries: Government (India)
(25 April 2016; The New Indian Express)
“There is no estimate available with the ASI on the number of the antiquities that are illegally being smuggled outside the country.”

Dagger Stolen From Nehru Memorial Museum Recovered, 2 Held (India)
(28 April 2016; NDTV)
The dagger was stolen earlier this week by two members of cleaning staff and it has been recovered.

Lost-and-found dagger a symbol of Nehruvian era (India)
(29 April 2016; The Times of India)
More on the dagger that was stolen and recovered from the Nehru Memorial Museum and Library

Forget the Kohinoor, could we have the Amaravati Stupa sculptures back please? (India)
(1 May 2016; Scroll.in)
Looking at a whole stupa now in the UK and questioning why Kohinoor is a priority.

Fire destroys Natural History Museum in Delhi (India)
(26 April 2016; The Tribune)
A true tragedy. “In the next two days the extent of damage at the national museum will be know”.

National natural history museum gutted (India)
(26 April 2016; The Tribune)
The fire started at 1:45 AM on the top floors of the museum but the cause has not been determined. A tragic loss.

One year on: an update from Nepal’s earthquake-damaged heritage sites (Nepal)
(26 April 2016; Apollo)
Some movement. Some stagnation.

US returns stolen ancient Buddhist sculpture to Pakistan (Pakistan, USA)
(28 April 2016; BBC News)
This is the piece seized during Asia Art Week. Presumably because the dealer, Tatsuzo Kaku, pled guilty, the piece no longer needed to be held.

Artists in Guggenheim Show Urge Museum to Resume Talks on Migrant Rights in Abu Dhabi (UAE)
(29 April 2016; Hyperallergic)
The artists are troubled by the museum breaking off negotiations with the Gulf Labor Coalition

Revered Chinese monk is mummified and covered in gold leaf (China)
(28 April 2016; The Daily Mail)
The gold covered and mummified Fu Hou has been fitted with an anti theft device.

Kenya Set for Record Ivory Burning (Kenya)
(29 April 2016; The Wall Street Journal)
It is interesting to see that the carved ivory all display Chinese themes.

Hatton Garden vault – from daring heist to ‘fascinating museum piece’ (UK)
(23 April 2016; The Telegraph)
Plans afoot to move the jewel heist vault to the Museum of London as a public exhibit.

Off the Beat and Into a Museum: Art Helps Police Officers Learn to Look (USA)
(26 April 2016; The New York Times)
Walking cops through the Met and quizzing them about what they saw as memory practice.

Suspects indicted in French Laundry wine theft-spree (USA)
(29 April 2016; The Press Democrat)
The wise was stolen during a 2014 at Christmas.