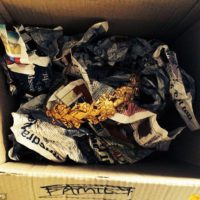 Culture Crime News: a database of antiquities and art crime
We’ve been looking for a way to make my private news database public: here it is. A work in progress, but have a look. Over 3000 art and antiquities crime articles in there.

Antique ivory poses no threat to elephant conservation: in fact, it needs protection itself
(25 May 2016; Apollo)
An argument for excluding very old ivory from bans

Israel returns to Egypt two stolen artefacts (Egypt, Israel)
(22 May 2016; Ahram Online)
The wooden sarcophagi covers were stolen in Egypt and smuggled to East Jerusalem via a Gulf state

Guatemala reclama piezas arqueológicas robadas que se exhiben en el museo Tesak (Guatemala reclaims looted archaeological pieces and they are exhibited in the Tesak museum; Guatemala)
(23 May 2016; El Faro)
After years of red tape and complication, these looted objects are back home and on display.

No paran robos de campanas en Tasquillo (Robbery of bells in Tasquillo not stopped; Mexico)
(22 May 2016; El Sol de Hidalgo)
Another bell has been stolen from a church in the region.

New charges for target of Gardner heist probe (USA)
(24 May 2016; The Boston Globe)
They may not have found stolen art on Gentile’s property but the 79-year-old just racked up a gun charge.

Old Fort burglarized in Fort Madison, Iowa (USA)
(24 May 2016; KWQC)
Among the items taken were three tomahawks and various knives and gun powder.

Enforcing the law, protecting resources: a day in the life of a BLM ranger (USA)
(26 May 2016; St George News)
The front line of heritage protection in the US.

Up to 40 antique wooden benches valued at more than $100K stolen from Springfield’s Union Station (USA)
(26 May 2016; Mass Live)
It is unclear when exactly they were stolen; some were there as late as Jan 2015.

Rare Indian Burial Ground Quietly Destroyed for Million Dollar Houses (USA)
(27 May 2016; Gizmodo)
A complicated situation where the Native American group weren’t on the side of the archaeologists, etc.

New evidence suggests Modigliani masterpiece was obtained in Nazi-forced sale (USA, Panama)
(27 May 2016; CBC)
Turns out Seated Man with a Cane is where everyone thought it was, in the hands of the Nahmad family. It just probably shouldn’t be.

The mystery of the missing Great Miami Hurricane historical marker (USA)
(28 May 2016; Miami Herald)
The historic marker was taken 3 years ago and no one knows what has become of it.

‘An affront to the memory of people who fought’: Looters dig up a Civil War battlefield (USA)
(28 May 2016; The Washington Post)
“Looting at the site is considered a federal crime. Those charged and convicted of the crime can face a fine of up to $20,000 and two years imprisonment”

Veterans sites in 3 states damaged ahead of Memorial Day (USA)
(28 May 2016; CBS)
Memorials in LA and Kentucky were targeted and a Civil War cemetery in Virginia was looted.

Police: $25K oil painting stolen from Connecticut home (USA)
(27 May 2016; The Washington Times)
“The owner was in the process of moving, so the home was apparently unlocked when the artwork was taken.”

Paintings stolen during East Lansing Art Festival (USA)
(24 May 2016; Detroit Free Press)
Bala Thiagarajan, a Chicago artist, said six of her paintings were stolen from a booth at the festival.

Several pieces of art stolen from E.L. festival recovered (USA)
(27 May 2016; Lansing State Journal)
Six out of eleven stolen pieces have been recovered.

Native Americans implore France to halt artifact sale: ‘It harkens to slave auctions’ (USA)
(25 May 2016; The Guardian)
A plea for justice and for the art market to acknowledge Native Americans’ humanity.

Heinrich: Halt French Auction of Sacred Native American Artifacts (USA, France)
(26 May 2016; KRWG)
The Senator has written to Secretary of State John Kerry asking him to intervene in the Paris auction.

The Latest: Officials say Acoma shield was stolen years ago (USA, France)
(27 May 2016; Yahoo News)
A twist: allegations that one of the objects for sale was stolen during a 1970s break in!

The Legal Feud Over ‘Picasso Bust’ Is Settled, but Who’s the Mystery Owner? (USA)
(24 May 2016; ArtNet News)
So who own it? Leon Black or a member of the Qatari royal family?

Germany Backtracks, Will Install Jewish Member in Committee on Nazi-looted Art (Germany)
(27 May 2016; Haaretz)
“Culture minister initially opposed adding Jewish delegate to committee, saying a Jewish member ‘would be the only voice who would be prejudiced.'”

Russian art historian cleared of fraud over forgery sale (Russia)
(27 May 2016; The Art Newspaper)
Elena Basner sold a forged Grigoriev but the court ruled that she made a mistake, she didn’t know it was a forgery.

Ocultar los elementos de valor de los templos a partir de ahora, una de las soluciones (Hide the valuable items of the churches from now on, one of the solutions; Spain)
(23 May 2016; Zamora 24 Horas)
A desperate stop gap for the church theft spate in Zamora: hide the sacred art.

El Gobierno admite el robo en 58 iglesias de Zamora entre febrero y mayo (The Government admits to robberies of 58 churches in Zamora between February and May.; Spain)
(23 May 2016; La Opinión de Zamora)
Formal acknowledgement that there is a spate of thefts occurring in rural Spanish temples.

One of the World’s Greatest Art Collections Hides Behind This Fence (Switzerland)
(28 May 2016; The New York Times)
The hidden masterpieces of the Geneva Freeport and the major legal and ethical issues related to hiding art.

‘Mindless’ pranksters deface mural of Robert Burns with a Hitler moustache (UK)
(18 May 2016; Express)
Just after the piece was restored, some kids in Ayrshire Hitler’d poor Burns.

EU licences plan ‘could hit London art market’ (UK)
(27 May 2016; Evening Standard)
The market worries about an art import license system that might actually prevent the trafficking of stolen art.

Art, coins and stamps snatched from Sydney property (Australia)
(28 May 2016; The Daily Telegraph)
Oil painting from Spain and South America plus stamp and coin collections taken.

Smithsonian returns Maori remains to New Zealand (New Zealand, USA)
(28 May 2016; CNN)
A homecoming for those who had been gone far too long.

China hopes to reunite “stolen” Buddhist relics in the virtual world (China)
(24 May 2016; The Hindu)
Digitising treasures that were taken to the west in the past for virtual ‘return’.

Stolen artefacts recovered, date back to Mughal era (India)
(23 May 2016; The Times of India)
A surprising amount of info about the smuggling practices of Anurag Tiwari of Himalaya Export.

Kuvempu Prathisthana seeks replica of stolen medal (India)
(24 May 2016; The Hindu)
The poet’s medal was stolen in November 2015 and the prathisthana would like a replacement that they are willing to pay for.

Woman arrested for damaging idols in temple (India)
(26 May 2016; The Times of India)
The woman was allegedly mad at the deities because her bother had been named in a theft case.

Silver crowns of deities stolen from Jatashankar Devalaya in Telangkhedi (India)
(27 May 2016; Nagpur Today)
The silver crowns of five deities were taken, the iron rods of the main gate were bent and broken.

Priceless antiques missing from Peshawar museum: confrontation between ACE and Directorate of Archaeology (Pakistan)
(25 May 2016; Daily Times)
Controversy over a report into missing artefacts. Finger pointing all around.

National plan to save Dead Sea Scrolls from thieves (Israel)
(25 May 2016; Arutz Sheva)
Theft prevention specialists and hundreds of volunteers are heading to the Judean Desert caves

Kids Smash Art at Glass Museum While Adults Stand by Filming (China)
(23 May 2016; Hyperallergic)
The museum has put a video of the incident on a screen next to the artwork. Public shame?

Archaeology Dept. ramps up security at Qutub Shahi Tombs, in the wake of Sandal Wood theft (India)
(29 May 2016; The Siasat Daily)
Application for funding to deploy Special Protection Force personnel at the site.

Guccifer, Who Revealed George W. Bush’s Secret Life as a Painter, Pleads Guilty to Hacking (USA)
(25 May 2016; ArtNet News)
He has pleaded guilty to identity theft and unauthorised access to protected computers.