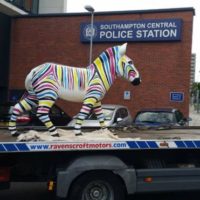 Hot this week: Coming to you on location (and a little late) from DC.

The Last Painting of Sara de Vos by Dominic Smith
(20 May 2016)
A female Dutch Golden Age painter, a 1950s art forgery and theft, what I want in a weekend read art crime novel.

When Cultural Heritage Is Caught in the Cross Hairs
(18 May 2016; The New York Times)
Vignettes of political use of heritage sites.

Lust for Loot: Collecting Is Driving the Demand for Plunder
(19 May 2016; National Geographic)
Collectors are the real looters; demand causes supply.

Egypt Repatriates 44 Stolen Archaeological Objects from France (Egypt, France)
(17 May 2016; Egyptian Streets)
After six years of negotiation. They were seized at CDG in 2010.

After 4 years, rare sarcophagi smuggled into Israel to be returned to Egypt (Egypt, Israel)
(18 May 2016; The Times of Israel)
The two sarcophagus lids were stolen and trafficked following the 2011 revolution.

Another Milestone As France Returns 2 Nok Artefacts (Nigeria, Togo, France)
(20 May 2016; Leadership)
The two pieces were discovered in cargo coming from Togo, stopping in France, and heading to the United States.

Cuban suspected of major art theft to be extradited (Cuba, Greece)
(18 May 2016; eKathimerini)
The Cuban national was arrested in Greece and is accused of stealing 71 items from the National Museum of Fine Arts in Havana.

Ante robos, INAH y Arquidiócesis de Xalapa elaboran catálogo de bienes religiosos (After robberies, INAH and Archdiocese of Xalapa prepare an inventory of religious art; Mexico)
(16 May 2016; El Democata)
This following a lack of awareness of the value of these pieces and several thefts.

Robo arqueológico se dispara en el país (Archaeological theft on the rise in the country; Mexico)
(16 May 2016; El Diario)
Complete with an chart: 2009 was a bad year.

Charity Whose Leader Was Attacked With Lye Closes (USA)
(11 May 2016; The New York Times)
During investigation into what turned out to be a $750k embezzlement scheme at the Healing Arts Initiative, the director was attacked.

Sword stolen from Tippecanoe Co. Courthouse statue (USA)
(13 May 2016; JCOnline)
The sword was taken from the Lafayette sculpture.

Lost and found: The twisted tale of Hobcaw Barony’s stolen art (USA)
(16 May 2016; The Post and Courier)
Stolen in 2003: “The auction house had received the art from “a hoarder” in Columbia who had recently died.”

Newly-Revealed Documents Show Sotheby’s Contacted Helly Nahmad About Modigliani Claim (USA, Switzerland)
(16 May 2016; ArtNet News)
Even though the dealers claim the painting, subject to a claim from a Jewish heir, isn’t owned by them, Sotheby’s sure acted like it was.

Art thief sentenced in ‘Afghan Girl’ heist (USA)
(17 May 2016; The Durango Herald)
The manager of the studio pled guilty to stealing the famous print.

Tracking down Warhol’s stolen ‘Campbell’s Soup’ prints (USA)
(18 May 2016; Marketplace)
More on the theft from the Springfield Art Museum.

Malden man arrested in connection to stolen museum artifacts (USA)
(19 May 2016; KFVS12)
The pieces were stolen from the Malden Historical Museum

Police search for man who stole religious icon from Manhattan church (USA)
(15 May 2016; ABC 7)
He crossed himself while taking the icon.

Cops nab man accused of stealing church painting (USA)
(18 May 2016; New York Post)
The man was also arrested in 1992 for stealing a religious book from a Manhattan church

Diver fined for shipwreck plunder (Finland)
(20 May 2016; YLE)
The diver claimed he didn’t know that the wreck was old.

Berlin’s lost Renaissance sculptures rediscovered in the Pushkin Museum (Russia, Germany)
(19 May 2016; The Art Newspaper)
59 Italian Renaissance pieces have been missing from Berlin’s collections since WWII

Dissident Artist Pyotr Pavlensky Found Guilty by Moscow Court (Russia)
(19 May 2016; ArtNet News)
Pavlensky was found guilty but was not given a prison sentence for a tyre fire on a bridge, but he still faces further vandalism charges.

Los ladrones roban y provocan serios daños en el santuario de la Carballeda, en Rionegro (Thieves steal from and cause serious damage to the sanctuary of Carballeda in Rionegro; Spain)
(16 May 2016; La Opinión de Zamora)
Something serious is happening in Spain when it comes to church theft. Also robbed that night were churches in Camarzana, Pumarejo and Junquera de Tera.

Más de medio centenar de templos, asaltados desde el mes de marzo (More than 50 churches attacked since the month of March; Spain)
(18 May 2016; La Opinión de Zamora)
With a useful and terrifying map of over 50 church thefts in the province in the past year alone.

Police launch appeal after church silver worth more than £3,000 stolen from Cambridgeshire village (UK)
(16 May 2016; Cambridge News)
The pieces were taken from St Catherine’s Church in Litlington

‘Fat woman’ who repeatedly hit herself on the head helped steal paintings worth more than £1,000 (UK)
(16 May 2016; Nottingham Post)
Step 1: cause a distraction…

Stolen Chalice Remains Missing (UK)
(19 May 2016; Hereford Times)
The piece was taken from St Faith’s in Dorstone ten years ago.

Seven arrested after violent £2.7m art and jewellery heist at Bulmer family’s Somerset home (UK)
(20 May 2016; Bristol Post)
15 well known paintings were taken and the house sitter was tied up and left in the 2009 robbery.

Ukraine’s first printed book stolen from library (Ukraine)
(16 May 2016; Ukraine Today)
“The Apostle” was printed in 1574 and has disappeared from the rare book room of the national library.

PM Groysman orders audit of cultural artefacts after theft of incunabula (Ukraine)
(18 May 2016; Ukrinform)
With the theft of the country’s oldest printed books, they are not taking stock of everything.

Maori skull on its way back home after 130 years (New Zealand, UK)
(18 May 2016; The National)
Representatives from Te Papa retrieved the Maori head from the Falconer Museum in Scotland.

Special delegation visits Sheffield for skull repatriation (New Zealand, UK)
(20 May 2016; The Star)
The representatives from Te Papa have now stopped at the Weston Park Museum for formal return of another Maori head.

Buddha relics to head back to Oudong Mountain (Cambodia)
(20 May 2016; Phnom Penh Post)
The gold urn which is thought to contain the ashes of the Buddha was stolen in 2013 and has now been returned.

China Will Publicly Shame Vandals Who Tag Mount Everest Base Camp (China, Tibet)
(16 May 2016; Hyperallergic)
An interesting anti-vandalism tactic. There have been some major Chinese heritage vandalism shames in recent memory.

Christie’s auctions cardiologist Dr. Lahiri’s artworks for $2,376,500 (India)
(18 May 2016; The Economic Times)
And several of the pieces were definitively shown to have been looted and trafficked and were seized.

Theft of Qur’an with Aurangzeb seal in 2003: HC seeks case records (India)
(21 May 2016; Greater Kashmir)
The pieces were stolen from the Sri Pratap Singh Museum in 2003.

NU authorities blame Kumar for delay in missing coins probe (India)
(21 May 2016; The Times of Israel)
The Uni has not blamed the divisional commissioner for nothing happening in the missing coin case for 2 years.

How Christie’s helped to return a looted treasure to Afghanistan (Afghanistan, UK)
(20 May 2016; Christie’s)
A feel good story where an auction house seemingly returned a looted artefact without threat of seizure or lawsuit.

In new crackdown, antiquities authorities tighten noose around dealers, thieves (Israel)
(16 May 2016; The Times of Israel)
Will a digital database ‘close the loopholes’ that dealers exploit?

Palestinian Museum Prepares to Open, Minus Exhibits (Palestine)
(16 May 2016; The New York Times)
An open, but empty museum.

While the world watches Palmyra, another of Syria’s heritage sites risks destruction (Syria)
(20 May 2016; Apollo)
“Deflected attention from what is happening to the rest of Syria’s remarkable Classical, Byzantine, Islamic medieval and Ottoman remains”

Looting rife, heritage sites destroyed: The state of Syria’s history (Syria)
(20 May 2016; Middle East Eye)
Including assertions that looting occurred/is occurring under everyone, not just ISIS.

Red list prepared for Syrian artifacts (Syria, Turkey)
(20 May 2016; Hurriyet Daily News)
The ICOM Red List for Syria has been translated into Turkish.

Steal This Fork: An Artist Spent 15 Years Stealing Silverware Used by the 1% (Australia)
(16 May 2016; The Creator’s Project)
The work of Van T. Rudd: small thefts following meals at the 5 star hotel he worked at.

Iran Arrests Eight Models for Posting “Un-Islamic” Photos on Instagram (Iran)
(18 May 2016; Hyperallergic)
The photos are mostly selfies without headscarves.

Uncharted 4: is the looter-adventurer character a type of cultural appropriation? (Other)
(16 May 2016; The Guardian)
There is actually very good academic work being done on this topic which sadly isn’t cited in this piece.

‘Audacious’ theft of £35,000 of jewellery from Mount Stewart (UK)
(19 May 2016; News Letter)
The jewellery was stolen from the private residence in the stately home.

Protesters Disrupt a BP-Sponsored Exhibition at the British Museum (UK)
(18 May 2016; Hyperallergic)
Actions by the art activist group BP or not BP?

Legal battle between graffiti artist and fashion label back on (USA)
(17 May 2016; The Art Newspaper)
The settlement between designer Moschino and and graffiti artist Rime over Katy Perry’s dress has fallen apart.

Urban Outfitters Wins Partial Victory Over Navajo Nation in Trademark Dispute (USA)
(20 May 2016; Hyperallergic)
The Court thinks “Navajo” is not “famous” enough as a trademark.