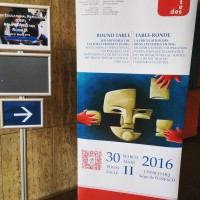 Trade-heavy and academic-light, but useful talks on the state of illicit antiquities play globally 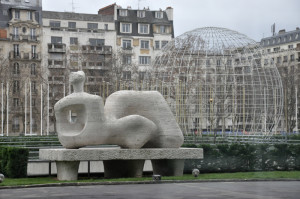 Reclining Figure by Henry Moore, bought by UNESCO in 1958. Look at that internationalist modernity!

Read the official summation of the round table here: Stepping up stakeholders’ involvement in the fight against trafficking of culture

This event represented my very first time physically inside the UNESCO Headquarters at 7 Place de Fontenory, Paris. It is a beautiful, brutal beast, built in the late 1950s. The kind of construction that now horrifies most people, but fills me with a sense of delight. This is the kind of building that one SHOULD attend intergovernmental meetings in. Furthermore, because the place was decorated in the late 1950s as well, it’s packed with surprise Miros, Moores, Picassos, Giacomettis, and Le Corbusiers. The place smacks of the modern internationalist ideal of the period. Which, of course, looks not even idealistic now, just old. I like old.

I was invited to this round table as an attendant, not as a discussant which on its face was fine by me. However, as the day wore on and as more and more people spoke, it became extremely clear that a whole group of very important stakeholders were nearly absent from the discussion: academics and researchers. 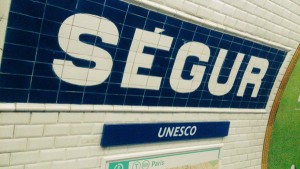 UNESCO Metro stop at 5:30am. Less lonely than expected!

With the exception of an introductory presentation by Dr Sam Hardy which was very unfortunately cut short (you can read his remarks here), nearly no one else out of a long list of speakers was an academic which meant there was a massive information gap. Although top researchers in the field, stellar academics with a lot of information to share and the ability to back their assertions up, were sitting in the audience, they were not very effectively incorporated into the conversation. To put it another way, there were a lot of people who ‘told it like it is’, using the prestigious platform for their own purposes with very little in the way of evidence to back up their claims, while experts with verifiable research results sat nearby unable to challenge, provoke, or contribute. Hands were raised. No one called.

But this is a bit unfair because some really interesting bits of info came out of this round table. It was worthwhile! Also well organized, smooth, on time, and properly moderated. I respect solid moderation. 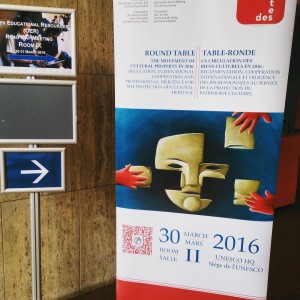 Are they putting the mask together or stealing bits of it! I suspect it is meant to be the former but it sure feels like the latter at an antiquities smuggling round table.

I believe that the original goal of this round table was to have an antiquities trade focused event, to mostly bring market actors together to talk literally around a round table. From there it grew into a much bigger to-do. This probably accounts for the apparently over-representation of the trade and under-representation of non-trade stakeholders. I don’t think they meant to exclude researchers, rather this just grew into something a bit lop-sided. The issue, though, with trade-focused events is that the trade pretty much always says the same thing. I feel that at this point I can write the Sotheby’s and Christie’s lawyers’ talks for them; they present the same lawyerly sanitized gloss without offering any data at all. Dealers association folks tend to come out swinging, imagining they need to beat back the horrible hordes who criminalise their livelihoods. They also say the same thing every time with no data or research. If you get a collector on a panel he (it’s always a he) tells you his own perception of how the world works which, again, is based on nothing but his feelings and can’t be applied to anyone else.

For an academic who is used to requiring and providing a certain degree of solid-evidence foundation for whatever is being asserted, such talks are excruciating. Explosions of “but you have no proof!”, “that’s a lie!”, and “that’s just, like, your opinion man!” rip through your brain until you’re left with a quiet desperation for the pint you know will come as soon as this is over…to be shared with spectacular colleagues who feel the same way.

So this UNESCO round table was a bit of that peppering some really quite interesting talks from regulatory and heritage/museum professionals. 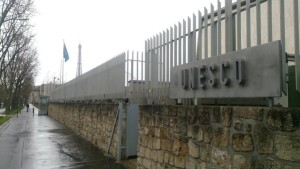 Not quite April in Paris. UNESCO, a soggy UN flag, Eiffel Tower. Whatever, I was having a good time.

And those were really quite good!

That stuff there is cool stuff. I am glad I was in the room for that. Did I write it down in my notebook? I sure did. 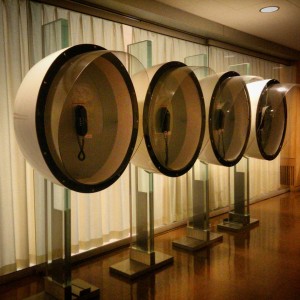 I think these phones at UNESCO still work. Wow. Modernist antiquities, right there.

Plus I missed what was, I am told, the most infuriating and least grounded antiquities trade talk of the round table. I was outside talking to United Nations Radio (Listen here: Protection of antiquities is a global issue), safe and secure from the brain explosions next to a Libyan mosaic and some crazy past futuristic bubble phones.

Admittedly, I am holding the trade representatives to an unrealistic standard. Their job isn’t to satisfy serious NGO and intergovernmental sorts with their research and speaking prowess. It certainly isn’t their job to satisfy the research needs of this academic grump here. I think they would have done more with an informal round table where, arguably, they would have been able to speak more openly, extensively, and productively about their business, experiences, views, and ideas; it wouldn’t put them on the spot. It would be more “we want to learn from you” rather than “explain yourself”. That must be a horribly hostile feeling, even without us grumbly academics rattling our research papers at them (which, of course, didn’t happen).

Maybe there needs to be a round table sub-round table of them in a smaller room with a video feed. I’d watch that. It would be helpful. Helpful not just because I would sociologize the heck out of everything they said…

Moving back to the UNESCO round table, on a whole I think this was a productive way to spend the day. I got quite a bit out of it. At the very least, events like this are a public way to show that this issue matters: that heritage is an important part of identity, the grounding for our communities, beliefs, and selves. Threats to heritage, then, should be the subject of discussion at the highest level. UNESCO is able to provide a venue of the correct altitude. I’m happy to have been invited.