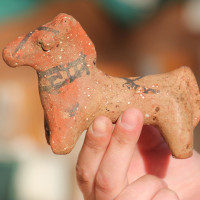 When Is It Okay To Dig Up The Dead?
(7 April 2016; National Geographic)
Always? Never? Does archaeology cross the line into looting or desecration?

How offshore firm helped billionaire change the art world for ever
(7 April 2016; The Guardian)
This is everything we expected out of the art market.

Saquean y olvidan Zona Arqueológica (Archaeological site looted and forgotten; Mexico)
(6 April 2016; Diario de Poza Rica)
The site at El Águila in Tihuatlán has been looted and is not being protected.

Mossack Fonseca’s role in fight over painting stolen by Nazis (New York, Panama)
(7 April 2016; The Guardian)
Remember that Modigliani that the Helly Nahmad Gallery claimed not to own? They own it.

Peru archaeological pieces to be repatriated from Chile (Peru, Chile)
(5 April 2016; Peru This Week)
The 75 seized pieces from “the Villalobos Collection” are being transported back by Peru’s air force.

Jute-Sack Case Heats Up: Ibrahim Mahama Countersues Simchowitz, Ellis King (USA)
(31 March 2016; ArtNews)
“The countersuit alleges that Simchowitz and Ellis King broke a contract with the artist that stipulated they would not alter works they purchased from him and sell them”

Man spent $44.5K on Confederate jacket; New Orleans museum says it was stolen (USA)
(4 April 2016; The Times-Picayune)
The Confederate Memorial Hall Museum says the jacket was stolen before 1990; a man from Alabama bought it and now may just donate it back.

$90,000 Hindu Statue Stolen From UES Gallery During Open House (USA)
(5 April 2016; Gothamist)
Wow. The piece was stolen from Nancy Weiner Gallery, you know…the gallery that had looted antiquities seized from in March.

The Norton Simon Museum’s Multi-Million-Dollar Nazi Restitution Case of Two Paintings by Cranach the Elder, Explained (USA)
(5 April 2016; Artsy)
A great overview of not just this particular case, but a lot of the legal issues involved in restitution of art.

Documentary Examines US Soldier Who Stole Priceless Art (USA, Germany)
(6 April 2016; Voice of America)
‘”The Liberators,” is the story of a U.S. soldier who stole priceless art from a site in Germany and kept it with him in Texas until he died 35 years later.’

Pieces of Chihuly statue in Greenville park reported stolen (USA)
(8 April 2016; The State)
Security cameras face the statues at all times and police have requested the footage.

Bulgaria’s Customs Capture Nearly 700 Archaeological Artifacts, Coins at Sofia Airport (Bulgaria)
(31 March 2016; Archaeology in Bulgaria)
This was in a parcel that was inspected at Sofia International Airport.

Brass Foundry Is Closing, but Debate Over Degas’s Work Goes On (France)
(4 April 2016; The New York Times)
Valsuani is being liquidated to pay creditors; the question still remains, are they making “real” Degases?

Does My Family Own a Painting Looted by Nazis? (Germany, Netherlands)
(5 April 2016; New York Times)
‘…a “red flag name” that signals “toxic provenance”‘. But who was it taken from? Was it taken from anyone?

Arrests made over 2009 Edvard Munch heist from Oslo art dealer (Norway)
(6 April 2016; The Scotsman)
The lithograph was taken from Nyborgs Kunst art gallery in Oslo.

Stolen Edvard Munch artwork recovered after seven years (Norway)
(6 April 2016; The Guardian)
Two men have been arrested for the theft of ‘Historien’

Historian Adrian Greenwood found murdered at his home (UK)
(9 April 2016; The Guardian)
The rare book and art dealer was brutally killed in the hallway of his home.

‘Rathkeale Rovers’ gang members jailed over multi-million euro rhino horn spree (UK)
(4 April 2016; The Independent)
They all got sentences of over 4 years.

Inside the Ballsy Irish Traveller Gang That Stole Millions of Pounds Worth of Rhino Horn (UK, Ireland)
(5 April 2016; Vice)
A long read on the so-called Rathkeale Rovers.

2 swords stolen from Rabindranath’s Kuthibari (Bangladesh)
(3 April 2016; Prothom Alo)
Negligence on the part of the country home’s security is being blamed for this theft from the poet’s residence.

Astadhatu idol of Lord Ganesh worth 25 crore recovered in Kaushambi, 6 held (India)
(4 April 2016; The Times of India)
The group is called an inter-state gang who were arrested while plotting to escape to Mumbai with the idol.

గురజాల రామాలయంలో చోరీ (Theft in Rama Temple of Gurajala; India)
(4 April 2016; Sakshi Post)
The theft was discovered when the temple was open for morning prayers.

Dolls theft: Cops clueless even after 40 days (India)
(5 April 2016; The Times of India)
Over 800 dolls went missing from the Rotary Dolls Museum in Rajkot.

प्राचीन भद्रेश्वर मंदिर से घंटे चोरी (Bell stolen from Ancient Bhadreswar temple; India)
(5 April 2016; Amar Ujala)
The bell was stolen from a Shiva temple that is in the custody of the Department of Archaeology

Ashtadhatu idols stolen in UP (India)
(7 April 2016; Business Standard)
They were taken from a temple in Chaurava village.

HR & CE official arrested for theft of precious temple jewels (India)
(8 April 2016; The Hindu)
The jewels from Sri Oppiliappan Temple in Thirunageswaram, Kumbakonam were replaced with fake ones.

NU to constitute panel to probe missing coins (India)
(7 April 2016; The Times of India)
“Since whereabouts of the old enquiry report is still not known, we’ve decided to set up a panel only for unravelling the mystery behind missing coins.”

6 more coins from Vakataka era missing from NU dept (India)
(9 April 2016; The Times of India)
Another six coins of the same era as the other 214 missing coins are also missing from the University.

Private collectors fuel demand for looted Mideast antiquities (General)
(7 April 2016; Al Monitor)
Notes from a recent event at the Woodrow Wilson International Center for Scholars with quotes from a number of experts.

Is the Israel Museum’s Birds’ Head Haggadah Nazi-era loot? (Israel)
(6 April 2016; The Art Newspaper)
Heirs of the German-Jewish politician Ludwig Marum are pushing to have the Haggadah restituted.

Smuggler of Stolen Artifacts From Palmyra Speaks Out About ISIS’ Illicit Operation (Syria, Turkey)
(6 April 2016; NBC News)
Very little in the way of anything verifiable; no names; no good photo of the object.

Islamic State nets up to $200 million a year from antiquities: Russia (Syria, Russia)
(6 April 2016; Reuters)
No. They don’t. But it behooves Russia to say so.

Turkey ‘probing Russia claims on antiques’ (Syria, Russia, Turkey)
(8 April 2016; Press TV)
“Even though the claims in the Russian media and recently brought to the UN by the Russian authorities have been made for political purposes and as propaganda, they are being seriously investigated,” a Foreign Ministry official said.

Historic castle destroyed by sea and treasure hunters in Turkey’s west (Turkey)
(4 April 2016; Hurriyet Daily News)
The castle in the province of Edirne’s Yayla village was registered for preservation in 2012 and has since been hit by illegal digging; there are no guards on site.

ICE returns dinosaur skeletons, eggs to Mongolia (Mongolia, USA)
(5 April 2016; ICE)
“The fossils were recovered by HSI as a result of investigations in Wyoming and New York”

Nightlife guru takes to Instagram to report stolen art (USA)
(3 April 2016; Page Six)
A large photo of Madonna was taken from Susanne Bartsch’s partner’s new gym. She shamed it back on Instagram.

Columbus family sues after Air Force museum security holds them at gunpoint (USA)
(4 April 2016; Cleveland.com)
While their children cried and in public. Museum security misidentified the family’s car as a stolen car.

Guards hop to it: Huge rabbit artwork gets 24/7 security (USA)
(6 April 2016; KEPRTV)
The giant bunnies on display in San Francisco will be guarded at all times due to vandalism fears.

Chris Brown Accused Of Stealing Graffiti Artist’s Tag, Artist Sues Him (USA)
(7 April 2016; Design and Trend)
“Graffiti artist Konfused is suing Brown for the use of a similar Konfuzed tag”