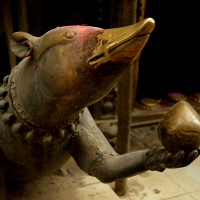 Hot this week: Thinking of Nepal on the one year anniversary of the earthquake.

The rise of fakes and false attributions in the art world
(19 April 2016; Tehelka)
This is only included as a name and shame. Hilariously, this article is plagarised. Seriously. Here is intellectual property attorney Leila Amineddoleh talking about having her work stolen in a piece about false attributions.

Egypt retrieves ancient statue from Belgium (Egypt, Belgium)
(24 April 2016; State Information Service)
Not much info; return was “a request by the Egyptian judiciary after it was proven that the statue was smuggled from Egypt”.

Guilty of destroying ancient Maya site, Noh Mul! (Belize)
(19 April 2016; Amandala)
Almost three years after the destruction of the Maya site for road construction fill, there have been convictions

Robo de la Virgen del Carmen causa repudio en 2001 (Theft of the Virgin of Carmen caused repudiation in 2001; Guatemala)
(19 April 2016; Prensa Libre)
The shocking theft and then shocking return of the image from the Hermitage of Cerro del Carmen in Guatemala City

Impune, el saqueo de zonas arqueológicas de Michoacán (The archaeological sites of Michoacán looted with impunity; Mexico)
(18 April 2016; Cambio de Michoacán)
A call upon the INAH to do more to protect the area.

Saquean Cerro del Muerto (Mexico)
(23 April 2016; AM)
The expert who inspected the site said it was destroyed by treasure hunters who wouldn’t have found anything sellable anyway.

Couple Sought in Alleged Art Theft from 26 Degree Brewing (Video) (USA)
(18 April 2016; New Times)
Three minutes before security started their shift, a couple stole art from the walls of this Florida brewery… and left their credit card behind.

Should the FBI Offer Reward Money for Stolen Art? (USA)
(20 April 2016; Law Street Media)
A rather facile argument that argues that reward money for lost art is better spent on reward money for, you know, real crime…

Picasso piece tangled in tug-of-war between dealer, billionaire (USA)
(20 April 2016; Miami Herald)
The Tisch family says that the Portrait De Marie-Therese was stolen from 88-year-old Billie Tisch’s home in 2009 but they only noticed it gone now.

Los Angeles Art Dealer Is Arrested on Embezzlement Charges (USA)
(22 April 2016; The New York Times)
Perry Rubenstein’s gallery had already filed for bankruptcy, but the charges relate to failing to turn over entire profits from sales.

Painting looted by Nazis coming to auction in NYC (USA)
(23 April 2016; The Times of Israel)
The piece was owned by the Rothschilds and wasn’t returned to them until 1998.

Former director of scandal-beset Knoedler Gallery breaks her silence (USA)
(18 April 2016; The Art Newspaper)
“There has been a lot of misunderstanding”. Ann Freedman’s version of events.

Former Knoedler Director Ann Freedman Says She Was the ‘Perfect Mark’ (USA)
(18 April 2016; ArtNet News)
Where she asserts she was the real victim here, it isn’t her fault, she wasn’t an art expert anyway, and she is sorry.

France Lost Track of 23,000 State-Owned Artworks and Historic Objects (France)
(21 April 2016; Hyperallergic)
Some likely stolen, some just lost, but the numbers are a bit humbling.

11 Picasso Works Stolen from German Bank’s Collection (Germany)
(18 April 2016; ArtNet News)
The pieces were stolen from Portigon AG back in winter of 2014 but it is just being reported now.

Italy Recovers 3 Paintings Seized During World War II (Italy, Luxembourg)
(18 April 2016; ABC News)
The pieces were taken from the Borbone-Parma family and were traced to Milan; they are in state custody because no living descendants could be traced.

Odd Nerdrum, Awaiting Jail Time for Tax Fraud, Barred From Leaving Norway (Norway)
(22 April 2016; ArtNet News)
A strange case. Nerdrum’s art melted and he provided replacements to buyers but Norway taxed him for both the originals and replacements.

A Documentary About the Artist Who Stole Banksy’s Work Out of Spite (UK)
(22 April 2016; Hyperallergic)
A review of the film “The Banksy Job”

Palmyra’s Arch of Triumph recreated in London (UK, Syria)
(19 April 2016; BBC News)
Made from Egyptian marble by the Institute of Digital Archaeology based on photos of the original.

How do you buy Indigenous Australian art ethically? (Australia)
(18 April 2016; The Guardian)
The fine line between patronage and exploitation.

Save cultural heritage of India (India)
(18 April 2016; Daily Excelsior)
Reflecting on heritage theft due to negligence and the movement of artefacts to the international market.

Now, NU unearths 15 Mughal era coins in museum (India)
(21 April 2016; The Times of India)
The story has taken a twist: 15 coins were found at Nagpur Uni but they aren’t any of the ones that are missing and are not in museum records.

Monuments Men go after state’s treasure (India)
(24 April 2016; Bangalore Mirror)
A feature on the work of the India Pride Project.

Kohinoor Diamond Belongs To Britain, Says Government In Supreme Court (India, UK)
(18 April 2016; NDTV)
“India should not try to reclaim the famous Kohinoor diamond as it was neither stolen nor forcibly taken, the government said today.”

In a U-turn Narendra Modi government promises to take all steps to bring back Kohinoor (India, UK)
(20 April 2016; The Economic Times)
Maybe the government DOES want to push for the return of the Kohinoor after all.

‘The Kohinoor is but one flashy stone’ (India, UK)
(22 April 2016; The Hindu)
Professor Naman Ahuja discusses the return debate

Jewish family makes claims to prized Passover manuscript (Israel)
(21 April 2016; The Daily Mail)
A complicated case for the Bird’s Head Haggadah which is the ‘jewel of Israel’s top museum’ and was likely looted by the Nazis.

Ordinary Syrians are Risking Their Lives to Protect Their Cultural Heritage (Syria)
(23 April 2016; The Wire)
Dr Emma Cunliffe reflects on the sacrifices made by Syrians to protect heritage.

Montreal art gallery displays paintings ‘stolen’ from the Internet (Canada)
(19 April 2016; The Globe and Mail)
Paul Lavoie plays with the idea of ‘stolen’ for this exhibition.

Theft of teak trees of temple near Nellore: teams formed to nab accused (India)
(19 April 2016; The Hindu)
It seems that temple staff gave the accused a false certificate of permission to take the valuable trees.

The Donald Threatens to Sue Artist Over Her Trump Micropenis Portrait (USA)
(20 April 2016; Hyperallergic)
The legal threat against Illma Gore came from “someone claiming to be from Trump’s camp”.