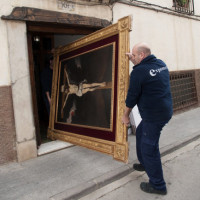 Hot this week: Major bust of ancient Indian loot at Christie’s. When will auction houses learn to conduct basic checks?

Keeping it real in the art world
(11 March 2016; Financial Times)
On what is lost to art forgery.

Returning the hatchet: Governments are starting to return treasures to their neighbours
(12 March 2016; The Economist)
On the return of objects to Latin America from Latin America with quotes from me.

Buried Souls: How Ontario bulldozed through a rare Huron-Wendat burial site in Barrie (Canada)
(9 March 2016; APTN)
A sad case to read, the result of a whistleblower who approached Archaeological Services Inc.

The Dream of Treasure Keeps Paraguayans Digging (Paraguay)
(10 March 2016; The New York Times)
A fable of lost treasure and destruction.

Profanan funerario de Centro Arqueológico de Qotakalli a plena luz del día (Cemetery of the archaeological site of Qotakalli looted in broad daylight; Peru)
(12 March 2016; La Republica)
Neighbours say the area is filled with gangs and drugs; the looters seemed to have been looking for ceramics and have not been arrested.

How Many Human Skeletons Are in U.S. Museums? (USA)
(6 March 2016; History News Network)
And how did they get there? Dubious means.

Van Gogh Legal Battle – From Soviet Union to Supreme Court (USA, Russia)
(7 March 2016; The Moscow Times)
Will The Night Café go to the US Supreme Court?

Kodiak Ancestral Remains to Return Home (USA)
(8 March 2016; KNBA)
The remains were taken by archaeologists in the 1960s and are now coming back from Indiana University Bloomington.

One mystery leads to another (USA)
(12 March 2016; The San Diego Union-Tribune)
The original of “Nativity with St. Francis and St. Laurence” was stolen in 1969, this copy is missing after it was sent to replace the original.

Feds Looking Into Maligned Swiss Art Dealer: Report (USA)
(3 March 2016; Observer)
Not much in the way of details about what aspect of Bouvier the Feds might be looking into.

The Da Vinci Markup? Europe’s Art Scandal Comes to America (USA)
(9 March 2016; Bloomberg)
Are federal prosecutors in the US looking into Yves Bouvier?

ICE recovers stolen Indian artifacts from major auction house ahead of Asia Week New York (USA, India)
(11 March 2016; ICE)
Yet again, Christie’s is caught selling loot, this time from the Lahiri Collection which “had come from a specific smuggler and supplier of illicit cultural property in India”.

Federal Agents Raid Christie’s, Seizing 2 Ancient Sculptures (USA, India)
(11 March 2016; The New York Times)
Christie’s claims it had not way to know the pieces came via Subhash Kapoor, which is a silly thing to say. If you don’t know where it came from, you don’t sell it.

Medieval Reliquary Discovered at Christian Monastery Looted by Treasure Hunters ahead of Archaeological Excavations (Bulgaria)
(7 March 2016; Archaeology in Bulgaria)
Fresh looters pits discovered at a monastic site near the town of Dobromirtsi only shortly before archaeological excavations are set to begin there.

UNESCO and French and Swiss heritage professionals stand up for the safeguarding of Syrian heritage (France, Switzerland, Syria)
(10 March 2016; UNESCO)
An initiative to give supplies to professionals in Syria.

‘The toilets were absolutely full of crucifixes’: Two elderly people arrested over theft of religious items (France)
(6 March 2016; The Journal)
The two seniors seem to have had complex motivations for their church theft spree.

Elderly pair held after 3,000 French church objects found (France)
(7 March 2016; Expatica)
It seems as if this octogenarian and a woman in her 60s stole the items over the course of recent months, taking them from a number of churches every few weeks.

Picasso’s dealer Paul Rosenberg celebrated in show based on granddaughter’s book (France)
(9 March 2016; The Art Newspaper)
Rosenberg lost much of his collection to Nazi persecution

Covert scan of museum’s Nefertiti bust appears to be hoax (Germany, Egypt)
(8 March 2016; BoingBoing)
Sure if they museums shared their scans we wouldn’t be in this situation, but this now isn’t a covert liberation methods, it’s boring old theft.

Nefertiti 3-D Scanning Project in Germany Raises Doubts (Germany, Egypt)
(10 March 2016; The New York Times)
The story isn’t what it purports to be.

The fall of Nelson’s Column 50 years on (Ireland)
(7 March 2016; Irish Examiner)
Attacks on Nelson’s pillar in Dublin. Politics and symbolism.

The man who blew up Nelson (Ireland)
(12 March 2016; {BBC News})
The Irish republican who blew up the statue of Nelson in Dublin is now 83 and has no regrets.

Stolen artworks and archaeological artifacts seized as Bullas resident is arrested (Spain)
(9 March 2016; Murcia Today)
The home of the well-known collector contained over 6k ‘objects of interest’ to the Guardia Civil.

From the Elgin marbles to the Cambridge cockerel, it’s time to return stolen goods (UK)
(7 March 2016; The Guardian)
The case for return: pro cultural identity.

Tracing the Legacies of Postwar UK’s Lost and Damaged Public Artworks (UK)
(7 March 2016; Hyperallergic)
Much of it lost, lots of photos here and on exhibit in London.

World War I message that told troops conflict was over is stolen (UK)
(10 March 2016; The Independent)
A personal memento, the transcribed message in the hands of a grand daughter was stolen along with WWI medals.

Egyptian ambassador proposes plan to share Sekhemka (UK, Egypt)
(8 March 2016; The Art Newspaper)
“The Egyptian embassy is prepared legally to own the sculpture and lend it for equal periods to the British Museum and the Egyptian Museum in Cairo.”

Egyptian embassy could buy Sekhemka statue and loan it to British Museum (UK, Egypt)
(11 March 2016; Northampton Chronicle & Echo)
Not quite how most people would think Egypt should spend it’s heritage budget.

Benin Bronze “permanently removed” from Jesus hall (UK, Nigeria)
(8 March 2016; The Cambridge Student)
The college council has partially upheld the student’s decision to repatriate the artefact to Nigeria. Unclear if it will really go back.

Repatriation of indigenous artefacts a hot topic for museums (Australia)
(12 March 2016; The Weekend Australian)
The “sense of cultural alienation is undergoing rapid change, on both sides of the Pacific.”

Rescue bid launched for Fonterra-trapped fish (New Zealand)
(8 March 2016; The New Zealand Herald)
The dairy giant is vacating their head office, what about the art inside?

Temple Theft: Role of Migrant Workers in Crime Suspected (India)
(7 March 2016; The New Indian Express)
“Outsiders” are suspected in the theft from the Padavathu Mahadeva temple at Maradu.

Over 100 antiquities stolen from monuments since 2000 (India)
(9 March 2016; Business Standard)
Some official numbers from the police which seem a bit low based on monitoring the press. Perhaps issues with where one draws lines on “antiquity”.

Precious Art Stolen from India Is Being Brought Back. Thanks to One Man and His Extraordinary Team (India)
(9 March 2016; The Better India)
The spectacular work of Anuraag Saxena.

Temple theft case: police custody of main accused extended (India)
(10 March 2016; The Times of India)
The main suspect in the theft at Sri Mookambika temple will be held for four more days.

Museum has a history of theft, missing manuscripts (India)
(9 March 2016; The Hindu)
This isn’t the first time that objects have gone missing from the Odisha State Museum.

Bid to smuggle antiquities foiled, two arrested (Pakistan)
(5 March 2016; Dawn)
More than a dozen Arabic and Persian books were being smuggled from Peshwar to Islamabad.

‘This is living antiquity’: the director of the Hermitage wants to rebuild Palmyra (Syria, Russia)
(7 March 2016; The Art Newspaper)
Mikhail Piotrovsky is thinking Afghanistan, Iraq, Mali and Yemen as well.

Museum of Lost Objects: The Armenian church in Deir al-Zour (Syria)
(10 March 2016; {BBC News})
Has now been ‘destroyed by bombs’.

Antiquities: The Spoils of War (Syria, Iraq)
(11 March 2016; Financial Times)
More scepticism about the absurd figures said to be IS’ antiquities profits. Where were such articles two years ago?

To Fight ISIS, Art Dealers & Archaeologists Join Forces (Syria, Iraq)
(11 March 2016; Vice)
A misleading headline for an article that doesn’t say that. Quotes from my colleagues.

Escalating the War on Looting (Syria, Iraq)
(11 March 2016; The New York Times)
Another article that admits that the evidence for major IS profits via artefact looting is slim to none, but that doesn’t mean that looting isn’t a major issue.

Quarry workers ‘erasing history’ in Antalya with soap, sponge (Turkey)
(12 March 2016; Hurriyet Daily News)
“Stone quarries have been given permission to mine Mount Latmos and workers are trying to erase historical paintings dating back 6,000 years”

This is what happened when Spain restored ancient castle (Spain)
(9 March 2016; The Local)
Tragedy or reality of preservation?

Chimpanzee in top hat and rhino head with fibreglass horn among TV props worth £100,000 stolen from taxidermy warehouse (UK)
(9 March 2016; The Telegraph)
The director of London Taxidermy suspects the thieves were after rhino horn which, of course, had long been removed from the piece.

Man in court after stealing matchstick model of Darlington’s covered market while drunk (UK)
(10 March 2016; The Northern Echo)
“The cardboard box was too small to accommodate the model so he left and returned with a larger cardboard box. He took the model, put it in the box and left.”

Master and Commander coat stolen (USA)
(7 March 2016; The San Diego Reader)
I love that this is from the Harbor Police blotter.

Saratoga man charged with selling art made of elephant ivory (USA)
(9 March 2016; SFGate)
He was selling them in internet transactions and sending them to Australia and New Zealand.