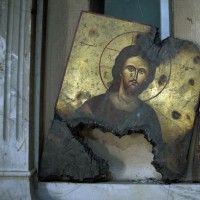 Why art galleries are quietly clearing out their vaults
(28 February 2016; McLean’s)
“Inside the quiet world of deaccessioning”.

Scholarly debate will be stifled after Knoedler
(4 March 2016; The Art Newspaper)
“If you fear that perfectly honest casual remarks may be twisted to bear upon authenticity in a way that they were never intended to, then this alone will tend to silence scholarly discourse and debate.”

CC to Decide If Malian Teacher Will Face Charges for Destroying Timbuktu Artifacts (Mali)
(29 February 2016; Vice)
The trial of Ahmad al-Faqi al-Mahdi and heritage destruction as a human rights issue.

Destruction of Timbuktu sites shocked humanity, prosecutor tells ICC (Mali)
(1 March 2016; The Guardian)
“Prosecutors are seeking to persuade three judges that there is enough evidence to proceed to a trial.”

Timbuktu Shrines Trial: Why the Destruction of Cultural Heritage is History Repeating Itself (Mali)
(5 March 2016; Newsweek)
“The attack on the tombs and shrines of Timbuktu is also a direct attack on cultural identity.”

Moncton’s Assumption Gallery has 2 paintings stolen (Canada)
(1 March 2016; CBC News)
The two pieces had ‘a security chip’ but it is unclear what that means.

N.L. artist upset after painting sent through Canada Post is stolen (Canada)
(4 March 2016; CBC News)
The postcard sized painting was being sent to an exhibition.

The scenes of a crime: Kota Ezawa revisits the Gardner Museum theft (USA)
(1 March 2016; Los Angeles Times)
An exhibition of artwork that explores the lost pieces from this heist.

Sotheby’s halts auction of Detroit mosaics (USA)
(2 March 2016; The Detroit News)
“Pieces of a Detroit building that were set to be auctioned Wednesday morning by the elite Sotheby’s have been pulled from the sale.”

Police recover school’s stolen artwork (USA)
(6 March 2016; Juneau Empire)
A month after the native artworks were stolen police were able to recover them. Charges have not yet be filed against the individuals they were seized from.

Christie’s Seeks Judgment Against Mugrabi Family for $32m Unpaid on Basquiat Painting (USA)
(29 February 2016; Art Market Monitor)
They have paid $5m on the $37m, but no more.

Austria Appeals $9 Million Compensation Verdict in Missing Klimt and Schiele Case (Austria)
(3 March 2016; ArtNet News)
In 1951 a collector consigned the artworks on long term loan to a museum in Linz. The family asked for them back in 2006 but the museum couldn’t produce them.

Long battle rages over Franz West’s estate (Austria)
(4 March 2016; The Art Newspaper)
“Zwirner and Gagosian galleries are embroiled in the feud between the Austrian artist’s archive and foundation.”

The great Art hoax of Zagreb’s Mimara Museum (Croatia)
(3 March 2016; Examiner)
Most of the pieces sold by Ante Topic Mimara to the Yugoslav state were fakes.

French cleaners scrub off street art (France)
(28 February 2016; BBC News)
The piece was commissioned from C215 but no one told the anti-graffiti squad.

French police seize painting attributed to Cranach, owned by the Prince of Liechtenstein (France, Liechtenstein)
(4 March 2016; The Art Newspaper)
How very strange. The Prince, who isn’t selling the piece, thinks it is real. He had just loaned it to an exhibition in France. This one is sure to scare folks.

Egypt struggles to halt sale of artifacts at Dutch auction house (Netherlands, Egypt)
(2 March 2016; The Cairo Post)
The sales at Tefaf in Maastricht are scheduled for March 11–20.

US Returns Stolen Historic Documents to Russia (Russia, USA)
(3 March 2016; ABC News)
They were taken in the chaos following the fall of the Soviet Union.

Looted ancient sculptures found in Slovenia refugee tent (Slovenia)
(3 March 2016; The Straits Times)
Very little information has been provided here so we should not rush to any conclusions. Photos of objects needed.

Swiss under pressure over art that Jews were forced to sell (Switzerland)
(3 March 2016; The Art Newspaper)
Lauder believes that art sold to fund escape should be treated like looted art or forced sale.

Vandals destroy beloved Stirchley Park art mural by painting over Banksy-style images (UK)
(27 February 2016; Birmingham Mail)
“Why would someone do such a thing?”

Manannan Mac Lír statue back in place at Binevenagh (UK)
(29 February 2016; The Irish News)
It was stolen then found more than a year ago. Now the piece by John Sutton is back.

Lost painting found on steps of Cradley Library (UK)
(3 March 2016; Halesowen News)
The piece was taken 2.5 years ago and it appears to have been returned out of remorse.

RETURNED: 30-years after being stolen from Wilberfore Museum, precious Barachin cup is back in Hull (UK)
(2 March 2016; Hull Daily Mail)
The piece was crafted in 1725, stolen in 1986, bought by a collector in 2015 who did his own provenance research on it. When he discovered it was stolen, he returned it to the Hull Museums!

Stolen Abraham Barachin cup returned to Hull after 30 years (UK)
(3 March 2016; BBC News)
“It was identified when an antiques collector took it to an ‘opinions day’ at the Victoria and Albert Museum.”

Rathkeale Rovers: How an enthusiastic gardener and his Leylandii trimmings helped to bring gang leaders to justice (UK)
(29 February 2016; The Independent)
A longer piece on this major conviction.

Museum raids: Cambridge Fitzwilliam unlikely to get jade back, says expert (UK)
(1 March 2016; {BBC News})
Several market experts speculate that if the items have been taken to China, they are not recoverable.

Museums spending too little to prevent artefacts being stolen from their collections, expert warns (UK)
(1 March 2016; The Independent)
Comments from Tom Cremers of Museum Security Network

Gang may have stolen antiquities for Chinese market, says expert (UK, China)
(1 March 2016; The Guardian)
And yours truly is that expert!

A theft in Old Believers’ community in western Ukraine (Ukraine)
(2 March 2016; Ukraine Today)
About 50 icons were taken and found in the home of a local church attendant.

US Museum Returns Stolen Rama Statue (Cambodia, USA)
(29 February 2016; Cambodia Daily)
The director of the national museum said “we still have to work to find the others”.

Cops crack Pimpri temple theft case, 3 in net (India)
(4 March 2016; The Times of India)
A watchman and five accomplices are suspected in this theft of a gold crown, three silver crowns, and various other temple ornaments.

Temple burgled: idol and valuables stolen (India)
(6 March 2016; The Hindu)
“A panchaloha idol and some other valuables from the Asha Pooraha Ganapathy shrine at Ganapathy Nagar”.

In icon centre, Uma Parmeshwari reunites with Nataraja after 8 years (India)
(2 March 2016; Deccan Chronicle)
Some question about some of the facts in this piece.

Rs 1.58 L jewellery theft at Vaishno Devi temple (India)
(1 March 2016; Pune Mirror)
All the gold and silver ornaments of the goddess were taken.

Vaishno devi temple: Security guard, aides held for theft (India)
(4 March 2016; The Indian Express)
A security guard was involved in the theft of a crown, some ornaments, and cash.

Priceless artifacts stolen from cellar of Islamic summit tower in Lahore (Pakistan)
(5 March 2016; Daily Pakistan)
“According to administration the thieves took away gifts given by heads of various Islamic countries including four bangles, two necklaces and two rings.”

Probe into Summit Minar Museum theft begins (Pakistan)
(6 March 2016; The Nation)
“A police officer told reporters that many participants of a rally organised by religious parties against the execution of Mumtaz Qadri stormed the small gallery and took away four antique artificial bracelets.”

Museum of Lost Objects: The Winged Bull of Nineveh (Iraq)
(29 February 2016; BBC News)
The first in a series that looks at the history of individual antiquities that have been destroyed recently.

What do we really know about Islamic State’s role in illicit antiquities trade? (Iraq, Syria)
(1 March 2016; The Art Newspaper)
Very little, says top experts. Most of what is out there is rumour, speculation, and even lies.

Some Take Massive Risks To Save Syria’s Cultural Heritage (Syria)
(28 February 2016; NPR)
Reporter James Harkin discusses his time on the ground in Syria.

Museum of Lost Objects: Tell of Qarqur (Syria)
(2 March 2016; BBC News)
Loss from this site with quotes from Jesse Casana.

Museum of Lost Objects: The Lion of al-Lat (Syria)
(4 March 2016; BBC News)
The lion, another object gone from Palmyra.

But is it art? NYPD cops seize $1m worth of marijuana disguised as art in New York’s West Village (USA)
(28 February 2016; The Daily Mail)
The crate the pot was in was labelled “art”. Sly.

Petrified Forest: Digging out of a rock and hard place (USA)
(3 March 2016; Arizona Sonora News)
On regret of theft and return.

A Plagiarism Scandal Is Unfolding In The Crossword World (USA)
(4 March 2016; Five Thirty Eight)
Corruption and fraud in the most cherished of institutions…crosswords.

Hacker Guccifer who leaked Bush paintings, racy Powell emails to be extradited to US (USA, Romania)
(4 March 2016; New York Post)
Yes, this is the fellow who brought us George W. Bush’s bathtub self portrait.