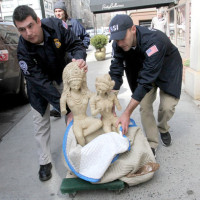 When it comes to ancient treasures, are we owners, thieves or caretakers?
(16 March 2016; Eastern Daily Press)
Same questions, no answers.

Does one ethnic group own its cultural artefacts?
(18 March 2016; Aeon)
“The idea that one culture ‘owns’ a particular heritage is having a profound impact on museums.”

EU Ready to Allocate 7.5 Million Euros for Preservation of Egyptian Heritage Sites (Egypt)
(15 March 2016; Egyptian Streets)
Tied in to German law changes that help the return of antiquities and the possibility of further EU legal amendments.

Why Egypt is placing its pyramids under military protection (Egypt)
(16 March 2016; Al Monitor)
“Egyptian Minister of Antiquities Mamdouh al-Damaty has called on Queen, a national service company affiliated with the armed forces, to develop and renovate the site”

A question of morality (Nigeria)
(20 March 2016; The Nation)
Thoughts on the return of Nigerian cultural objects.

13 Maya Villagers Stand Trial in Belize (Belize)
(14 March 2016; IC Magazine)
For detaining a man who had built on the Maya site of Uxbinka. A complicated case with possible racial issues.

Authorities debunk man’s claim of grave-digging (USA)
(17 March 2016; Herald-Tribune)
A video was posted that purported to be looting of Native American burials; authorities have investigated and found no cause for concern.

Maricopa man who claimed artifacts were stolen gets prison for insurance fraud (USA)
(18 March 2016; AZ Central)
He said that his home was burglarised and Native American artefacts were stolen. They weren’t.

Woman wanted for stealing Buddhist statues from temple (USA)
(17 March 2016; My News LA)
The pieces aren’t ancient but are worth about $1k each. The thief was caught on camera; the same woman had previously vandalised the temple in 2015.

Suspect in Buddhist statue theft arrested in Santa Ana (USA)
(19 March 2016; My News LA)
A quick arrest. No clue as to her motive.

How a promising musician stole a violin worth millions — and got away with it (USA)
(17 March 2016; The Times-Picayune)
The story of Philip Johnson, successful violin thief.

Federal Agents Seize What They Called an Illicit Antiquity Headed for Asia Week (USA, Pakistan)
(15 March 2016; The New York Times)
Another seizure, this time a Gandhara head from Pakistan seized at a port.

Ancient Statue Is Seized From Manhattan Gallery (USA, Afghanistan)
(16 March 2016; The New York Times)
Amazing! The third in less than a week. A spectacular embarrassment for dealers in ancient Asian art.

Were investors conned into buying rare manuscripts? (France)
(15 March 2016; Hugh Schofield)
Around 18k people defrauded by the Museum of Letters and Documents?

Centre Pompidou’s stolen Picasso goes back on show after 15 years (France)
(18 March 2016; The Art Newspaper)
You can see the recovered painting on 24 March and talk to the restoration team.

Paris auction porters go on trial for alleged ‘pilfering’ of thousands of items (France)
(14 March 2016; The Guardian)
A whopping 49 auction house porters are on trial and each could face sentences of up to 7 years for all sorts of theft of art and other objects.

Special squad of Italian art police crack case of Verona museum theft, arrest 13 suspects (Italy)
(17 March 2016; The Washington Post)
“Among them were the security guard, the guard’s twin brother and the guard’s Moldovan wife”. Always look at the guards! (Sorry guards). The paintings? Somewhere in Moldova.

Córdoba rejects Catholic church’s claim to own mosque-cathedral (Spain)
(13 March 2016; The Guardian)
The UNESCO world heritage site is not the property of the Catholic church, so says the city, but does it belong to the city? The local bishop has a history of banning Muslims from praying there.

Francis Bacon Paintings Worth £23m ‘Stolen’ (Spain)
(13 March 2016; Sky News)
The paintings “are believed to have belonged to a friend of Bacon” but it is unclear as of yet what pieces have been taken.

Yves Bouvier pushes to have New York art consultant’s dealings revealed in US court (Switzerland)
(14 March 2016; The Art Newspaper)
Art consultant Sandy Heller is mixed up in the Bouvier/Rybolovlev fight, with more info on why this is coming to the US.

Former teacher calls for valuable art to be returned for pupils (UK)
(12 March 2016; The Guardian)
The paintings were donated by artist Mary Fedden but were removed by the local council and handed to a gallery.

Fire destroys roof of historic Wythenshawe Hall in Manchester (UK)
(15 March 2016; BBC News)
“The timber-framed hall was built in 1540 “, and the roof and first floor are lost. The cause of the fire is being investigated.

France and Britain prepare for battle over Joan of Arc’s ring (UK, France)
(16 March 2016; The Art Newspaper)
The ring was likely owned by Joan of Arc but it also likely seems to have left the UK illegally.

China Fights Losing Battle Against Tomb Raiders (China)
(16 March 2016; The Epoch Times)
“Tomb raiding is already a full-fledged industry in China.” Some startling numbers, if they can be believed.

Violence, dead bufallo, stolen idol raise tensions in Agra district (India)
(13 March 2016; The Times of India)
A Jain idol from a temple near Serai Khawaza was stolen and then found hidden in a sack of rice.

800gm silver articles stolen from temple (India)
(14 March 2016; The Times of India)
The silver ornaments were taken from the Hanuman temple located in the Mayur Park area of Aurangabad.

400 year-old ancient statues stolen from a temple in Odisha (India)
(15 March 2016; Odisha Sun Times)
The two idols were stolen from the 16th century temple and had originally been brought from Rajasthan.

Theft of ancient idol: Himachal trying to extradite suspect from Nepal (India, Nepal)
(15 March 2016; Business Standard)
Extradition between the two countries being a major issue even though it seems both sides of the border are interested in seeing an end to idol smuggling.

Rama idol stolen from Kashi temple (India)
(17 March 2016; The Times of India)
The 18th century black marble piece is the 3rd antiquities theft for the town in 3 years.

Britain hands over warship artefacts to ATM (Malaysia, UK)
(18 March 2016; The Sun Daily)
“Artefact belonging to the HMS Repulse and HMS Prince of Wales, which were seized from Vietnamese looters last year, will be exhibited at the Port Dickson Army Museum.”

Thousands of rare artefacts at risk, says archaelogy director (Pakistan)
(17 March 2016; Daily Times)
Pakistan is suffering from a lack of space to house artefacts, particularly those recovered by customs.

Theft of Aurangzeb-era Quran: HC directs IO’s personal appearance (Pakistan)
(20 March 2016; Kashmir Reader)
The piece was taken from the Shri Pratap Singh museum in 2003 and the course is not pleased with the investigation’s progress.

The antiquities looting crisis in the Middle East
(12 March 2016; Al Jazeera)
Things are bleak when poverty and conflict are at the root of archaeological looting.

The Trouble With the Maadana: Could an Israeli national symbol be a fake? (Israel)
(16 March 2016; New Republic)
An interesting long read about a possibly faked antiquity that made it on to the half-shekel.

6 out of 6: ALL of Syria’s UNESCO Heritage Sites damaged or destroyed during civil war (Syria)
(15 March 2016; RT)
A depressing list. Not to mention the other heritage sites destroyed.

The Copycat Economy
(14 March 2016; Business of Fashion)
“Do knockoffs harm the fashion business? Or does copying keep the wheels of the industry turning?”

With Its Own Arts Center, Beast Jesus Rises Again (Spain)
(18 March 2016; Hyperallergic)
Our most favourite of restorations is getting its own arts center in Borja, Spain.

Thai gardener whose $20 mn heist caused Blue Diamond Affair becomes monk (Thailand, Saudi Arabia)
(17 March 2016; Hindustan Times)
The gardner, who stole $20mil in gems from the palace of a Saudi prince, has become a monk to redeem his karma.