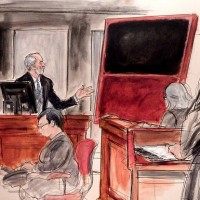 Beltracchi: The Art of Forgery by Arne Birkenstock
(29 January 2016)
The Wolfgang Beltracchi film has come to Netflix, but this forger flick feels forced.

Curious about antiquities trafficking and art crime? Study with me
(29 January 2016; Anonymous Swiss Collector)
The free online course Antiquities Trafficking and Art Crime opens TODAY (1 Feb) so sign up. It’s low key, move at your own pace, and hopefully informative. Want more than that? Here are your options, including online master’s courses, full master’s degrees, PhD research, etc. Contact me with any questions.

Meet the heroes who risked their lives for our cultural heritage
(26 January 2016; FutureLearn)
“True protection of cultural heritage involves far more grit and sacrifice, perhaps more than you would imagine.”

In the frame for a cutting-edge course on art theft
(27 January 2016; Evening Times)
Another feature on my free online course which starts 1 Feb.

A Brief History of Art Forgery—From Michelangelo to Knoedler & Company
(30 January 2016; Artsy)
For all of you watching the Knoedler trial, some forgery cases brought to you by Leila Amineddoleh.

Using Social Media to Predict When Precious Antiquities Are Under Threat (Egypt)
(26 January 2016; Slate)
On culture crimes in the MENA region.

El tesoro de los Quimbayas (The treasure of the Quimbayas; Colombia, Spain)
(25 January 2016; El Universal)
Should the ancient Quimayas Treasure be returned to Colombia from Spain?

Colombia High Court Weighs Demand Spain Return Gold Treasure (Colombia, Spain)
(28 January 2016; ABC News)
The Quimbaya Treasure was given to Spain as a gift in 1893 but the petition claims this was not actually a legal move.

Colombia rejects asking Spain to return donation of ancient gold pieces (Colombia, Spain)
(29 January 2016; El País)
The court is still deciding but the government says that the gift was legal.

Sotheby’s Announces Significant Losses in Its Historic Taubman Sale (USA)
(25 January 2016; ArtNet News)
The $12mill loss for the 4th quarter is in large part because of their attempt to sell the art collection of their convicted ex-chair.

Getty displays Medieval illuminated pages after legal battle finally ends (USA)
(26 January 2016; The Art Newspaper)
The unsuccessful five year lawsuit filed by the US branch of the Armenian Apostolic Church maintained that the pages were looted during WWI.

Carmel art gallery catches theft on camera (USA)
(26 January 2016; KSBW)
“It is absolutely someone who couldn’t live without a Richard MacDonald sculpture”. That guy needed that cheetah

Director Stephan Jost Steps Down from the Honolulu Museum of Art in March (USA)
(27 January 2016; Honolulu Magazine)
“I don’t believe we should have anything to do with looting of archeological sites. And most likely this material came out of that, so we didn’t meet our own standard 10 years ago, but let’s make it right.”

The Professor and the Pueblo, Was the disclosure of Acoma traditions exploitation or scholarship? (USA)
(27 January 2016; Santa Fe Reporter)
“Current and former members of Acoma’s tribal government spoke eloquently and at length about what they felt was a violation by Nabokov, comparing his work to that of grave robbers who sell Native artifacts illegally.”

The arrival and success of Indian curio shops in Tempe (USA)
(28 January 2016; The Arizona Republic)
Tourism and cultural appropriation. The popularity of ‘Indian’ curios.

The Modern Hobby of Ancient Coins — A CoinWeek Exclusive with Harlan J. Berk (USA)
(28 January 2016; Coin Week)
In which Berk undermines his own expertise by wildly claiming that archaeologists don’t care about or study coins.

Thousands of dollars missing from Museum of Idaho (USA)
(29 January 2016; East Idaho News)
The museum’s former money manager is accused of taking over $100k and 130 days worth of the museum’s financial records.

Probation for dealer who smuggled artifacts from grave sites in Pakistan (USA, Pakistan)
(29 January 2016; The Washington Post)
I suppose a conviction is not nothing, but the market end never really goes down for their crimes.

Top US prosecutor has art market in his sights (USA)
(1 February 2016; The Art Newspaper)
Come on, Preet Bharara, let’s see some real sentences and punishment on the market end.

Knoedler Gallery Heads to Trial in Sale of a Fake Rothko (USA)
(24 January 2016; The New York Times)
It begins.

Knoedler fakes trial could be a game-changer for the art market (USA)
(25 January 2016; The Art Newspaper)
This is the art soap opera to watch

Richard Diebenkorn’s Daughter Challenges Ann Freedman’s Story at Knoedler Forgery Trial (USA)
(27 January 2016; ArtNet News)
The artist’s daughter said that she told the Knoedler gallery folks that their Diebenkorns were dodgy but they sold them anyway.

Eleanore De Sole Breaks Into Tears During Knoedler Forgery Trial (USA)
(30 January 2016; ArtNet News)
“Its provenance was exactly what we’d been told,” she said. “I went into a shaking frenzy and cried.”

Proposed bill could allow looting of artifacts, experts fear (USA)
(25 January 2016; Florida Today)
This is a horrible, destructive idea. It is a license to loot.

Indigenous Leaders Fight Bill Promoting Citizen Archaeology: “Do Not Disturb the Spirits of the Water” (USA)
(29 January 2016; Broward Palm Beack New Times)
“Passage of the bill, they warn, would result in looting and vandalism of sacred items.”

Germany’s looted art probe efforts ‘failing’ (Germany)
(25 January 2016; The Jewish Chronicle)
I can’t help but wonder if part of the problem is that a solid definition of success wasn’t made clear from the start.

Man on trial for having ancient stolen books in his house (Ireland)
(27 January 2016; The Journal)
The 67 antique books were taken from Carton House in Co Kildare round 2006.

US museum gives Italy back looted head of Greek statue (Italy, USA)
(29 January 2016; The Local)
More loot heading back from the Getty.

Switzerland to Finance Research Into Disputed Art (Switzerland)
(26 January 2016; The New York Times)
Grants of up to $100,000 will be offered for research into Nazi-looted art

Jewish Heirs Sue Swiss Museum to Recover Constable Painting (Switzerland)
(25 January 2016; The New York Times)
“Dedham From Langham” is claimed by the heirs of Anna Jaffé but is in the possession of the Musée des Beaux-Arts in La Chaux-de-Fonds who argues that Swiss law doesn’t require restitution.

Why a Swiss gallery should return its looted Nazi art out of simple decency (Switzerland)
(27 January 2016; The Guardian)
Jones asks “Is there a backlash against restitution in the museum world?”

Man arrested over alleged theft of Roman coins from Chelmsford Museum (UK)
(27 January 2016; Yellow Advertiser)
But the coins have not been recovered.

Heartbroken pupils write letter to thieves to return Geevor Tin Mine artifacts (UK)
(28 January 2016; The Cornishman)
The stolen items have little monetary value but are very important to teaching programmes for school children.

Van Gogh’s Garden at Auvers, once labelled a fake, gets its day in the sun at Royal Academy (UK)
(30 January 2016; The Art Newspaper)
An interesting case about how totally unsubstantiated rumours of a piece being fake turn the art market on its head.

On the trail of the lost bulls: art detectives who track down missing public treasures (UK)
(30 January 2016; The Guardian)
More on the quest to find and recover missing pubic art in the UK.

Stolen art tracking companies ALR and ARG embroiled in ‘bizarre’ legal row (UK)
(28 January 2016; The Independent)
More on the dispute, legal and otherwise, between the ALR and the ARG.

Tate director backs Art Fund’s call for UK export licence reform after Rembrandt fiasco (UK)
(1 February 2016; The Art Newspaper)
The argument is that if a public appeal is opened, there must be a guarantee that the owner will sell and not withdraw application of export.

Connecting with artefacts taken by Cook (New Zealand)
(25 January 2016; The Gisborne Herald)
“You could feel the taonga crying for home.” Consultations are beginning between the National Maritime Museum in London and Maori groups near where Cook first landed.

Five men paraded through the streets of Guizhou as punishment for stealing cultural relics (China)
(30 January 2016; Shanghaiist)
The men were caught stealing items that came from a temple in in Yelang town of Tongzi county that had been destroyed in the Cultural Revolution.

Theft of historic daggers: Police fail to make any breakthrough (India)
(29 January 2016; The Tribune)
A yeas since the theft of these artefacts; daggers are back but no one arrested.

The Economist uses virtual reality to reconstruct museum lost in IS attack (Iraq)
(28 January 2016; The Drum)
Teaming up with Project Mosul

Lebanese authorities backtrack over high-profile curator’s passport renewal (Lebanon)
(25 January 2016; The Art Newspaper)
“Tohmé had said that she was targeted due to her influential role in the Lebanese culture sector”

Someone has stolen a hockey-stick holding metal beaver from outside an Edmonton home (Canada)
(25 January 2016; National Post)
The beaver was for everyone, now it has been stolen.

Cecil Rhodes statue to remain at Oxford University (UK)
(29 January 2016; The Guardian)
The complicated balance between preserving ‘heritage that hurts’ and not inadvertently honouring it.

Marana police arrest man in connection to stolen cacti (USA)
(27 January 2016; Arizona Daily Star)
“A total of 22 cacti have been stolen over the past several week”.

Wu-Tang Clan ‘Shaolin’ Album Jacked My Art, Fan Claims (USA)
(29 January 2016; TMZ)
The artist assumes that Wu Tang thought only one person would ever see that they used his art.

Italians Mock Cover-Up of Nude Statues for Iranian’s Visit (Vatican, Iran, Italy)
(27 January 2016; The New York Times)
How could they not?