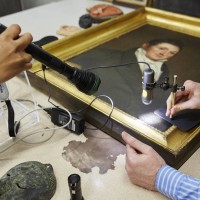 The Lives of Colonial Objects edited by Anabel Cooper, Lachy Paterson, and Angela Wanhalla
(29 February 2016)
A beautiful, personal collection of vignettes about the meanings of material things from New Zealand’s past.

Where it is safe to do so, cultural artefacts should be repatriated
(23 February 2016; The Economist)
The complicated business of return, with quotes from me!

How western art collectors are helping to fund Isis
(26 February 2016; The Guardian)
“For collectors, the solution is simple: don’t buy antiquities without completing due diligence. If you truly love art and antiquities, do not buy stolen art.”

Guard Shot Dead by Looters at Archaeological Site in Egypt (Egypt)
(22 February 2016; ArtNet News)
The guards shot in the looting attempt have died.

Looters Kill Two Guards at Ancient Egyptian Necropolis (Egypt)
(22 February 2016; Hyperallergic)
The guards have been identified as A’srāwy Kāmel Jād and Ali Khalaf Shāker. The looters are still at large.

Preservation Is a Civil Rights Issue (USA)
(25 February 2016; Indian Country Today)
“When it comes to treating Native peoples and their ancestral lands with respect, some politicians and outdoor enthusiasts seem to have a double standard.”

Birmingham Museum of Art wants painting gone, but who owns the artwork? (USA)
(26 February 2016; AL.com)
The piece is on loan, but from who?

Met clarifies ‘pay what you wish’ entry after legal settlement (USA)
(26 February 2016; The Art Newspaper)
So “recommended admission” will now be “suggested admission”. In other words, no you do not have to pay.

Harrisburg to National Civil War Museum: Secure our artifacts or else (USA)
(22 February 2016; Penn Live)
City owned artefacts were stolen from this not for profit, privately-owned museum and the city has demanded better security.

Alarm system disconnected at National Civil War Museum prior to burglary (USA)
(25 February 2016; Penn Live)
How it became disconnected and why the disconnection didn’t alert anyone is unclear.

Museum officials disagree over security issues that led to pistol theft (USA)
(27 February 2016; ABC27)
Now there is going to be an outside security review.

Police arrest suspect in stolen dog statue case (USA)
(25 February 2016; KOB4)
The man who allegedly stole a dog statue from the Albuquerque Museum of Art and History has been arrested.

Treasure Hunters Destroy Ancient Roman Bridge near Bulgaria’s Drangovo in Search of Legendary Gold Treasure (Bulgaria)
(23 February 2016; Archaeology in Bulgaria)
“The Ancient Roman bridge on the Peshterska River seems to have been destroyed over the past weekend when local residents have seen evidence of treasure hunting raids all over Drangovo”

Setback for Picasso’s Daughter in Battle Over Sculpture (France)
(25 February 2016; The New York Times)
Maya Widmaier-Picasso has been ordered to pay €28k to the Qatari royal family as she allegedly sold it to Larry Gagosian after it had already been sold.

Symposium at MKG develops ideas for dealing with silver formerly owned by Jews in museums (Germany)
(22 February 2016; Art Daily)
Hosted at the Museum für Kunst und Gewerbe Hamburg which has about 3000 silver objects that were part of Nazi confiscation operation.

Police seize 1 mln euros’ worth of antiquities from three suspects (Greece)
(26 February 2016; eKathimerini)
The men were arrested in Athens with artefacts that appear to have come from Melitaia.

Statue stolen from Mussolini’s Roman villa to be returned (Italy, USA)
(26 February 2016; The Art Newspaper)
The current “owner” [sic] tried to sell it via an auction house in New York when it got flagged as stolen in 1983. Another win for US Attorney Preet Bharara.

The Art Loss Register locates two paintings stolen in a house burglary in Amsterdam in 2010 (Netherlands, Switzerland)
(16 February 2016; Art Daily)
The pieces were identified in a Swiss auction house catalogue.

Rare $3 million painting by French master Jean-Léon Gérôme returned after 70 years (Russia)
(25 February 2016; The Siberian Times)
Stolen at “a time when people were not looking for entertainment, but for food”.

U.S. will return stolen historical documents to Russia (Russia, USA)
(26 February 2016; Russia Beyond the Headlines)
The 18th through 20th century documents were stolen from archives in the 90s and 00s.

Get Ready for the Upcoming ‘Beast Jesus’ Documentary (Spain)
(22 February 2016; ArtNet News)
Our favourite ‘restoration’ is back and on TV.

Right-on students demand Cambridge removes bronze statue …because it was looted by Britain (UK, Nigeria)
(22 February 2016; Express)
But calling this a ‘political correctness row’ reveals the reality of this news source.

Chelmsford Museum gold coin theft linked to national security alert (UK)
(24 February 2016; The Art Newspaper)
The 14 coins which were stolen appear to be linked to a threat warning for UK museums.

Cambridge church community devastated by theft of ‘priceless’ stained glass window (UK)
(23 February 2016; Cambridge News)
The 700-year-old window in St Mary & St Michael, Trumpington, had only been reinstalled 6 months ago and was taken over the weekend.

Graffiti tagger destroys historical Smith Street feminist mural (Australia)
(26 February 2016; The Age)
The piece was painted in 1986 by Melbourne artists Eve Glenn and Megan Evans and is likely too badly damaged to save.

Denver museum to return last of looted Cambodian statues (Cambodia, USA)
(24 February 2016; Digital Journal)
“How do you think they reached the market, many missing their feet and any paperwork?”

Cultural Protection Law Revision Triggers Doubts as China’s Economy Slows (China)
(26 February 2016; The Wall Street Journal)
“The change would hand too much power to local governments and make it easier for historic sites to be destroyed.”

Ancient Buddha sculpture head to return to mainland after 20 years (China, Taiwan)
(22 February 2016; ECNS)
It was returned by a private collector.

Karkala: Thieves break into Shirlalu Basadi, decamp with valuable idols, ornaments (India)
(21 February 2016; Daijiworld)
The idols and other pieces were taken from the historic Shree Adinathaswamy Basadi in Shirlalu in Karkala.

Three Held for Temple Heist in Odisha (India)
(23 February 2016; The New Indian Express)
Two of the arrested were temple watchmen. They allegedly stole a gold cobra.

1000-year-old Idol Awaits ‘Security Clearance’ (India)
(24 February 2016; The New Indian Express)
The Uma will not be returned to the temple it was stolen from until the ASI is happy that it is secure.

Dolls Worth Rs 25 Lakh Stolen From Museum Warehouse In Rajkot (India)
(25 February 2016; Scoop Whoop)
The museum features over 700 dolls from 110 countries; these were missing from storage.

ఆలయంలో నంది విగ్రహం చోరీ (Nandi temple theft; India)
(27 February 2016; Sakshi Post)
The theft of the idol was noticed by devotees. There were two other attempted thefts at this temple.

ASI seeks info on provenance of idols (India)
(28 February 2016; The Hindu)
More partnership between the ASI and French Institute of Pondicherry (IFP) to look at stolen idol provenance.

Old graveyard dug up and no one knows who’s doing it (Pakistan)
(26 February 2016; The Express Tribune)
The Lakho Pir graveyard dates back at least 800 years and it is unclear who is destroying it.

Art gallery owner admits keeping client’s $2m (Singapore)
(27 February 2016; The Straits Times)
Jasmine Tay admitted to keeping S$2mil that was given to her by an Indonesian tycoon to buy art.

Boy finds ancient figurine during Beit She’an outing (Israel)
(25 February 2016; Times of Israel)
A rare positive story for us. The little boy was given a good citizen award by the Israeli Antiquities Authority for reporting his find. Well done!

Naughty Dog Apologizes For Stolen Artwork in Uncharted 4 Trailer (General)
(25 February 2016; The Escapist)
The game maker has acknowledged they used artwork by Azaizia Aymar without permission.

Man charged with stealing $25,000 in rare video games (USA)
(25 February 2016; Reading Eagle)
The man stole them as a house guest. Nearly all of the games have been recovered.

Some Asshole Stole This Gorgeous Piece of Batman Art Before It Reached Its New Owner (USA)
(26 February 2016; io9)
The commissioned piece by Bill Sienkiewicz was stolen en route.