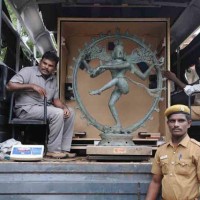 A Savage Country: The Untold Story of New Zealand in the 1820s by Paul Moon
(11 January 2016)
The sale of preserved, tattooed Māori heads to Europeans in 1820s New Zealand and historical context…which I enjoyed in context in New Zealand.

‘Broken System’ Allows ISIS to Profit From Looted Antiquities
(9 January 2016; The New York Times)
This is a global problem and the global system meant to deal with it is fundamentally flawed. A good article on this complex issue.

The secret to all great art forgeries
(5 January 2016; The Conversation)
Talent but also giving everyone what they want.

Egypt to launch antiquities database to track public collections and combat smuggling (Egypt)
(7 January 2016; The Art Newspaper)
“Working with the Antiquities Coalition and the American Research Center in Egypt”

Bathurst police search for thief after $10K painting stolen (Canada)
(7 January 2016; CBC News)
The painting was stolen from a cafe that was burned down by a suspicious fire.

Who owns the wreckage of the San José, and what should be done with it? (Colombia, Peru, Panama, Spain)
(4 January 2016; Apollo)
Everyone wants a piece of the treasures of the Spanish Main, but what is best for preserving the past?

¿Qué retos le esperan al Ministerio de Cultura? (What challenges await the Ministry of Culture.; Guatemala)
(8 January 2016; Prensa Libre)
Among the many issues the Ministry faces is the threat of looting of archaeological sites.

Reputed Mobster’s Associate Adds New Mystery To Gardner Museum Art Heist (USA)
(3 January 2015; Hartford Courant)
I am not sure how a theft that took place in the 90s generates so many scoops, but it does.

Former Field Museum employee admits to embezzling more than $400K (USA)
(4 January 2016; Chicago Tribune)
There is some discrepancy as to the amount she stole from the museum, but she stole an amount.

National Park Services Grave Robber Will Pay Restitution and Serve Probation (USA)
(4 January 2016; Indian Country Today)
Should the defendant set the value of stolen items, as is being alleged?

Amateur Sleuths on the Dinosaur Trail (USA)
(4 January 2016; The New York Times)
Is the law archaeo-centric? Are we not protecting fossils from theft?

Photographer Sues Richard Prince for Stealing His Instagram Photo (USA)
(4 January 2016; PetaPixel)
Both Prince and the Gagosian are being sued. Will this be considered fair use?

How Ancient Native American Rock Art Is Tearing a California Town Apart (USA)
(5 January 2016; Vice)
Are these sacred paintings threatened by locals trying to cash in on tourism?

Can Hobby Lobby Buy the Bible? (USA)
(7 January 2016; The Atlantic)
Why and how are the evangelical owners amassing such a huge private antiquities collection.

Up for Auction: Real Art, Owned by a Seller of Forgeries (USA)
(8 January 2016; The New York Times)
Is there a market for the real art seized from Glafira Rosales, noted dealer in fakes?

Who Owned ‘Vexed Man’ Sculpture During WWII? Austrian Dispute Hits Getty Museum (Austria, USA)
(8 January 2016; Haaretz)
The Getty bought Franz Xaver Messerschmidt’s piece 8 years ago, but it isn’t clear who had it during WWII which is problematic of course.

Nuremberg: Germany’s dilemma over the Nazis’ field of dreams (Germany)
(2 January 2016; The Independent)
Difficult question: do you preserve painful heritage or forget it.

New foundation takes over research into Gurlitt hoard (Germany)
(4 January 2016; The Art Newspaper)
This can of worms is being taken over by the Stiftung Deutsches Zentrum Kulturgutverluste.

Why the U.S. Wants Germany to Take Another Look in Its Museums (Germany, USA)
(7 January 2016; Haaretz)
Is Nazi-stolen art in German museums being taken seriously?

Roman coins stolen from locked case at Chelmsford Museum (UK)
(5 January 2016; Yellow Advertiser)
The case was alarmed but that didn’t stop the theft.

Can you help find this Co Down railway clock stolen 20 years ago? (UK)
(8 January 2016; Belfast Live)
The piece was taken from the Co Down railway museum. Have you seen it?

Sale of historic Maori cloak attracts debate on Trade Me (New Zealand)
(4 January 2016; Stuff.co.nz)
Maori politicians are calling for the piece to be returned to its correct iwi. Apparently only a registered collector of Taonga Tuturu can buy it.

$6K Maori cloak sold a month ago for $174 (New Zealand)
(5 January 2016; The Dominion Post)
More on this story. The cloak probably isn’t stolen, but someone is turning a profit by bringing it back to NZ private ownership.

Authorities halt Angkor excavating (Cambodia)
(8 January 2016; The Phnom Penh Post)
A businessman was using a digger to dig for building material within the protected area. He apparently didn’t know what he was doing was wrong.

Chinese ‘tomb raider’ and gang jailed for plunder of ancient relics (China)
(5 January 2016; South China Morning Post)
The leader of the gang was given a life sentence and 24 others were given various prison terms.

Bronze statue goes missing at Western Monastery (Hong Kong)
(4 January 2016; Ejinsight)
The statue isn’t ancient, but it is missing and appears to have been stolen.

Theft of idols from Hiriyangady Basadi – two convicted (India)
(5 January 2016; Daijiworld)
For the theft of pieces from Adinatha Swamy Teerthakara Basadi at Hiriyangady.

Thieves walk away with Prophet’s 1,400-yr-old footprint from mosque (India)
(8 January 2016; The Daily Star)
The footprint of the Prophet Mohammad was taken from a mosque in Patna.

Thieves target two temples in Junagadh (India)
(8 January 2016; The Times of India)
Among the items taken were antique silver goods.

Cop killed in Bihar, Opposition to launch protest (India)
(9 January 2016; The Asian Age)
Article notes that in the past 60 days, 16 incidents of idol theft have been reported in Bihar

Brass lamp worth Rs 15 lakh stolen from temple (India)
(10 January 2016; The Pioneer)
The 400kg lamp was taken from Lord Ayyappa temple which has no CCTV but does have a guard that didn’t notice the theft occuring.

After plagiarism claims, Malaysian ad firm disqualified from Kancil awards (Malaysia, UK)
(8 January 2016; Maylay Mail)
It turns out that there are more than one instances of alleged plagiarism from this firm

The Gods are still leaving (Nepal)
(9 January 2016; The Kathmandu Post)
Idol theft in Nepal has not slowed. The where and how. Some quotes from me.

KP Antiquities Act 2015 (Pakistan)
(5 January 2016; The Nation)
An attempt to stop the looting ‘goldrush’ in the KP region

Van Dyck painting found in Istanbul (Turkey, Georgia, Russia)
(8 January 2016; Hurriyet Daily News)
The stolen painting was recovered in a police sting from businessmen who say they bought it in Georgia.

Justin Bieber kicked out of ancient fortress in Mexico after ‘pulling his pants down’ (Mexico)
(8 January 2016; Express)
Tulum is an exciting place, but it seems Bieber couldn’t contain himself.