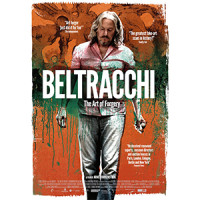 The Wolfgang Beltracchi film has come to Netflix, but this forger flick feels forced.

Beltracchi: The Art of Forgery by Arne Birkenstock
2014 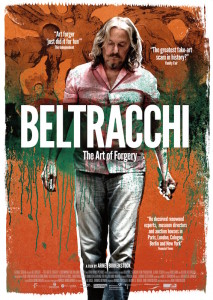 For the past year or so I have been curious about this film, mostly because I was unable to track down a copy of it. It’d just come up in my daily web scourings for art crime news because the now-famous forger Wolfgang Beltracchi is art crime incarnate. I tried not to look at the reviews so as not to colour my (eventual) experience of the film with someone else’s opinions and I mostly succeeded. I waited it out…and boom! There it was tonight, Beltracchi: The Art of Forgery, suggested for me on Netflix. After making some super tasty butternut squash soup (if I do say so), I sat down to watch. Slurp, slurp, art.

The film was a bit meh but I don’t regret watching it. There are certain far, far, worse things that you could be watching on Netflix. Far worse.

Wolfgang Beltracchi kinda sucks. He is pretty lame, just as a person. If tolerable personality is a continuum, he comes across as existing in the space between “Okay I guess” and “Totally detestable”. 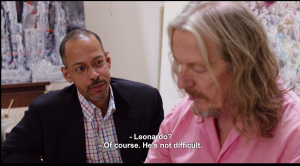 This means the viewer certainly doesn’t like him, but also can’t work up the energy to bother to hate him. He doesn’t feel worth the time. I found myself thankful that he wasn’t my relative, neighbour, or colleague. Not because he is a convicted art fraudster, but rather because he is exactly the kind of person who I can’t stand: absolutely convinced of his unsubstantiated greatness, shallow creatively and intellectually, entitled, tasteless, and unaware of the beauty inherent in one’s own shortcomings. His wife was kinda lame too in a similar way. His friends were the worst. I guess his kids were probably okay. 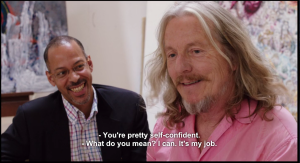 That Beltracchi was so lame wasn’t the filmmaker’s fault. We don’t all win the charming, intellectual, erudite forger lottery for our film projects. However the film didn’t quite seem to come together around anything. Am I supposed to like Beltracchi or hate him? Am I supposed to be sympathetic or condemn him? Even, am I supposed to make up my own mind? Totally unclear. The film is quite slow moving and I am unsure of its structure…the narrative didn’t quite flow. I could see how they were trying to weave a few points in time together as a story but that really just made it seem like it was taking a really long time to get to the point.

I guess in some ways I am upset that I didn’t get to see the film(s) that I wanted to see, I got another film entirely. Thus I will now very unfairly suggest films I would have rather seen. I would have liked:

Let me tell you how profoundly uninterested I was in the constant Beltracchi family photos and videos. The most uninterested.

But there were some interesting bits, don’t get me wrong. 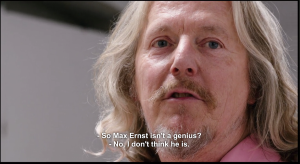 Like the fact that Beltracchi is entirely unable to grasp the concept of true artistic inspiration. He sees nothing at all in original innovation. In his universe he is a better artist than Max Ernst because his Ernsts are “better” than real Ernsts. He Ernsts better than Ernst Ernsted, so Ernst is no genius. The film then introduces you to Ernst in his own words, speaking about overcoming a blank canvas, rubbing paper on floorboards because the grain starts to move, experimenting, growing, incorporating. Beltracchi has nothing like this in him. He is working entirely with ideas that already exist. They’ve already been developed to their own perfection. He gets to just use that perfection, easy-peasy, he doesn’t have to develop anything for himself. Perhaps that’s why his own artworks (under his name, not forgeries) are really rather terrible. 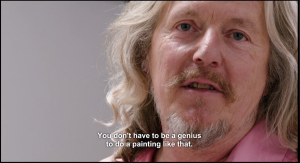 I wonder to what degree this lack of true artistic understanding exists in every art forger. This not having ‘it’ combined with not realising what ‘it’ is.

Plus the process bits were cool. The methodology section. I was quite drawn to the idea of scraping a pre-existing painting off an old canvas. I found myself wanting to do that, wishing that I was doing the scraping. I am not sure what drew me to it, the strange joy of destruction? That I like meticulous but hands-on things? I don’t know. But that was interesting to watch and to lust after. Perhaps even more interesting, once the canvas was scraped lines still remained from the original painting. These governed the structure and form of Beltracchi’s forgery, not any sense of higher design. He had to cover the understuff up, that’s all. Bleak. 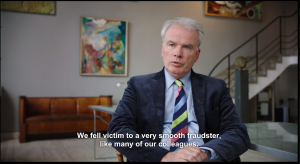 This! Tell us more about this, filmmakers!

Now I am back to what was missing, the market. The art market was sort of splashed on at the end. Even though Beltracchi and his wife clearly conceived of themselves as blameless, placing guilt squarely on the art market, the film barely scratched the surface of that world. Poor provenance research and trust of a connoisseur’s eye. Trusting dealers’ reputations above anything else. Poor reporting of previous owners, back door dealings, and the vast amount of money. The market and detection advantages of forging some artists over others. Indeed one of the few dealers that was interviewed said “the question of authenticity is at the heart of the art market”, but the film failed to explore that important component of the story.

Instead we got to look at the Beltracchis’ holiday snaps.

Should you watch this film?

Sure. It was an hour and a half okay spent. Don’t pay to watch it, but if you have Netflix pick this over, you know, deciding to watch MacGyver for the first time since 1992. Beltracchi: The Art of Forgery is totally worth a look and you will come away with things to think about. MacGyver will just let you down…don’t ruin your memories of it. 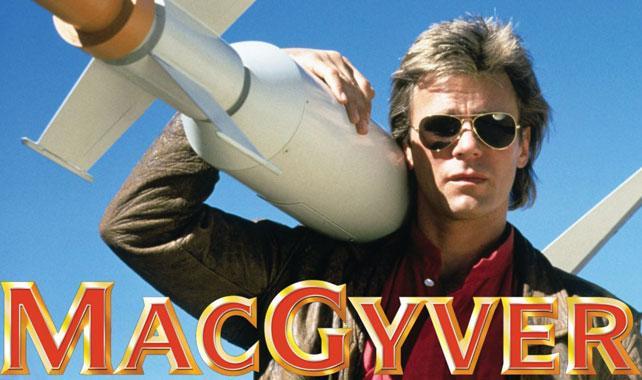 Everything I once believed, shattered with one click of a Netflix play button. MacGyver is terrible.