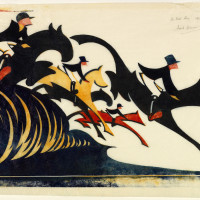 Nazi-era restitution claims are just the tip of the iceberg
(7 December 2015; Apollo)
A look at civil claims on state seized art.

Concern for Libya UNESCO site after Islamic State said to take over (Libya)
(12 December 2015; The Times of Israel)
Sabratha may be under jihadi control.

Fake Mexican Antiquities by Leopoldo Batres (1910, PDF) (Mexico)
(9 December 2015; Anonymous Swiss Collector)
An early book on Mesoamerican artefact forgery scanned and there for you to enjoy.

Let Leonard Peltier Paint (USA)
(6 December 2015; Indian Country Today)
Reaction to the removal of Peltier’s work from “a Washington State exhibition of Native art due to complaints from ex-FBI agents”.

The heist of the century (USA)
(6 December 2015; CBS News)
Coverage of the Gardner Museum theft.

Art Crime Detectives Expose the Ugly Truths of the Art World (USA)
(8 December 2015; The Creator’s Project)
A profile of “K2 Intelligence and their Art Risk Advisory”.

Judge Suspends Lawsuit Against U. of Oklahoma over Stolen Nazi Art (USA)
(8 December 2015; Insurance Journal)
As negotiations continue with the claimant of the Pissarro.

Recap of “Rethinking Art Authentication” at the New York City Bar (USA)
(10 December 2015; Lexology)
A summary of this event.

Increíble robo de campanas (Mexico)
(11 December 2015; El Sol de Zamora)
More on the theft of the bells from the church at Zozea.

Who wants to be a galleonaire? (Colombia)
(12 December 2015; The Economist)
Pushing the opinion that “if governments want the loot, they will have to give treasure-hunters an incentive to look for them.”

European states urge action against IS antiquities dealing (General)
(8 December 2015; Yahoo News)
“Germany, Italy and France called Tuesday for the European Union to crack down on the illegal trade in antiquities used to bankroll attacks by the Islamic State group.”

Museum Sues Wikimedia for Hosting Copyrighted Photos of Its Public-Domain Artworks (Germany)
(8 December 2015; Hyperallergic)
The Reiss Engelhorn Museum says 17 specific images must come down as they were commissioned from an in-house photographer.

Antiquities Dealer Leonardo Patterson Faces New Criminal Charges (Germany, Mexico)
(8 December 2015; The New York Times)
On the conviction of Leonardo Patterson. Be sure to click on the link to read about El Manatí (by me).

Greece Will Not Further Pursue the Return of Parthenon Marbles (Greece, UK)
(9 December 2015; Greek Reporter)
They mean to put “in court” and “for now” on the headline.

UN Resolution Calls for Return of Parthenon Sculptures to Greece (Greece, UK)
(11 December 2015; Greek Reporter)
Not just about the marbles.

‘Restitution of a lost beauty’: Caravaggio Nativity replica brought to Palermo (Italy)
(10 December 2015; The Guardian)
The piece was stolen in 1969 and hasn’t surfaced. A replica takes its place.

El otro tesoro (The other treasure; Spain, USA)
(6 December 2015; Cadena Ser)
In light of recent shipwreck news, a look at the case of Odyssey Marine and the wreck of the Mercedes.

Misstanke: IS-stulen konst i Sverige (Suspicion: IS-stolen art in Sweden; Switzerland, Syria)
(6 December 2015; Aftonbladet)
Unsupported statements that IS-looted antiquities are ending up in Sweden; such statements help no one.

Sea god statue set to make welcome return (UK)
(11 December 2015; News Letter)
This if after the odd theft of the Manannán Mac Lir, which sustained damage.

Banksy’s sculpture ‘The Drinker’ is returned ten years after it was stolen by art activists but they have added their own special twist and scrawled `Take the p***’ on its plinth’ (UK)
(12 December 2015; The Daily Mail)
“The Drinker statue was stolen by the ‘arto-politico humourist’ group Art Kieda”

Report: Paintings stolen from Hoorn museum surfaces in Ukraine (Ukraine, Netherlands)
(7 December 2015; NL Times)
Paintings from the Westfries Museum in Horn stolen in 2005 appear to have surfaced in the hands of militant in Ukraine.

Ukraine Jumps Into Stolen Dutch Paintings Mystery With Eye To Referendum (Ukraine, Netherlands)
(11 December 2015; Radio Free Europe)
Thinking about this alleged surfacing of stolen Dutch paintings in Ukraine with an eye to a EU-focused referendum.

Theft raises security concerns in temple village (India)
(7 December 2015; Times of India)
An ornament was stolen from the head of the goddess Mauliksha in Maluti

Break-in at heritage temple: Maluti goddess loses gold eyeballs, jewellery (India)
(7 December 2015; The Telegraph)
More on the theft at Maluti. Gold eyes, a head ornament, and a trident were taken.

Kapoor moves HC seeking to quash transfer of trial against him (India)
(7 December 2015; Business Standard)
Kapoor understandably would not like to have his antiquities smuggling trial moved to Madras High Court.

Antique racket behind vandalism? (India)
(11 December 2015; The Times of India)
Police thing an antiquities theft gang is behind recent thefts at Bishnupur.

Cops find Jain idol in ditch (India)
(6 December 2015; The Telegraph)
The very large idol was found dumped in a field.

Villagers reject mummy conditions (China, Netherlands)
(11 December 2015; Shanghai Daily)
The conditions, which include the collector being paid for the stolen piece, were understandably not acceptable. Getting paid even though you were foolish enough to buy looted antiquities…

Syrian woman faces 12 years in jail for ‘smuggling ancient coins’ (Turkey, Sweden)
(9 December 2015; Hurriyet Daily News)
The woman was on her way to Stockholm with the 173 coins.

Ask Flipped: Where Should I Hang My Stolen Artwork? (General)
(10 December 2015; Curbed)
Some actual advice on where to hang your less than legal artwork.

Two metal detecting friends fall out over which of them discovered a haul of 1,600 Roman coins worth £8,000 buried beneath a remote field (UK)
(7 December 2015; The Daily Mail)
Metal detecting drama.