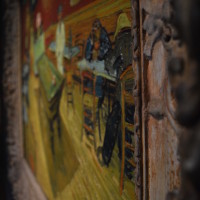 Thanks to a kind speaking invite from Yale’s Institute for the Preservation of Cultural Heritage, I had the opportunity spend a little bit of last week looking at the University’s campus and, of course, its art and antiquities collections.

Campus: like someone liked the Cambridge idea, but wanted to go with more open space and, you know, large roads at right angles. A strange take on something familiar for me.

Art and Antiquities Collections: Wow. I didn’t schedule enough time for them. I…need to go back.

In particular, I wanted to take a peek at Vincent Van Gogh’s The Night Café, which I have been reading quite a lot about. To make a long story short:

An awesome breakdown of the whole thing is available here on Arthemis, the website of the Art-Law Centre at the University of Geneva.

As you can imagine, this is a divisive case. The natural question is ‘Why do we return art nationalised by or force-sold to the Nazis, but not pieces seized by other governments?’ I can’t help you there folks. I can say that there will likely be more Russian cases which attempt to follow the success of Holocaust art cases. I can also say Cuba will be a thing.

That all said, it should be obvious to you why my camera and I went to see The Night Café. My kind of thing. What I didn’t expect is that I found it to be quite beautiful… and totally three dimensional.

Really, that was the striking part. I’ve seen photos of the painting before. Many of them. None of them convey just how far the paint projects from the canvas for certain features. Thus, dear readers, I got all up in Van Gogh’s face (well café owner Joseph-Michel Ginoux’s face to be fair). I took a few snaps of the dynamic lumps of oil on the piece before the security guards kindly told me to back the heck off. No glass on the art? I’m IN THERE.

So step back a moment from the alleged art crime, ignore the dispute, click to enlarge, and enjoy the art. 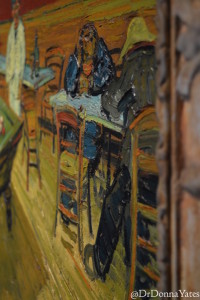 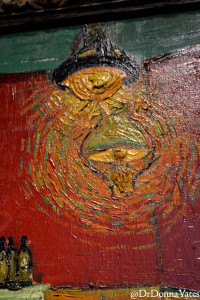 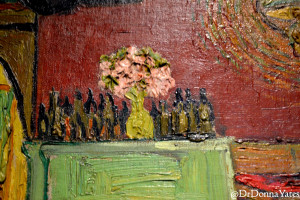