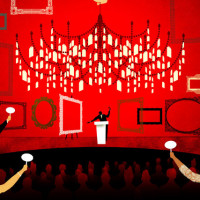 The Scientist and the Forger: Insights into the Scientific Detection of Forgery in Paintings by Jehane Ragai
(30 October 2015)
If you work in art in any capacity, you NEED a primer on art science.

TV Turns to the Art World as the Latest Glamorous Setting
(28 October 2015; The New York Times)
“The Art of More” is a new series that purports to be set in the underbelly of the art world/

ضبط خلية تنتمي لـ«داعش» استهدفت الأهرامات و«الإنتاج الإعلامي» (“Daesh” cell arrested for plan to target the pyramids; Egypt)
(26 October 2015; Almasryalyoum)
The multinational group is being held for 45 days pending charges that they were going to target Giza in an attack.

What’s Happening With Ux Benka? (Belize)
(30 October 2015; 7 News Belize)
Update on this difficult case: black man is accused of squatting on and destroying an archaeological site. Maya community is accused of unlawfully imprisoning him.

Vandalism of REDress art project seen as further violation of missing and murdered aboriginal women (Canada)
(30 October 2015; Global News)
The dresses hang are hung from trees and 10 have been damaged or stolen.

Spain Returning over 100 Pieces of Stolen Art to Ecuador (Ecuador)
(27 October 2015; TelesurTV)
The items were seized during a drug financing investigation.

Is one of the world’s rarest paintings lost somewhere in Washington? (USA)
(25 October 2015; The Washington Post)
You might just have a missing painting by James Alexander Simpson in your attic. Best check.

Exclusive: Feds Investigate Hobby Lobby Boss for Illicit Artifacts (USA)
(26 October 2015; The Daily Beast)
There are no words beyond “finally”.

Monmouth’s Earp Birthplace Museum in limbo (USA)
(26 October 2015; The Register-Mail)
A weird situation. The renter was ‘renovating’ the space by removing various modern appliances without permission to make it look ‘authentic’.

Christie’s Withdraws Portrait Gifted By Richard Avedon After Foundation Complains (USA)
(26 October 2015; ArtNet News)
The Avendon Foundation asserts that the portraits were never intended for sale but it is unclear if there is a contract in place about this.

Canoe stolen decades ago returned to Stillaguamish Tribe (USA)
(27 October 2015; Herald Net)
The dugout was stolen in the 1960s. The Stanwood Area History Museum, in researching the piece in their collection, discovered this and voted unanimously for return

Is a $20 auction find a Winslow Homer or a forgery? (USA)
(28 October 2015; The Washington Post)
Connoisseurs of yore have said it’s a forgery, but we all want to live the dream.

Stolen artifacts, ISIS money and a New Orleanian on the case (USA)
(28 October 2015; The Times-Picayune)
A profile of The Antiquities Coalition’s Tess Davis

A New Battleground for ‘Classic Art’ (USA)
(30 October 2015; The New York Times)
Collection of disgraced/convicted former Sotheby’s chair A. Alfred Taubman is going under the hammer.

Vandals Steal SculptureWalk Art (USA)
(30 October 2015; Keoland)
This is the fourth time a sculpture has been stolen from the Souix Falls SculptureWalk.

Sculpture stolen from Tucson artist (USA)
(31 October 2015; Tucson News Now)
The piece by Al Glann may have been taken for scrap.

National monuments must be protected by clear laws (Ireland)
(27 October 2015; The Irish Times)
A call for a constitutional amendment and comprehensive legislation to protect cultural heritage.

Da Chicago a Trani: la Diocesi recupera 109 pergamene antiche (From Chicago to Trani: the diocese recovers 109 ancient parchments; Italy)
(29 October 2015; Trani Viva)
The documents were stolen in the 70s and 80s from libraries and archives.

Saving an Ancestral Cemetery (Poland)
(26 October 2015; BU Today)
The search for Jewish headstones that were used by the Nazis to pave roads.

Valuable painting of Paula Yates stolen in Hastings (UK)
(28 October 2015; BBC News)
The painting, by Stella Vine, was taken from a private home.

UK gives £3m to protect Iraq antiquities from IS terrorism (UK)
(28 October 2015; BBC News)
The £3mil project is said to be a pilot for a larger fund

Literary vandal defaces the summit of Scafell Pike with poetry in permanent black ink (UK)
(30 October 2015; The Telegraph)
R. Bennet appears to have scrawled “The Emerald Tablets of Thoth” on the rock marker.

Cambodia returns sculptural fragment after 3-D scans show it fits Cleveland Museum of Art’s Krishna (photos) (Cambodia)
(30 October 2015; Cleveland.com)
You saw that right, Cambodia returns it to the US! Interesting.

Ai Weiwei Accuses Lego of Censorship and Discrimination Over Bulk Order Refusal (China)
(26 October 2015; ArtNet News)
LEGO claims they cannot approve the use of their blocks for political works. Ai suggests this has something to do with LEGO’s ties to China.

SIT formed to investigate theft at Virbhadra’s ancestral palace (India)
(26 October 2015; Hindustan Times)
Now a Special Investigative Team has been formed to look into this theft from the temple at Shantikunj Palace in Sarahan.

CG Road jeweller stole 300-year-old silver idol (India)
(26 October 2015; Ahmedabad Mirror)
The jeweller was given the idol for cleaning and refused to return it, claiming it was misplaced. The temple says he stole it after commenting on the price it would fetch.

Gang breaks into temple, decamps with cash, ornaments (India)
(27 October 2015; The Hindu)
The objects, including a silver necklace for the goddess, were taken from the Sri Rajady Rakteshwari Temple at Tallur village.

Gazette sites to save artefacts (Malaysia)
(31 October 2015; New Straits Times)
The HMS Prince of Wales and HMS Repulse battleships are being looted for scrap metal

Plunder, vandalism nearly empty Bohol burial site (Philippines)
(1 November 2015; Inquirer)
Only 20 boat-like coffins remain in the caves at Barangay Basdio and there used to be hundreds

Walking an ethics tightrope: The business of collecting antiquities (Singapore)
(27 October 2015; The Straits Times)
Thoughts on the magnet pull of the past and the need to save it

Isil destroys Roman-era columns in Palmyra during execution (Syria)
(26 October 2015; The Telegraph)
These reports are currently unverified. Please remember that.

Gilded Bible seized in Tokat (Turkey)
(27 October 2015; Hurriyet Daily News)
Ten people were arrested and the Syriac bible, among other things, was seized.

Batman, Captain America vintage comics stolen from Dartmouth driveway (Canada)
(28 October 2015; CBC)
The woman left the comics in her driveway while she was unloading her car.

Modern art installation removed by cleaners who thought it was party aftermath (Italy)
(25 October 2015; Metro)
Party’s over at the Museion Bozen-Bolzano, Goldschmied & Chiari’s ‘Where are we going to dance this evening?’ was cleaned up.

Unique painting stolen from Totnes pub for ‘a drunken laugh (UK)
(26 October 2015; Herald Express)
This “unique” painting of, ahem, a ‘half Nelson’ has been returned to The Lord Nelson pub in Totnes

Ram-raiders used BULLDOZER to smash their way into an antiques shop causing £500,000 of damage — but left empty-handed because there was no cash in the safe (UK)
(26 October 2015; The Daily Mail)
There you have it.