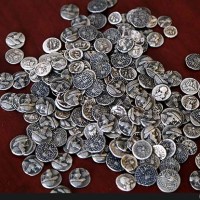 Hot this week: A notorious dealer sorta goes down in Germany, but not really.

Meet the lonely online warriors leading the fight against looted art
(24 November 2015; Fusion)
I’m not THAT lonely! About the informal online networks who work in this field.

Mali manuscripts: Nations treasure trove of ancient books saved from jihadists are once again at risk (Mali)
(26 November 2015; The Independent)
The manuscripts are in Bamako and the author asserts that they are under threat there too.

Woman who found 900-year-old ‘Parrot Lady’ statue Canada presented to India still convinced it’s just a ‘nice knock-off’ (Canada)
(27 November 2015; National Post)
The piece was repatriated to India but the woman who bought it on eBay maintains it was a fake.

U.K. fashion house pulls copied Inuit design, here’s their apology (Canada)
(27 November 2015; CBC)
“Did they think we did not exist?” A descendant of the design’s creator took KTZ to task.

ILR Students Protest Labor Cartoon Exhibit (USA)
(22 November 2015; The Cornell Daily Sun)
The cartoons, which aren’t really very provocative, have become a freedom of speech issue. The faculty have not removed the artworks.

Saginaw Tribe repatriating ancestral remains (USA)
(23 November 2015; Midland Daily News)
These are the remains of 31 individuals returned by the University of Michigan.

Stolen painting back on display in Portland (USA)
(23 November 2015; WGME)
The Portland Museum of Art is exhibiting the stolen Wyeth paintings that have recently been located and returned.

A missing Mayflower leads the list of Plymouth’s monumental mysteries (USA)
(24 November 2015; Wicked Local)
Where have all the Mayflower monuments gone?

Man charged in the death of muralist shot while painting anti-violence art in Oakland (USA)
(25 November 2015; Los Angeles Times)
Artist Antonio Ramos was killed with a gun stolen from a federal immigration agent

FBI helps Gettysburg search for Lincoln bust (USA)
(27 November 2015; The Evening Sun)
Calling in the Feds for this presidential theft.

Unsolved Arizona mystery: de Kooning painting valued at $100 million missing for 30 years (USA)
(24 November 2015; AZ Central)
The day after Thanksgiving 30 years ago a de Kooning was stolen from the UA Museum of Art.

Demand for bones leaves prehistoric relics vulnerable to poachers (USA)
(28 November 2015; The Daily Sentinel)
Some are calling poaching of fossil bone in Utah a “gold rush”.

Sacred Chilkat Robe Returning Home (USA)
(29 November 2015; Sit News)
An eBay seller was willing to take a loss; usually when lost/stolen sacred items come up for sale they are too expensive to be bought back.

The case of ‘The Gospel of Jesus’s Wife’ still isn’t closed (USA)
(29 November 2015; The Boston Globe)
A long piece on the possibility that it is a fake.

In France, Fears that Rare Book and Manuscript Fund is a €500m Fraud (France)
(19 November 2015; Art Market Monito)
The French government is looking into Gerard Lhéritier’s “Aristophil” as the fund’s own purchased may be accelerating the market.

It is hard to overstate the gravity of the Castelvecchio thefts (Italy)
(25 November 2015; Apollo)
A large number of very important works taken.

Frescoes stolen from ancient tomb go on display in Italy (Italy)
(26 November 2015; Reuters)
The 5 frescoes stolen and trafficked from Paestum were recovered from the Italian-Swiss border region.

Spanish museum squabble over Old Masters ends (Spain)
(26 November 2015; The Art Newspaper)
Spain’s National Heritage office tried to transfer 4 works from the Prado including The Garden of Earthly Delights by Bosch. This didn’t go over well.

Investigan el robo a una virgen que han mutilado en una iglesia de Córdoba (Robbery of a virgin that was mutilated in a Cordoba church is being investigated; Spain)
(26 November 2015; Europa Press)
The Virgin of Nuestra Señora del Pozo was stolen from the church of Juramento in Córdoba.

Decapitan a una virgen al robar su corona (Virgin decapitated to steal her crown; Spain)
(26 November 2015; Cordopolis)
More on the theft at the church of Juramento in Córdoba.

«La Puerta Santa abrirá, pero esto no es un año santo compostelano» (The Puerta Santa is open, but this isn’t a Holy Year; Spain)
(29 November 2015; La Voz de Galicia)
After the theft of the Códice Calixtino, the Cathedral realised they had to up their security measures.

Images released over National Museum of Scotland coins theft (UK)
(23 November 2015; BBC News)
Do you know these men? Authorities want to talk to them about the NMS coin theft.

Antique coins stolen from National Museum of Scotland ‘worth £20,000’ (UK)
(27 November 2015; STV)
Images of both the coins and possible suspects in the theft have been released.

Kirkcaldy Galleries tapestry theft remains a mystery (UK)
(26 November 2015; Fife Today)
The Rosslyn Chapel panel of the Great Tapestry of Scotland has not been recovered.

Ancient Gravestone Used As Battering Ram In Lightning Jewelry Store Heist (UK)
(27 November 2015; Huffington Post)
The jewelry robber used the historic gravestone to batter down the door of a shop in St Ives.

Encounters exhibition: a stunning but troubling collection of colonial plunder (Australia)
(26 November 2015; The Guardian)
Australian law prevents contentious Indigenous items on loan from the British Museum from being seized

Kuvempu memorial ransacked (India)
(24 November 2015; The Hindu)
Valuables and medals were stolen from the ancestral home of the poet.

State museums still await CCTV cameras (India)
(27 November 2015; The Times of India)
Following the theft at the Kuvempu memorial, a discussion of security in place at heritage sites.

Kuvempu museum theft: three arrested (India)
(28 November 2015; The Hindu)
The poet’s medal has not been recovered; the thieves say it got lost. They were paid in advance for the theft.

Kolkata a hub of antique smuggling (India)
(25 November 2015; Times of India)
Kolkata is not only a transit point, Indian antiquities are flowing out of the city.

Three 700 year old idols stolen from Chandrasekhar Temple in Kapilash, Odisha (India)
(26 November 2015; Odisha Sun Times)
The stone idols are from 3 to 4 feet tall and were taken from the entrance area of the temple.

Ashtadhatu idol worth several crores stolen in UP (India)
(29 November 2015; Business Standard)
The Durga was stolen from a temple in Bansdeeh area, Ballia.

Uneasy the head that wears the crown (India)
(29 November 2015; The Hindu)
The Koh-i-Noor “as a particularly irksome reminder of the injustice of colonialism”.

Moment in history: ‘Ancient sites vanishing due to vandalism’ (Pakistan)
(23 November 2015; The Express Tribune)
Discussions at an event at the Lahore Museum focused on site destruction.

Philippines launches search for Imelda Marcos’s lost treasures (Philippines)
(27 November 2015; The Guardian)
The country is hoping to gather tips about the whereabouts of about 200 missing pieces owned by Imelda Marcos.

Three fake Manansalas in one month—art forgers are getting bolder, more brazen (Philippines)
(29 November 2015; Philippine Daily Inquirer)
Fake Vicente Manansala artworks are coming up regularly. What does this mean for the Filipino art scene?

Swiss return two ancient cuneiform tablets to Iraq (Iraq)
(24 November 2015; Swiss Info)
They were not declared as “cultural goods” when they were imported which is a violation of Swiss law.

Hamas Seizes Chest of Ancient Gold Coins Accidentally Discovered in Gaza (Palestine)
(23 November 2015; The Algemeiner)
The Ottoman coins were discovered in Gaza and police were called when a disagreement broke out because of them.

Major seizure of woolly mammoth tusks and precious stones bound for China (Russia)
(25 November 2015; The Siberian Times)
200 kg of tusk! Impounded on the Russia/China border hidden under the false floor of a truck.

The Black Years: how Nazi art came back to Berlin (Germany)
(27 November 2015; The Guardian)
An exhibition of artworks from the Nazi era in Berlin’s Hamburger Bahnhof museum

India police sorry for detaining artist over cow installation (India)
(23 November 2015; BBC News)
You can see why a polystyrene cow dangling from a helium balloon might have bothered some people in Rajasthan but that isn’t an arrestable offence. Note, it was a pro-cow installation.

SKULL THEFT FEUD: York travellers’ site & 4 others raided, 7 arrests made, sub-machine guns seized – UPDATED (UK)
(27 November 2015; The York Press)
A massive feud which include the theft of skulls from traveller’s graves. The skulls have not been recovered.

Man stole brains from medical museum and put them on eBay (USA)
(25 November 2015; The Guardian)
David Charles has pleaded guilty to the brain theft from an Indiana medical museum.