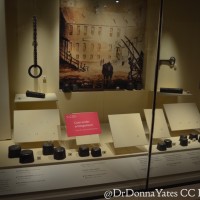 A post coin heist visit to the National Museum of Scotland

Last Saturday I visited the National Museum of Scotland in Edinburgh. A short trip from Glasgow, I mostly went to see the Lewis Chessmen to prep for a book review. While I was there I took the opportunity to check out a museum case that was very recently robbed.

If you follow Culture Crime News you’ll know that at sometime in August several renaissance coins were stolen from the Kingdom of the Scots Gallery and the theft wasn’t noticed for days, perhaps weeks. This is a particularly controversial theft because it may have occurred while museum staff was on strike. The museum management made the decision to open during the strike with only a skeleton staff as it was the week of the Edinburgh Festival: hot visitor time. The implication, which may or may not be fair, is that the collections were put at risk by this decision to open. 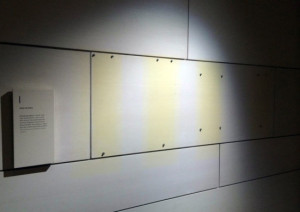 Blank spaces where the oak panels were

Yet, this isn’t the first time that this gallery has been hit. In April 2014, 15th/16th century oak panels were taken from Kingdom of the Scots. Or maybe they were taken in March. It is unclear as no one noticed they were gone for a while. A member of staff told the press “there was only one visitor services assistant patrolling the Kingdom of the Scots gallery [all three levels]”, citing funding and staff cuts.

Moving back to my own experience of the Kingdom of the Scots gallery, I didn’t know which case had been robbed so I set out to locate a member of staff to help me. It took me a full 10 minutes of specifically looking before I found a museum docent in that gallery: about 5 minutes of walking back and forth, popping my head into every room and another 5 minutes of standing next to the docent chair in hopes they’d come back. It was a busy Saturday, but there simply was no staff member in that dark, cave-like hall.

The staff member who did show me the case was clearly upset about the theft. He wondered what the motivation for such a theft would be, saying the coins would be unsellable since they were well known museum pieces. He mentioned the recent theft of a panel from The Great Tapestry of Scotland and shook his head.

The case itself is massive. I am surprised anyone got it open, but not very surprised that no one noticed while they were doing it. The case is located in a dark sideroom that likely didn’t have a staff member in it. Even though the removal would be obvious to other visitors, if there were no other visitors at the time, no one to see something and say something. Thinking about it, even on a very busy day, I was alone in another dark sideroom with one of the Lewis Chessmen for quite some time. No staff, no fellow visitors. I, however, bought a replica from the gift shop to sate my desire.

Now the case, which once housed quite a few coins, is totally empty. The staff member said that the thieves only removed a few coins, but they were the most valuable ones. I assume the other coins have been taken out while the museum evaluates the situation. Nothing informs the public that there has been a theft but I suppose that is understandable. I wonder if the coins will turn up. 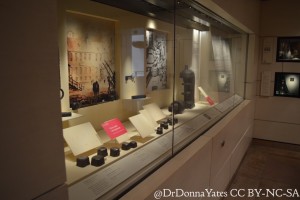 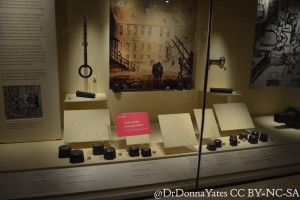 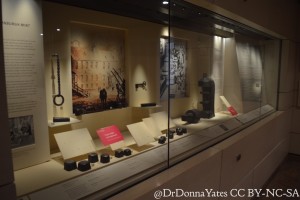 The takeaway message here is, surprise surprise, we are putting our important collections at risk by constantly cutting arts funding. Say what they will, the museum is under staffed. Staff members will tell you this. You can see it in both the lack of museum docents on any given day (such as the day I was there and was looking for one) and you can see it in the fact that both thefts went unnoticed for some time. You mean someone doesn’t do a basic walk-by check of each exhibit at closing time? Apparently they don’t.

And this isn’t to say that the NMS is at fault. The fault is with a government who values the tourist money that heritage brings, while squeezing the funding life out of it. The government’s arts funding cutbacks are the root cause of these thefts and the government should be held accountable. We need well-trained, well-paid, dedicated museum staff if we want to protect our collections for everyone to enjoy.