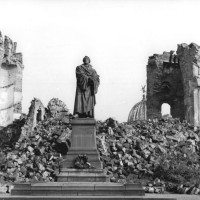 I have trouble reading a paper, any paper, without mushing the contents back onto my stuff. I suppose that is what a good academic does: instantly tests others’ ideas on and against what you know. However, sometimes I want to just read a paper, think about the thesis, and not apply it to work. Especially if I am reading that paper as part of a “get out of my art crime hole” and “expand your horizons” project for “No Work Saturday”. I tried to read Gabriel Moshenska‘s paper on curated conflict ruins like that. No dice. It made me think about my own stuff. Ah well! To be fair, that is probably the best outcome anyway.

Through WWII case studies in Germany and France, Moshenska discusses the idea of intentional preservation of conflict ruins in a pseudo-authentic state as being a manipulation of the cultural and political capital of heritage, a public maintenance of victim-hood through maintenance of a ruined space. As he puts it, he critiques the model (the “life cycle”) of temporary preservation of ruins as a display of collective pain and rebuilding of said structures as a performance of collective healing and reconciliation. He urges us to pay more attention to the motivations of the ruin curators, their gains, and concludes that “ruins-as-memorials” are serious places of business. When the motivations change, when a different form of cultural capital is needed, the ruins change (or are changed).

It is an interesting way to look at such spaces: interesting to me because I probably would have tripped on through without thinking of it entirely in this way. In fact I know I have. One of his case studies is the ruin curation and later rebuilding of the Frauenkirche in Dresden. I was there the week the rebuilt church reopened and I was interested in the situation but also let down. I remember I wanted to see an “authentic” ruin rather than just another pretty church. I see those every day. I thought I was thinking very hard about it at the time but, heck, that was a decade ago. I wasn’t.

And, really, I am now just stuck back on my own stuff, applying Moshenska’s thoughts to that. One place my mind naturally went is to Nepal which has a lot of ruin these days. Moshenska only talks about conservation of conflict ruins, Nepal makes me think of the conservation of disaster ruins. I wonder if the same curated, long term public display of victim-hood is socially expedient when one has been vicitimised by nature, not humans. In Nepal, “we will rebuild” is everywhere, literally: people are wearing that slogan on t-shirts across Kathmandu. But some buildings are in a state where they aren’t repairable. The options will be knock them down and rebuild or leave them as a ruin to remember the quake. I predict, thinking about Moshenska’s thesis, that these ruins won’t be curated and preserved as ruins. There is no cultural capital in maintained victim-hood in that situation, that isn’t the set of emotions that require manipulation in this case.

Moving to the next my-thing I thought about: the ruined churches of Yucatan and Quintana Roo. I spent April 2015 visiting 84 churches in the region, most in very small villages, and a subset of those were conflict ruins that were being used. Long story short, during the 1800s and into the early 1900s the Maya of that region rose up to resist Mexico (or whoever was in charge at the time, it’s complicated), and in an effort to get them back under control, the churches of many villages were blown up. There are a number of reasons why. The churches are central meeting places and thus were meeting places for rebels. The churches are also significant community spaces so, you know, blowing them up is a show of force and domination…breaking them. Also at certain times there was an underground and persuasive Maya semi-Christian cult devoted to a talking cross which the non-Maya obviously thought was the worst thing ever. But the churches became conflict ruins at that point.

Now, more than 100 years on, they are still ruins and I started to wonder if they were ever curated in Moshenska’s sense. They certainly weren’t rebuilt: most of them are shells that sit in the very heart of each of these villages, some with century-old rubble on all sides. Perhaps they were maintained to be that: to be a display of victim-hood and oppression following ultimate defeat. But on the other hand, I don’t think anyone sees them like that anymore. I don’t think they are meant to be some sort of authentic anything.

Indeed, some of these ruined structures are still the village church. When a priest is around, services are held either in the open-air space that a roof once covered or under some corrugated iron that has been slapped on the top of part of it. Maybe these were never ruins curated to show victim-hood, rather just the reality of poverty: the structures were built by the Spanish as part of the conversion process. People in the villages like their church but have no money to rebuild. They don’t live in structures that are anything like the church (dirt floor thatched huts vs. giant stone church) and, as it was the government that blew the place up, it isn’t like they are getting some sort of assistance to rebuild. As time goes on that just becomes how the church is in everyone’s’ mind. It’s ruined because it’s ruined. Our church has no roof and is all singed at the top. Just how it is.

Finally I started thinking about Palmyra and Nineveh and Hatra of course and the nested idea of making conflict ruins out of ruins. Re-ruining ruins. Eventually that conflict will end, what will be done with the ruined ruins? I can’t help but think that, to go back to Moshenska’s emphasis on cultural capital over some shadowy ideas of “public remembrance”, that it will likely be socially expedient to not rebuild completely (which already gets us into a weird authenticity place for an ancient heritage site), but to curate at least some of the ruins as authentic ruined ruins. To claim victim-hood and to claim it in a way that, in particular, westerners can participate in for very clear political reasons. Maintaining a recently destroyed historic mosque as a curated ruin, for example, won’t cut it in that respect. That only works on locals. No, this could be a big display. We’ll see what happens.

All in all, I have been thinking about the political and social capital gained from acts of destruction as I need to teach a bit on that. I was trying to write about it yesterday at a first year undergraduate level. With my head so far into that, I never got near to thinking about the capital gained from the victim group CURATING that destruction. A VERY interesting thought which enriches what I was doing anyway. So thanks, Gabriel Moshenska, that was a good read for my Saturday morning.