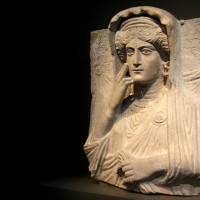 Hot this week: No art for Nazis or Neo-Nazis.

What Big Data Strategists Can Learn From A Con Artist
(27 July 2015; Forbes)
A bit of an odd connection between art forgery and bad big data for business…

Startup wants to catalogue every piece of artwork ever
(29 July 2015; Financial Review)
But will the art market and collectors participate in a for-profit uber provenance service?

Is Art Theft and Copyright Infringement On the Rise? (Kenya)
(29 July 2015; All Africa)
Accusations are flying that artist and public figure Barbara Mwamburi stole the artwork of a number of other artists and passed it off as her own.

Returning Nazi-looted art in Canada (Canada)
(29 July 2015; The Canadian Jewish News)
A piece on all of the restitution cases that have involved Canada.

`Unique’ arrows discovered in stolen SUV (Canada)
(1 August 2015; Herald News)
Some teens in Halifax were stopped in a stolen SUV: why were there Native American arrowheads in the vehicle?

Hasta 10 años de prisión para quienes demolieron capilla del siglo XIX (Up to 10 years in prison for people who demolished 19th century chapel; Mexico)
(29 July 2015; E-consulta)
The chapel was illegally demolished at the end of July. The INAH is also asking where the sacred art within the chapel has gone.

Does Cecily Brown Have a Copycat? (USA)
(28 July 2015; Blouin ArtInfo)
Where do we draw the line between similar artists/artist inspiration and full on copying?

Federal suit over Ulysses S. Grant’s coat, cup dismissed (USA)
(28 July 2015; The Patriot News)
The dispute was over a Grant coat and memorabilia that was sold in violation of a share profit agreement.

Portland man pleads guilty to art-forgery scheme (USA)
(29 July 2015; The Washington Times)
Larry Ulvi says he wasn’t forging for the money, rather the fun of it. Most of his work were forged Mark Tobeys.

An interview with Wes ley A. Fisher on the restitution of Nazi-looted art (USA)
(30 July 2015; AMA)
He is the Director of Research at the World Jewish Restitution Organisation

Ancient pictographs near Helena irreparably vandalized (USA)
(30 July 2015; Independent Record)
The rock art in Hellgate Canyon in the Helena National Forest has been struck twice by graffiti this summer. As the graffiti is scratched in, it cannot be removed.

New York University in legal saga over Villa La Pietra, half a world away in Italy (USA)
(31 July 2015; The New York Times)
NYU inherited the Tuscan estate and its art collections from Sir Harold Acton. This is being challenged by an alleged half sister.

The story of art forgers is one of fame, money and talent (USA)
(31 July 2015; The Morning Call)
Article about “Intent to Deceive: Fakes and Forgeries in the Art World” at the Reading Public Museum

Jewish cemetery in Philadelphia vandalized (USA)
(1 August 2015; Haaretz)
Around 124 headstones were knocked over in this 160-year-old cemetery.

Man cutting hedge finds stolen paintings worth €180,000 (Ireland)
(28 July 2015; The Irish Times)
The paintings were found by a holiday cottage in Co Wicklow that were taken from the Apollo Gallery, Dublin, 10 months ago.

Criminal case opened on ‘damaging world’s oldest wooden statue’ (Russia)
(29 July 2015; The Siberian Times)
Complicated situation. German scientists are accused of taking damaging samples of the statue without permission form the director of the Yekaterinburg History Museum and exporting them without a license.

Swiss watches stolen in second museum break-in (Switzerland)
(29 July 2015; The Local)
This is the second watch museum break in in the area in two months. Thieves smashed a window and stole 15 items from Musée d’Horlogerie du Locle.

Museum in Cable St about women and suffragettes turns out to be `Jack the Ripper’ (UK)
(28 July 2015; The Docklands & East London Advertiser)
While not a crime, per se, locals are upset that planning for a “Museum of Women’s History” was granted but what actually went in was some terrible Jack the Ripper tat.

Charity money and medals stolen in Ramsgate Maritime Museum raid (UK)
(29 July 2015; Isle of Thanet Gazette)
The thief broke in via a window, wrecked the place, and took money and some medals.

New Technique May Identify Stolen Stones (UK)
(30 July 2015; Archaeology)
Looking at the ‘chemical blueprint’ of the stolen stone to discover which UK heritage site it came from.

Crucifixes and plaque of Christ discovered in Fulham estate (UK)
(31 July 2015; Get West London)
They were found dumped in a plastic bag and are thought to have been stolen from a church.

Putin puts Crimean archaeological site under federal control (Ukraine)
(1 August 2015; Daily Herald)
The governor of the region appointed a priest as director of the site of Chersonesus instead of anyone experienced with heritage, archaeology, or preservation. Controversy has since followed.

Sotheby’s primed for battle over John Olsen copyright (Australia)
(31 July 2015; The Australian)
Sotheby’s argues that a denial from the son of John Olsen of the right to publish images of Olsens they have for sale is ‘anti-competitive behaviour’

Statues built on ancient bricks (Cambodia)
(30 July 2015; The Phnom Penh Post)
Two modern religious statues were removed from in front of a monastery when it was revealed they were built on stolen ancient temple bricks

Committee constituted for framing security policy of museums (India)
(27 July 2015; Business Standard)
The committee is set to review the security needs of the country’s museums with a comprehensive security policy to be developed and applied uniformly.

Thieves strike Vijayapura temple, make away with jewellery worth 12.7lakh (India)
(31 July 2015; The Times of India)
Among other things, the hands and arms of the idol Yalaguresh were stolen.

Looters find path to export antiquities via Lebanon (Lebanon)
(31 July 2015; Al-Monitor)
Including discussion with the Lebanese Ministry of Culture

How are Austerity Measures Harming Architectural and Archeological Preservation in Greece? (Greece)
(31 July 2015; Curbed)
As the government is forced to cut spending, preservation is going to suffer.

Antiquities Found on Shipwreck That Carried Elgin Marbles (Greece)
(28 July 2015; Discovery News)
And they most certainly belong to Greece!

Art, royalties and other treasures of unclaimed estates (UK)
(31 July 2015; BBC News)
Art in the UK Govt’s Bona Vacantia division. With no heirs, it reverts to the Treasury which is meant to sell it, but should it be given to museums?