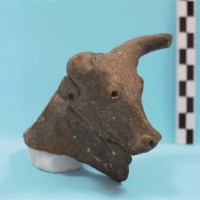 Anonymous Swiss Collector has been redesigned. What do you think? With the redesign comes some new features and focus. In particular I am going to be reviewing books, films, and papers related to these topics. If you have a review recommendation, let me know.

Scotland’s elite archaeologists target global tomb raiders
(30 August 2015; The Herald)
A feature on the Trafficking Culture project with comments from me!

Can the Market Help Preserve Threatened Antiquities?
(27 August 2015; The Wall Street Journal)
A response to Vikan’s op-ed by Leila Amineddoleh and Stephen Maurer, with Amineddoleh arguing no (obviously and rightly) and Maurer getting antiquities confused with dinosaur bones (apples and oranges).

Three found dead digging for artifacts in Monufiya (Egypt)
(25 August 2015; Egypt Independent)
The three brothers were illegally excavating in a hole hidden by their garage when they fell in the hole and became trapped.

Jute Sack Artworks Are at the Center of Simchowitz Lawsuit Against Venice Biennale Artist (Ghana)
(25 August 2015; ArtNews)
I could be said that the US dealer and Irish agent took advantage of the Ghanaian artist Ibrahim Mahama who is now resisting that.

Sudan wants to stiffen penalties for stealing antiques (Sudan)
(22 August 2015; The Sudan Tribune)
Don’t do this: ‘The minister of state at the Ministry of Tourism, Antiquities and Wildlife Adel Hamid Deglu angrily vowed to “chop the hands of anyone who dares to steal, smuggle or sabotage the Sudanese effects”‘

Zimbabwe: Safeguarding Our Cultural Property (Zimbabwe)
(24 August 2015; All Africa)
“The National Gallery of Zimbabwe, National Museums and Monuments of Zimbabwe and National Archives of Zimbabwe are uniting to fight against the illicit trafficking of our cultural property”

Native American artifacts found in van (United States of America)
(25 August 2015; Lake County Record-Bee)
The items were found in a van belonging to someone who allegedly wrote an ‘inappropriate letter’ to a 14 year old.

French Art Dealer Gailord Bovrisse Slapped with $800,000 Judgment over Fake Chagalls (United States of America)
(26 August 2015; ArtNet News)
After the buyers wired the funds for the pieces, Bovrisse informed them they were fakes but also apparently indicated he wasn’t returning the money.

Barry McGee Sign in Tenderloin Stolen (United States of America)
(26 August 2015; SF Weekly)
The sign for the SF Drug Users’ Union office by artist Barry McGee was there for three years but has gone missing in July. The other McGees there will now be removed for safekeeping

Former Lander Museum Director found Guilty of Larceny of theft of materials (United States of America)
(28 August 2015; County10)
She took over 1000 museum items and documents after she was fired from the Lander’s Pioneer Museum, Wyoming.

WWI cannon stolen from Michigan VFW post: Vets fear cannon sold for scrap (United States of America)
(28 August 2015; Examiner)
It is feared that the cannon was stolen for scrap.

Inside the search for the legendary ‘Orpheus Clock’ stolen by the Nazis (Germany)
(23 August 2015; The New York Post)
Review of The Orpheus Clock by Simon Goodman.

Plan to Withdraw Police From Russia’s Museums Sparks Fears (Russia)
(23 August 2015; The Moscow Times)
With the removal of police security it is unclear of Russian Museums will be able to afford any security.

Portrait of Putin as a Simpsons Character Stolen From Moscow Exhibit (Russia)
(27 August 2015; The Moscow Times)
The piece by Turkmen artist Amir Kerr is now in the local police station.

Russian police find pieces of bas relief believed stolen by right-wing group (Russia)
(28 August 2015; CTV)
The group that claimed responsibility said they were trying to “eradicate a cult of Satan”.

Hermitage Museum vulnerable to vandalism as police end protection (Russia)
(28 August 2015; Ukraine Today)
With the removal of the police, museums are worried about vandalism more than theft.

French couple arrested for looting archaeological site in Catalonia (Spain)
(24 August 2015; The Local)
The couple were arrested with metal detectors and stolen items.

Desaparecen dos reliquias religiosas de la parroquia de Berja de «gran valor afectivo» (Two religious relics “of great emotional value” disappear from the parish of Berja; Spain)
(27 August 2015; Ideal)
No one has seen the objects since Monday and they are presumed stolen. Security in the churches are poor.

Una expedición documenta los tesoros dejados por Odyssey (An expedition to document the treasures left by Odyssey; Spain)
(27 August 2015; El País)
I can say that Nuestra Señora de las Mercedes wreck was looted by Odyssey Marine as the court has awarded the objects found to the Spanish government. This project will look at what is let.

Ancient Tomb In Spain Destroyed And Replaced With A Picnic Table (Spain)
(27 August 2015; NPR)
Apparently workers in Cristovo de Cea mistook a Neolithic tomb for a broken stone table in need of repair.

Swiss banks’ stashes of looted art an ‘open secret’ (Switzerland)
(30 August 2015; The Sunday Times)
Information from Susan Ronald on her research into the topic

‘Disbelief’ after £15,000 worth of art stolen from exhibition at Rookesbury Park, Wickham (United Kingdom)
(17 August 2015; Hampshire Chronicle)
The paintings and sculptures were taken from Rookesbury Park estate in Wickham.

Egypt in crowd-funding campaign to save ancient statue sold by UK museum (United Kingdom)
(23 August 2015; The Independent)
The Independent may need to rethink their definition of crowd-funding. They are asking for a wealthy Egyptian in the UK to buy it.

Statue ‘might never be seen in public again’ (United Kingdom)
(24 August 2015; ioL Scitech)
The problem with private collecting exemplified by the Sekhemka statue.

Great art forger continues to ridicule experts from beyond the grave (United Kingdom)
(24 August 2015; The Guardian)
Eric Hebborn didn’t have positive words for the art establishment

Unique ‘knight’s head’ stolen from locked cabinet at the Museum of Transport Greater Manchester (United Kingdom)
(25 August 2015; Manchester Evening News)
The piece was from a vintage bus and the museum is urging people to keep an eye on junk sales

Dismaland: Palestinian artist thrown out after protesting against Israeli works (United Kingdom)
(26 August 2015; The Independent)
“Shadi Alzaqzouq, 34, said he lay down “like a corpse” in front of his two artworks” and hung a bed sheet over them…then was removed by security guards.

Donations made after drug addicts smash ancient Bodmin church window (United Kingdom)
(27 August 2015; Cornish Guardian)
This is because the damage will cost £8000 to repair.

Topaz gems stolen from Qld Museum (Australia)
(26 August 2015; Brisbane Times)
The gems were in a private museum and were a tourist attraction

Gift from Te Puea, jewellery, combs taken in theft (New Zealand)
(25 August 2015; Stuff.co.nz)
The greenstone and gold pendant was a gift from Princess Te Puea and it was stolen a day after the owners discussed donating it to a museum.

5 Cambodians get 7 years in jail for antique theft (Cambodia)
(27 August 2015; Khmer Times)
This was for the theft of relics of the Buddha from Oudong Mountain.

The Bean and the Bubble (China)
(29 August 2015; The Economist)
More on the Anish Kapoor/Chinese giant copy row.

105-year-old Urdu copy of Ramcharitmanas found (India)
(24 August 2015; The Hindu)
The manuscript was stolen from the Sankat Mochan temple at Tulsi Ghat.

Woman Journo in Net for Idol Racket (India)
(26 August 2015; The New Indian Express)
Allegedly she was helping the gang move around by flashing her journalist card.

After film director, woman arrested in idol theft case (India)
(26 August 2015; The Times of India)
More on the arrest and confession of the journalist involved in the idol smuggling ring

Seven panchaloha idol thieves arrested (India)
(27 August 2015; The Hindu)
Among those arrested is a policeman.

Gang of temple thieves held, booty worth Rs 56L recovered (India)
(28 August 2015; Deccan Herald)
The Nanjangud police say that the silver was stolen from a number of temples and home.

Taiwanese boy takes a tumble in museum and punches a hole in a painting worth $1.5 million (Taiwan)
(25 August 2015; The Independent)
It was by accident. The poor kid.

Painting damaged in Taiwan could be a fake (Taiwan)
(26 August 2015; Sky News)
This is getting interesting! The publicity around the damage has led to the revelation that the painting is almost identical to another painting meaning one could be fake

Young Israeli Girl Breaks 2,000-year-old Vase, Museum Says Thanks (Israel)
(25 August 2015; Haaretz)
The little girl rocked the case which caused the vase to fall. The museum says it gave them the excuse to do a proper restoration of the piece.

Why it’s all right to be more horrified by the razing of Palmyra than mass murder (Syria)
(24 August 2015; The Guardian)
You know, I don’t think it is.

Bull figure returns to Turkey (Turkey)
(28 August 2015; Hurriyet Daily News)
A private individual has returned the bull figure saying that it belongs in its own country.

Tourists Flock to Ksiaz Castle in Poland as Underground Nazi Gold Train Discovered (Poland)
(29 August 2015; Forbes)
Nothing quite inspires the tourists to turn out like a Nazi gold train.