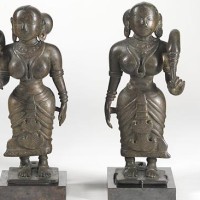 Culture Crime News is coming at you from Kathmandu this week. Apologies if it is a bit late or incomplete. If I have missed any articles, please do forward them along.

‘Art of the Con’ paints revealing picture of scammed collectors (General)
(9 July 2015; Los Angeles Times)
A review of “The Art of the Con: The Most Notorious Fakes, Frauds, and Forgeries in the Art World” by Anthony M. Amore.

Collector Fights for African Art (Angola)
(9 July 2015; The New York Times)
Sindika Dokolo and his wife Isabel dos Santos, one of Africa’s rightest couples, are buying up colonial and other looted African pieces to ‘save’ them. However his collection appears to be private.

A part of Tutmosis Karnak column arrives home from London (Egypt)
(5 July 2015; Ahram Online)
The piece was looted during the Jan 2011 revolution.

35 Greco-Roman artifacts seized in illicit digging attempt in Alexandria (Egypt)
(9 July 2015; The Cairo Post)
The pieces were found in a ground-level apartment and had been excavated from a hole in the floor of the residence.

Denuncian ante PGR al Obispo de Cuernavaca por robo (Bishop of Cuernavaca reported to the Attorney General’s Office for theft; Mexico)
(6 July 2015; Milenio)
Complicated case. The pastor of the Telpancingo temple in Morales is said to be in league with the bishop to steal money donated by pilgrims and they are accused of being in possession of stolen sacred art. An inventory of that art is missing.

Asegura obispo de Cuernavaca que no robó arte sacro (Bishop of Cuernavaca asserts that he did not steal sacred art; Mexico)
(7 July 2015; El Manana)
Ramon Castro Castro, the bishop of Cuernavaca, has stated that he is being defamed and that he has nothing to do with theft of sacred art from the Sanctuary of our Lord of Tepalcingo.

Demandan rescate de vestigios arqueológicos de Tlaltizapán (Demands to save the archaeological sites of Tlaltizapán; Mexico)
(7 July 2015; La Unión de Morelos)
The protestors are worried about highway building plans but are also calling on security to prevent looting at the site.

Bronze statue worth £40,000 stolen in brazen daytime raid in Mayfair (UK)
(8 July 2015; The Independent)
The man took a sculpture by Dame Elisabeth Frink, he was caught on CCTV.

Serpent Mound damaged by vandalism over Fourth of July weekend (USA)
(5 July 2015; The Highland County Press)
Someone drove a truck over a burial mound, leaving tracks in what seemed to be a ‘joy ride’.

Serpent Mound suspect arrested (USA)
(9 July 2015; Times Gazette)
The 19-year-old confessed to driving on the mounds as well as trying to climb up one.

Adirondack Town Mystery: Who Stole Marker for a Civil War Photographer? (USA)
(6 July 2015; The New York Times)
Mathew B. Brady was a pioneering photojournalist. Who would steal his historic marker?

How my family recovered a painting stolen by the Nazis and sold it for $2.9 million (USA)
(7 July 2015; Yahoo)
Recounting the story of Two Riders on a Beach from the Gurlitt hoard.

$70K statue torn from downtown Portland pedestal (USA)
(9 July 2015; KATU)
A suspect was arrested who climbed to the top of the statue and shook it until it broke.

Major Native American jewelry collection stolen (USA)
(9 July 2015; KRQE News)
Some of the more than 400 pieces in this private collection were more than 100 years old. Some have turned up for sale in Albuquerque.

$1 million reward offered for ruby slippers stolen from Minnesota museum (USA)
(10 July 2015; Grand Forks Herald)
An anonymous fan has offered $1mil for the stolen slippers’ return. Whoever knows something should probably roll on their friends about now.

France discreetly returns looted gold antiquities to China (France)
(6 July 2015; The Telegraph)
A messy case: a billionaire gifted the looted pieces to a museum, there were 10 years of quibbling, then in April the billionaire just handed them back himself.

German court studying Gurlitt will seeks psychiatric report (Germany)
(10 July 2015; ABC News)
His cousin is challenging the will which leaves the non-looted art to the Kunstmuseum, Bern, saying Gurlitt wasn’t competent to draw it up.

Two Dacian gold coins recovered in Poland (Romania)
(9 July 2015; ActMedia)
The coins were recovered from an auction house in Warsaw and from an individual in Poznan and have been returned to Romania.

Jewish Woman Works to Return 100 Torahs Ransacked by Nazis (Russia)
(6 July 2015; JP Updates)
Sibyl Silver’s work to get a cache of Torahs found in Russia back to their rightful owners

Signing up to the Hague Convention will do nothing to stop ISIS (UK)
(30 June 2015; Apollo)
Jenkins notes that singing the convention will have little practical effect on current conflicts.

Master forger makes rare appearance to help TV investigation into art fraud (UK)
(6 July 2015; This is Lancashire)
Shaun Greenhalgh who was jailed for creating many, many forgeries will be on a show about Lowry fakes.

Cleveland artist Frank Oriti says London’s National Portrait Gallery reports his painting safe after attempted theft (UK)
(9 July 2015; Cleveland.com)
The artwork ‘Clarity’ was targeted in a hoax heist that was meant to criticise BP’s sponsorship of the exhibition it as in.

Rare Rodin sculpture stolen during $1 million Beverly Hills heist recovered in London (UK)
(9 July 2015; The Independent)
The piece, stolen by associates of the owner’s housekeeper, turned up at Christie’s after being missing for two decades.

Meet the ‘Sherlock Holmes’ of the art world (UK)
(10 July 2015; Yahoo News)
A feature on Christopher Marinello and Art Recovery

Hindu cleric targets QAGOMA for return of Indian antiquities (Australia)
(6 July 2015; Visual Arts Hub)
Rajan Zed, who is US-based, is urging the gallery to move faster when in comes to the return of looted Indian art.

Theft won’t destroy Napoleon’s connection to Mt Martha homestead (Australia)
(9 July 2015; The Weekly Times)
The Napoleon artefacts were stolen in 2014 but publicity about the burglary led to more donations of relevant objects to the homestead’s exhibits.

Queensland Art Gallery probes past of Hindu statues (Australia)
(10 July 2015; Brisbane Times)
It should be noted that these are not Subhash Kapoor pieces. They still are probably looted.

Plea for return of artworks (New Zealand)
(6 July 2015; Otago Daily Times)
25 prints with an estimated value of $20k were stolen along with the artist Orion Das’ van in Dunedin.

Direct CCTV darshan to prevent theft in temples (India)
(7 July 2015; Bangalore Mirror)
Reporting on a new initiative to install CCTV inside every temple in the district of Karnataka to prevent theft

Father-son caught red-handed trying to sell several ivory artifacts online (India)
(7 July 2015; Chetan R)
The pair were trying to sell an ivory Ganesha that they claimed to have bought in Sri Lanka 20 years ago but were unable to provide documents of purchase nor an official declaration of possession of a controlled wildlife product.

Father turns in son for Pune temple theft (India)
(9 July 2015; Mid-day)
The father brought ornaments stolen from the Mandai Ganpati temple to the police saying his son, who has drinking and drug problems, did it.

Pune: Gold ornaments worth 50 lakh stolen from Mandai Ganesh temple (India)
(9 July 2015; The Indian Express)
The ornaments were adorning the Ganesh idol in the Sharada Ganajan Temple in Mandai. Two years ago glass was installed in this portion of the wall to allow devotees to take darshan of the idol, but grills had not been installed.

Mandai Ganpati temple gold haul: Suspect nabbed while unscrewing tap from court in Shivajinagar (India)
(10 July 2015; The Indian Express)
The man, drunk, was already a suspect in the temple theft and was caught trying to steal a tap from a home.

I followed my heart. We may be poor, but we are not criminal (India)
(11 July 2015; Pune Mirror)
The temple trust has offered to pay for rehab for the Mandai temple thief after his father turned him in.

Thieves take away antiquated idol from Dhar Rd Jain temple (India)
(9 July 2015; The Free Press Journal)
The watchman of this temple in Indore was asleep when the thieves broke in. The theft was noticed when he woke up.

Help to bring home likely stolen statue from US museum (India)
(9 July 2015; Times of India)
A Chola-era Shiva Parvathi sold by Subhash Kapoor that is in the Ball State University Museum of Art in Indiana in very likely looted. Have you seen this idol in situ?

4-member Gang Held, Gold Seized (India)
(10 July 2015; The New Indian Express)
They were found to be in possession of gold ornaments and statues from the Laxminagar temple of Papannapet mandal and also from a private house.

Swiss art dealer seeks to have assets unfrozen (Singapore)
(7 July 2015; The Strait Times)
Yves Bouvier, who is accused of fraud and money laundering related to art sales, is seeking to have his Singapore-based assets unfrozen.

Charges laid over art theft (Taiwan)
(10 July 2015; Taipei Times)
A man is charged with stealing a painting worth NT$30mil by Chen Cheng-po from a friend who refused to lend him money.

Iraq celebrates return of antiquities, appeals for world help (Iraq)
(9 July 2015; Reuters)
The 800 looted, smuggled, and recovered items were returned from various countries and were shown at the National Museum of Iraq in Baghdad.

Father enlists 4 kids to unearth `treasure’ from Second Temple period protected by `demon’ (Israel)
(9 July 2015; The Jerusalem Post)
Apparently upon arrest the father told the Antiquities Authority that a demon in the cave kept a buried treasure there that he was looking for. This is the 2nd recent looting incident at this site.