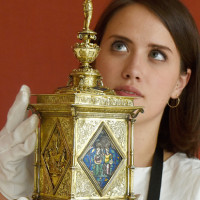 Looted treasures open door to a dark Nazi past (General)
(2 July 2015; The Australian)
Reflection on recent sales of paintings seized or force sold during WWII.

Chinese Art Professor Devoted to Ancient African Artifact Protection (Togo)
(2 July 2015; All Africa)
But is a private museum really protection? What happens when the collector dies?

Chinese visitor face charges in ancient art scam (Canada)
(29 June 2015; The Vancouver Sun)
The scam victims, who shouldn’t have been trying to buy artefacts in the first place, bought ‘gold’ items that turned out to be iron.

Midnight thief steals $160,000 sculpture from Westmount art gallery (Canada)
(30 June 2015; Montreal Gazette)
The suspect entered the gallery through the back door and grabbed the sculpture.

The Fine Art of Forgery (USA)
(29 June 2015; The Atlantic)
Use of 3D printing for artefacts may have all sorts of preservation applications. Why own the real thing?

Delaware Art Museum Completes Sale of Artworks to Repay Debt (USA)
(30 June 2015; The New York Times)
Part of the general deaccessioning controversy going on in museums. Is this a violation of public trust?

Why two American museums are fighting to keep art stolen by the Nazis (USA)
(30 June 2015; The Washington Post)
Thoughts on the controversial art in the Norton Simon and the Fred Jones Jr. Museum of Art.

British Museum’s ivory icons denied US entry for loan show (USA)
(1 July 2015; The Art Newspaper)
On the face of it, this seems to confirm the fears of those who were against the US’ new tough on ivory stance.

Feds: Artist Terry Lee Whetstone Is a Fake Indian Read more at http://indiancountrytodaymedianetwork.com/2015/07/02/feds-artist-terry-lee-whetstone-fake-indian-160941 (USA)
(2 July 2015; Indian Country Today)
It is illegal to sell art as native mad if it isn’t, but is this artist Native American? It might be complicated.

The artful dodger: Prolific forger Mark Landis gave all his counterfeit paintings away for free (USA)
(2 July 2015; City AM)
An uncomfortable story. He liked how the museums treated him.

Second World War tank and anti-aircraft gun found hidden in basement of villa in Germany (Germany)
(3 July 2015; The Telegraph)
“Some people like steam trains, others like tanks.” The villa owner is thought to be in violation of the war weapons control act.

Acto de desagravio ante el robo sacrílego en Valencia (Act of atonement against a sacrilegious robbery in Valencia; Spain)
(4 July 2015; Religión Digital)
The tabernacle was stolen from the chapel in the hospital of Arnau de Vilanova.

Museum searching for `devastated’ boy who accidentally smashed ancient jug (UK)
(29 June 2015; Metro)
The museum has reassembled the broken pot and they would like to show the boy how it was done.

Security alert after historic stone artefact stolen from church (UK)
(29 June 2015; Darlington & Stockton Times)
A portion of an 8th century carved cross was stolen from All Saints’ Church, in Hovingham.

Rare books: Foiling the thieves (UK)
(2 July 2015; The Economist)
Several cases of rare book theft and some coverage of the The Written Heritage of Mankind in Peril conference.

Paintings stolen decades ago returning to Amsterdam Museum (UK)
(2 July 2015; The NL Times)
Images of the paintings that have been recovered (note this article says 5 while the others say 6).

Missing Dutch art is discovered in Sussex (UK)
(3 July 2015; The Argus)
The six paintings (note other articles say five) were purchased for a few hundred pounds in 1991 but were found to be in the Art Loss Register, stolen from the Amsterdam Museum in 1972.

Museum hands back Renaissance riches linked to Nazi looters (UK)
(5 July 2015; The Telegraph)
The 16th century salt cellar was returned by the Ashmolean to heirs who are now selling it at Sotheby’s.

Lowry’s paintings are worth a fortune – but can you tell the real ones from the fakes? (UK)
(5 July 2015; Radio Times)
The article asserts that Lowry’s style lends itself to faking.

Indigenous man’s skull returns to his people more than 150 years after its theft (Australia)
(29 June 2015; ABC)
An interview with Alexandra Roginski, a PhD student’s work that led to the return of the stolen skull.

Hindus urge National Gallery of Australia to expedite provenance of Hindu statues (Australia)
(4 July 2015; Merinews)
Looking for a timeline for the review of the possibly illegal objects in the NGA collection so they can be returned to temples.

Art stolen from Whanganui gallery (New Zealand)
(30 June 2015; 3News)
The 5 works, ceramics by Rick Rudd, were stolen from locked cases as Whanganui prepared for a flood.

Almost a third of China’s Great Wall has disappeared (China)
(29 June 2015; The Guardian)
Over time. Not totally recently. Due to, among other things, tourist damage and theft for building materials.

Windows to the past (India)
(30 June 2015; The Indian Express)
“Before opening up the antiquities market, India needs to modernise the registration process and address its lack of institutional expertise.”

Robbery attempt at Jain temple foiled (India)
(5 July 2015; The Times of India)
The would-be thieves tripped the alarm at the ancient Parshvanath Jain temple in Bhadrawati which scared them off. This is the second recent theft attempt at that temple.

Precious artefacts get damaged, others face risk of theft during shifting (Pakistan)
(5 July 2015; Dawn)
Accusations that an unprofessional move of artefacts to a museum is leaving them open to theft.

An impossible watch heist, now on display at Jerusalem museum (Israel)
(1 July 2015; Haaretz)
An exhibition at The Islamic Museum features watches recovered after a major theft.

Isis militants destroy 2,000-year-old statue of lion at Palmyra (Syria)
(2 July 2015; The Guardian)
A confused timeline and poor reporting make it difficult to get much out of such reports.

Looted in Syria — and sold in London: the British antiques shops dealing in artefacts smuggled by Isis (Syria)
(3 July 2015; The Guardian)
Thoroughly misleading headline, none of the experts quoted said that the obviously-looted, obviously-smuggled antiquities for sale were smuggled specifically by *IS, how could you prove that? Still a good article nonetheless.