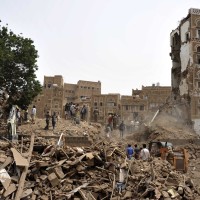 Hot this week: Loss of ‘World Heritage’ in Yemen, but curious lack of media outcry.

How provenance became sexy (General)
(12 June 2015; Visual Arts HubArtsHub)
Not much in the article but a fun headline.

The stench of scandal (General)
(14 June 2015; The Tribune)
Notes on the art world’s tendency towards scandal.

Militants Hit Karnak Temple, in 2nd Recent Attack on Egyptian Tourist Sites (Egypt)
(10 June 2015; The New York Times)
The temple was unharmed, two of the attackers were killed, and a 3rd attacker and a police officer were wounded.

Concierto en Fusagasugá terminó en ri̱as y robo a la iglesia del municipio (Fusagasugá concert ends in fights and the robbery of the local church; Colombia)
(8 June 2015; LA FM)
The tabernacle, the gold crown of the virgin, and a silver cup were among the items taken.

Roban iglesia en Maripí, Boyacá (Colombia)
(9 June 2015; El Espectador)
A reward is offered for information about the theft of a chalice and a custodia from the church at Maripí, Boyaca

Definen factores que afectan a zona arqueológica (Defining factors that have an effect on archaeological sites in Escuinapa.; Mexico)
(13 June 2015; Noreste.com)
Officials blame a lack of money and a public disregard for preservation for the constant threat to Mexican archaeological sites.

Perú recuperó 74 piezas arqueológicas que permanecían en Chile (Peru recovered 74 archaeological pieces that were in Chile; Peru)
(26 May 2015; El Comercio)
The objects were in the Villalobos collection and were determined to have been stolen from Peru.

Senators Attempt to Protect Stolen Jewish Artifacts in Iraq From ISIS (USA)
(10 June 2015; JP Updates)
A misleading title. This is only one piece of the continuing divisive saga. It seems Iraq has agreed to this delay, however.

Judge Rejects Claim for a Pissarro by Heirs in Nazi Art Case (United States of America)
(10 June 2015; The New York Times)
The painting is in the Thyssen-Bornemisza Museum in Madrid and US judge ruled that the US didn’t have jurisdiction to rule.

Libraries And Cities Are Terrible At Keeping Track of Art (United States of America)
(11 June 2015; Atlas Obscura)
The difficulties in being tasked with protecting and preserving things that are out of Libraries’ usual remit.

US House of Representatives Passes Controversial Art Protection Bill (United States of America)
(12 June 2015; Hyperallergic)
The house as passed the The Foreign Cultural Exchange Clarification Act (HR 889) which prevents art loaned by foreign governments from being seized in the US…even if they are shown to be stolen.

Divers search lake for stolen ‘Wizard of Oz’ ruby slippers (United States of America)
(12 June 2015; News 13)
Stolen from the Judy Garland Museum 10 years ago, the divers were following up on a local rumor that the shoes were dropped in a mine pit.

Living in the Past: Landowners often loot or destroy archaeological sites. Is this new subdivision a solution? (United States of America)
(12 June 2015; Slate)
This is honestly one of the strangest ideas I’ve read. Selling legal ‘looting’ plots in Colorado?

Sofia Airport customs officers foil attempt to smuggle out ancient coins in routers (Bulgaria)
(12 June 2015; The Sofia Globe)
The 82 coins date from the 4th century BC and were hidden in three routers headed to the U.S.

Intercepted ceramic artefact not from Syria (Finland)
(9 June 2015; YLE)
Also, nothing to do with ISIS. Another example of poor reporting related to all of this.

Giordano’s Düer Forgery—Too Late to Prosecute? (Germany)
(8 June 2015; ArtNet News)
1653? Then yes it is. A short thought on how authenticity is determined.

Bonhams Returns Ancient Hermes Head Illegally Smuggled Out of Greece (Greece)
(9 June 2015; Greek Reporter)
The head has been returned after Bonham’s attempted to sell it in late 2014.

Detenido el autor de un robo de piezas de plata en una parroquia de La Ribera (Perpetrator of a robbery of silver object from a parsonage in La Ribera arrested; Spain)
(9 June 2015; Burgos Conecta)
An individual was arrested when he tried to sell silver objects obviously stolen from a church to a jeweller. The 16th century pieces came from a parsonage in the village of Aranda de Duero.

Church’s stolen statue head found on ebay after two years and returned to Forest of Dean (United Kingdom)
(9 June 2015; Gloucester Citizen)
The 14th century piee was taken from All Saints Church in Newland, Forest of Dean, in 2012.

Vindolanda thieves steal face from 2,000 year-old Roman statue (United Kingdom)
(10 June 2015; Chronicle)
The piece was taken from a museum display, the first theft there in 45 years.

SA Police search for Boer War artefacts, papers stolen from State Library (Australia)
(12 June 2015; Perth Now)
More than 150 Boer War objects were taken from the State Library as long as six years ago. All of them relate to a single family with the surname White.

La vente d’art kanak suspendue (Sale of Kanak Art Suspended; New Caledonia)
(13 June 2015; Les Nouvelles Cal̩doniennes)
The auction house maintains that the collection was exhibited before without uproar but they have suspended the sale. It is unclear what will happen next.

Conmen scam HK art collector out of 1 mil euros (Hong Kong)
(10 June 2015; Ejinsight)
In the course of a brokerage deal for the sale of a Van Gogh during an absurd money counting ritual, the counters swapped fake money for real money.

Idol Pursuit: Intrepid bloggers try to retrieve stolen sacred art from around the world (India)
(12 June 2015; India Today)
An in depth look at proposed changes to Indian antiquities law. Quotes from me!

Cops crack sensational temple idol theft case (India)
(13 June 2015; The Hindu)
How the police cracked the case of a theft of an idol from Venkatagiri temple in Nellore district.

Illegal antiquities trade grows as NGA door guardians remain on display (India)
(13 June 2015; The Australian)
A wonderful feature on the work of Vijay Kumar in exposing the trafficking of Sacred Art from India

Archaeological Survey of India discovers smuggled Indian antiques in Singapore museum (Singapore)
(14 June 2015; The Indian Express)
I’m quite sure all of us have known these objects were there.

‘Cave of the Skulls’ Robbers Get Prison Term in Israel (Israel)
(9 June 2015; Live Science)
The 6 looters were given 18 months in prison.

Explosion Destroys Ancient Cultural Heritage Site in Yemen Capital (Yemen)
(12 June 2015; The New York Times)
It is as yet unclear if the destruction was due to Saudi bombing, but this is destruction of a World Heritage Site that the world isn’t panicked about. Why?