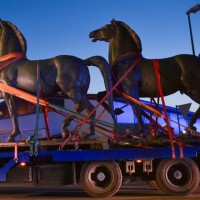 Antique coins smuggling attempt foiled by Cairo airport authorities (Egypt)
(21 June 2015; The Cairo Post)
The 5 coins were found on an Italian citizen at Cairo International Airport who was headed to London.

Owner wins his paintings back (South Africa)
(22 June 2015; IOL News)
The paintings were taken from the owner’s home by a lodger who passed them on to a dealer. The dealer has been ordered to recover them from who she sold them to and return them.

US judge halts release of massive Brazilian emerald (Brazil)
(26 June 2015; The Sydney Morning Herald)
In the continuing saga of the smuggled 362-kilo Bahia Emerald, a US federal judge has just halted it’s return saying it would be subject to forfeiture in Brazil.

Ukraine community seeks return of cultural artifact (Canada)
(22 June 2015; Timmins Press)
An aluminium representation of a Kobzar used to adorn the entrance to a park, now the Ukrainian community in Timmins is seeking its return.

Capturan a ladrón de iglesias en la ciudad de Durango (Church thief arrested in the city of Durango; Mexico)
(24 June 2015; UnoTV)
The man is accused of committing 11 recent church robberies. Among the various sound equipment stolen, was a chalice for the Eucharist.

Hallan 14 tumbas pertenecientes a culturas Mochica, Chimú y Lambayeque (14 tombs of the Moche, Chimu, and Lambayeque cultures found; Peru)
(27 June 2015; Andina)
The 14 new tombs were found in an area that was looted 10 years ago. Archaeologist Walter Alva says they are working so that won’t happen again.

Here’s What Happens When Some Yale Bro Steals Your Art (USA)
(24 June 2015; The Muse)
When is ‘sampling’ other artists’ work just theft? When is it part of a pattern of systematic art world sexism?

New York Prison Escapee Traded Art for Favors From a Guard (USA)
(25 June 2015; The New York Times)
The guard gave the incarcerated and now escaped artist a screwdriver and pliers in exchange for paintings.

Report: US museums increasingly evading restitution of Nazi-looted art through legal tactics (USA)
(25 June 2015; Star Tribune)
The report cites several cases, none of which are quite as cut and dry as the article makes them out to be.

From Pollock to Rothko, How to Spot a Fake (USA)
(26 June 2015; Barrons)
Materials analysis to determine if paintings are fakes.

Nazi-looted painting from Munich fetches close to $3m (Germany)
(24 June 2015; The Times of Israel)
It was one of the pieces found in the “Gurlitt hoard”

Did an Auction of Hitler’s Art Go Too Far? (Germany)
(25 June 2015; Smithsonian)
An ethical question, not really a legal one.

Robos de patrimonio en España: ¿Quién está detrás de ellos? ¿Cómo funciona el mercado negro? (Theft of heritage in Spain: Who is behind this? How does the black market function?; Spain)
(21 June 2015; Huffington Post)
Questions about the wave of church architectural element theft that seems to be hitting parts of Spain.

Art dealer admits selling fake paintings (UK)
(25 June 2015; The Guardian)
The St Ives dealer bought the paintings from imitation websites and passed them off as real Wallis and Brett works.

Holy Grail found (thanks to Crimewatch appeal) (UK)
(26 June 2015; The Telegraph)
Police have recovered the stolen Nanteos Cup after it was anonymously returned after a Crimewatch feature. It is said to have been brought to Glastonbury by Joseph of Aramathea.

Chhatisa Nijog alleges theft of daru pieces, Debands action on Daitas (India)
(22 June 2015; Odisha Sun Times)
Allegations of mismanagement in the Ghata parivartan ritual of the Lords include accusation that pieces of daru were stolen from Shree Jagannath temple.

Gods safe as govt ups security at temples (India)
(24 June 2015; Bangalore Mirror)
Because of repeated thefts, there will be an increase in security at the temples of Karnataka.

Panchaloha idols stolen from cave temple (India)
(25 June 2015; The Hindu)
The idols, identified as Chandrasekarar and Marakatha Kanni, “were stolen from the ancient cave temple in Seeyamangalam village near Desur”.

Tiruvannamalai Temple Gets Centuries-old Panchaloha Idols Back (India)
(27 June 2015; The Indian Express)
The idols were stolen from the six-century-old Athi Kesava Perumal temple in a village in Tiruvannamalai district and were recovered by the Idols Wing in a big arrest and seizure.

Iran, Syria sign security cooperation MoU (Iran)
(22 June 2015; Kuwait News Agency)
This one is interesting: Iran and the Assad government have signed the MOU which includes ‘cooperation against stealing of antiquities’.

Another Treasure Lost in Iraq: The Story of Mar Behnam Monastery (Iraq)
(23 June 2015; Hyperallergic)
An important article by Christopher Jones lamenting the loss of a heritage site that, while destroyed by IS, gets no press.

Artist Who Got Turkish President Fined Now Facing Four Years in Jail (Turkey)
(25 June 2015; Hyperallergic)
Sculptor Mehmet Aksoy was able to have President Erdoğan fined for calling his sculpture a monstrosity but now he faces jail for insulting the president.

Stolen manuscripts returned to Turkey (Turkey)
(25 June 2015; Daily Sabah)
The Arabic manuscripts were stolen from the Konya Yusuf Agha Library 15 years ago. They were found in the collection of the University of Pennsylvania.