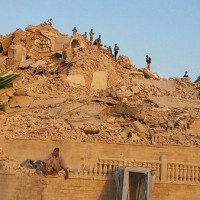 Hot this week: The UK to finally ratify the Hague Convention.

What Happens to Stolen Art After a Heist? (General)
(15 June 2015; Bloomberg)
A general piece on art theft

Unique stolen ancient Egyptian statue to return from Germany soon (Egypt)
(14 June 2015; Ahram Online)
The piece was excavated in 2008 in Aswan but in 2013 the galleries in which it was stored were looted.

University Of Ibadan Raided By Robbers (Nigeria)
(21 June 2015; Naij)
The info coming from a speech at a postgraduate ceremony, it appears as if an artefact has been stolen from the Uni’s African Studies Department.

Obras de arte de ex-dono do Banco Santos são trazidas de volta ao Brasil (Art belonging to ex owner of Banco Santos returned to Brazil; Brazil)
(18 June 2015; Globo)
The US has returned two artwork to Brazil. The Basquiat piece, worth millions, was brought into the US with paperwork saying it was worth $100, thus illegally and a clear case of money laundering.

Sufre Tamaulipas saqueo arqueológico (Mexico)
(15 June 2015; La Verdad de Tamaulipas)
Despite the title, this is a piece about a museum in Tamaulipas that houses fossils and tries to prevent fossil looting.

Human skeletons missing from museum discovered in Atherton backyard (USA)
(12 June 2015; KTVU)
A convoluted case. What seems to be fairly sure is that someone, perhaps a museum, had Native American remains when they shouldn’t have.

NY State Senate Passes Bill Protecting Art Authenticators from Bogus Lawsuits (USA)
(16 June 2015; Hyperallergic)
In an effort to stop a trend of suits against authenticators who declare art to be forgeries, Act S1229A says that only “valid, verifiable claims” can go on to court.

`Opportunist’ posed as apartment employee to steal $40K painting (USA)
(16 June 2015; New York Post)
The artwork was being returned to the owner via Fed Ex and the thief intercepted it, telling the delivery person he was the superintendent.

Maintenance Worker Accidentally Trashes Sculpture at Outdoor Art Show (USA)
(19 June 2015; ArtNet News)
The piece by Jim Osman, installed in Madison, Connecticut, was dismantled by a maintenance worker who thought it was left by skateboarders.

`Intent to Deceive: Fakes and Forgeries in the Art World’ at Reading museum (USA)
(20 June 2015; The Mercury)
An exhibition about forgery at the Reading Public Museum, Pennsylvania.

Questions over authenticity of Russborough painting (Ireland)
(16 June 2015; The Irish Times)
It appears to have been rejected by Christie’s. Is it a fake?

Police recover painting looted by Nazis (Italy)
(19 June 2015; ANSA)
The painting was recovered from an auction house in Milan. It was part of the collection of the National Museum of Wroclaw.

Pretendía vender por Internet 187 piezas arqueológicas (Attempt to sell 187 archaeological objects on the internet; Spain)
(17 June 2015; La Opinión de Murcia)
The Guardia Civil of Murcia, as part of a special investigation, has recovered 187 archaeological and paleontological pieces that were being illegally sold online.

United States Returns Stolen Antique Books to the National Library of Sweden (Sweden)
(17 June 2015; FBI)
The two books are part of a group of 56 books taken by a former employee between 1995 and 2004 and consigned to a German auction house.

Diver Pleads Guilty to Fraud Involving Historic Cannons (UK)
(15 June 2015; Marine Link)
The diver claimed he found historic cannon outside of territorial waters, however an investigation has shown that he lied and they were, in fact, property of the Crown.

New Documentary Hopes To Shed Light On Banksy Artwork Heist (UK)
(18 June 2015; Artlyst)
The 10-foot statue “The Drinker” was erected in 2004 and stolen by a group called Art Kieda who are the subject of the film “The Banksy Job”.

UK to adopt Hague Convention to protect artefacts in war zones (UK)
(21 June 2015; BBC News)
The UK signed it but never ratified it.

Queensland Art Gallery may have to return stolen antiquities (Australia)
(19 June 2015; The Australian)
All five bronzes were acquired in the past 4 years, despite the scandal surrounding Indian art in Australia.
Rannali ‘stoked’ painting found 12 years later (New Zealand)
(16 June 2015; Bay of Plenty Times)
The painting was stolen from its original owners 12 years ago and was handed in to the police by someone concerned about its origins.

The Chinese Want Their Art Back (China)
(20 June 2015; The New York Times)
By the legendary Karl E. Meyer. The combo of China’s buying power and desire to recover stolen antiquities.

Stolen ‘ashtadhatu’ idols of Mahavira recovered in Bihar (India)
(17 June 2015; Z News)
The police have arrested one individual in conjunction with the theft of three idols of Lord Mahavira stolen from a Jain temple in Kishanganj district of Bihar.

Silver valuables stolen from Uppinangady temple found beneath channel (India)
(17 June 2015; Daijiworld)
The silver items were stolen from Lord Laxmi Venkataramana Temple in Uppinangady and were found hidden below a water channel.

Committee to dig into allegations of fraud at Archaeology Dept (Sri Lanka)
(21 June 2015; News First)
The State Minister of Culture and Arts has received a number of complaints that artefacts have been ‘stolen or misplaced’ by archaeologists.

Arsonists torch storerooms with 4,000-year-old artifacts (Israel)
(16 June 2015; The Times of Israel)
What seems to be an intentional fire hit a storage area for antiquities recovered during a salvage excavation near Tel Kishon.

Fire damages landmark Christian site in Israel (Israel)
(18 June 2015; Los Angeles Times)
Several rooms of the Church of the Multiplication of Loaves and Fishes at Tabgha were destroyed in what seems to be part of a string of crimes targeting non-Jewish sites.

Statue of Virgin Mary Restored to Syria’s Maaloula (Syria)
(14 June 2015; Almanar News)
The objects were taken sometime after 2013 and have been returned.

Historical carpet lost at museum (Turkey)
(15 June 2015; Hurriyet Daily News)
The 89 year old carpet left the Atatürk Museum during restorations and has not come back. Unclear what has happened.

Yemen: the Unesco heritage slowly being destroyed (Yemen)
(16 June 2015; The Telegraph)
Old Sana’a, the World Heritage Site that IS being destroyed and that no one is having a fit about.