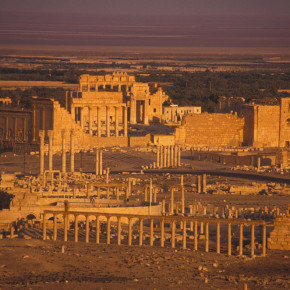 Hot this week: Parthenon sculpture, in court or out?

James Cuno on Museums: The Case Against Repatriating Museum Artifacts
(11 May 2015; Foreign Affairs)
James Cuno continues to argue that (Western) museums should be beyond the law and not be required to return stolen property. Thankfully the law of everywhere disagrees with him.

Plunder of cultural heritage `war crime’: UNESCO director at Cairo conf
(13 May 2015; The Cairo Posti)
Reporting on the “Culture under threat: the security, economic and cultural impact of antiquities theft in the Middle East” conference.

After theft, Argentines donate prized possessions, wedding rings for new monstrance
(13 May 2015; Catholic News Agency)
After the theft of 2 monstrances from the Museum of Sacred Art in 2011, people in Tucuman have been donating gold and silver to forge new ones.

40 cámaras, oficiales y vidrio especial protegen a La Negrita (Costa Rica)
(13 May 2015; Entorno Inteligente)
Because of the threat of theft, new security has been put in place in the Basilica of Cartago to protect the patron saint of Costa Rica.

Saquean zona arqueológica en Cucurpe (Mexico)
(16 May 2015; El Diario de Sonora)
Ancient footprints at the site of Cucurpe are being cut out of the ground and stolen. Mastodon bones have been stolen from the area in the past.

Brooklyn reclaims wolf heads stolen from Israel Putnam statue 30 years ago (United States)
(9 May 2015; Norwich Bulletin)
Taken in the mid 1980s, the wolf heads were tracked down to a recent auction where they were recovered.

Missing 13th-Century Painting to be Returned to Owners in Court Settlement (United States)
(12 May 2015; New York Times)
The 13th century painting went missing from a Geneva vault in 1986 and turned up for sale at Sotheby’s New York in 2014. It was flagged by Art Recovery Group.

Gardner Museum announces reward for single item stolen in heist (United States)
(12 May 2015; Boston Globe)
The reward is for the gilded eagle finial. Why? Because it is the most likely piece to be sitting unrecognized in someone’s collection.

University releases statement on stolen art (United States)
(14 May 2015; The Oklahoma Daily)
The super lawyered statement about a painting stolen from a Jewish family during WWII that is now in the Fred Jones Museum of Art, is pretty snarky and probably doesn’t help anyone.

The Treasure Debate (Cyprus)
(17 May 2015; Cyprus Mail)
Amendments to the law made in 2012 severely limit where metal detectorists can detect so, naturally, they hate that.

Picasso stepdaughter accuses Paris dealer of stealing artist’s works (France)
(12 May 2015; The Telegraph)
Catherine Hutin-Blay says the dealer stole paintings that he was transporting on her behalf.

Art Forger freed and making millions (Germany)
(10 May 2015; BBC News)
Wolfgang Beltracchi has been doing pretty well with his art forgery deal now that he is out of prison.

Giacometti Forgery: Art Dealers Stand Trial (Germany)
(11 May 2015; )
Concerning a court case against a German ring accused of attempting to put a fake Giacometti on the market.

Two Nazi-Looted Paintings Set for Return to Heirs of Original Owners
(12 May 2015; Wall Street Journal)
A Matisse and a Liebermann from the Gurlitt hoard to go back to heirs.

Matisse painting from Gurlitt’s Nazi-looted art collection returned to owners
(15 May 2015; DW)
The heirs of Paul Rosenburg have received their Matisse.

Elgin Marbles: Greece should take UK to court over sculptures, claim human rights lawyers
(12 May 2015; Independent)
This article is, of course, contradicted by other Parthenon sculptures articles.

Greece drops option of legal action in British Museum Parthenon marbles row
(13 May 2015; The Guardian)
This is coming from the Greek cultural minister Nikos Xydakis.

Greece snubs Amal Clooney over Elgin Marbles
(14 May 2015; Telegraph)
Another article reporting Greece’s decision not to seek the Parthenon sculptures via the courts.

Priceless Raphael painting damaged by humidity as Italian museum fails to repair broken air-conditioning system (Italy)
(14 May 2015; Telegraph)
‘The Deposition’ (1507) is a serious risk of Borghese Gallery does not fix their climate control system as it is on a wood panel. Reports that paintings are warping.

Un español ocultaba en Tenerife arte sacro robado en iglesias suecas (Spain)
(11 May 2015; El País)
The Spaniard has already been sentenced to 5 years in Sweden for the thefts and around 50 items were recovered in the Canary Islands and Madrid.

A Swiss Merchant of Death’s Nazi Friends and Suspicious Masterpieces
(17 May 2015; Daily Beast)
An article about Emil Georg Bührle.

Challenge for Bamber Gascoigne as thieves steal valuable auction items (UK)
(12 May 2015; The Telegraph)
The TV presenter was planning on selling the 18th century lead Mercury to fund restorations to his Grade I listed building.

US Museum Returns Hanuman Statue to Cambodia
(11 May 2015; The Cambodia Daily)
After a long slog, the Cleveland Museum of Art has returned the Koh Ker Hanuman, the 6th looted statue from that temple to be returned.

It’s official: Cleveland Museum of Art returns Hanuman statue to Cambodia (photos)
(12 May 2015; Cleveland.com)
No new info on the story but nice photos.

Returning Hanuman sculpture to Cambodia a nimble, savvy play by Cleveland Museum of Art
(15 May 2015; Cleveland.com)
The opinion piece argues that the antiquities buying world is a murky place and it was the right move for the museum to just return the stolen statue. It brings up the museums more recent questionable antiquities buys.

Beijing’s Old Summer Palace Replica Controversially Built As History Lesson For Young Generation
(11 May 2015; International Business Times)
A full scale replica of the looted and destroyed Yuanmingyuan has been built in Dongyang, but does this trivialize the past destruction?

Precious idols stolen from Jain temple (India)
(13 May 2015; Business Standard)
Three idols were stolen from the Digambar Jain temple in Kishanganj after the gate was forced.

Maheshwar Jain temple theft: four arrested, two absconded (India)
(14 May 2015; Naidunia)
Four of the six people accused of stealing statues from a Jain Temple in Maheshwar have been arrested.

Four panchaloha idols stolen from temple  (India)
(14 May 2015; Business Standard)
The four statues, along with money from an offering box, were taken from a temple in Kaundampalaya, Coimbatore.

Two antique idols seized in Tuticorin (India)
(14 May 2015; The Hindu)
The stolen idles were declared as coconuts on the shipping bill and were being shipped to the UAE.

Ancient idols worth Rs 77cr being smuggled out seized in Chennai (India)
(15 May 2015; Times of India)
Nine idols were seized in the international market in Mambalam and a Tamil film producer was arrested. Apparently they were headed to Singapore.

Statues worth RM50,000 stolen from temple (Malaysia)
(16 May 2015; The Star)
Following a festival, 15 statues made of impon were stolen from the Sri Karumariamman Temple in Mambau, Negri Sembilan.

Iraq says ISIS demolishes ruins to cover up looting operations
(12 May 2015; Asharq Al-Aswat)
This is from Qais Hussein Rashid, head of Iraq’s State Board for Antiquities and Heritage, but is a little hard to believe as it stands. There would be no motivation to ‘cover up’ looting.

Israeli Antiquities Squad Stops Wannabe’ `Tomb Raiders’ at Ancient Roman Catacomb
(10 May 2015; Jewish Press)
The task force stopped a looting in the act at a Roman/Byzantine site in the upper Galilee.

ISIS Advance in Syria Endangers Ancient Ruins at Palmyra
(14 May 2015; New York Times)
More reports of potential destruction from the region. Reporting on this has been spotty. This seems one of the better pieces.

Isis pulls back from Palmyra but fear of ‘cultural atrocity’ remains
(15 May 2015; The Guardian)
Militants appear to have pulled back to about 2 miles from Palmyra.

Mosaics in Turkey’s south were not `botched,’ says restorer
(14 May 2015; Hurriyet Daily News)
After a media storm, the restorer of the mosaics in the Hatay Archaeology Museum argues that the shocking photos were taken during an initial phase of restoration, not the end product.

Antiquities draft law to be debated (UAE)
(16 May 2015; Gulf News)
The new laws are meant to halt looting and illicit antiquities sales across all emirates.