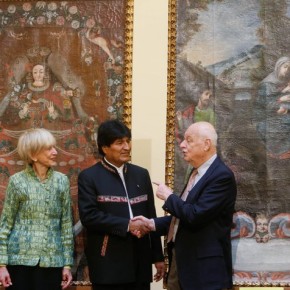 Hot this week: Destruction at Nimrud

Note: I’ll be at the Society for American Archaeology Meeting in San Francisco for the rest of this week and then in Yucatán and Quintana Roo until the first week of May on fieldwork. I’ll try to get Culture Crime News out during that time but my internet access may be limited. At the very least, Culture Crime News will be back mid-May.

Beyond the Woman In Gold: On the hunt for the Nazis’ looted art
(10 April 2015; Ham & High)
General discussion of restitution with Joanna Deakin of the Commission for Looted Art.

Why We Have a Civic Responsibility to Protect Cultural Treasures During Wartime
(10 April 2015; Smithsonian)
Brief mention of heritage destruction in conflict in various parts of the world.

Meidum Geese painting authentic: Zahi Hawass
(9 April 2015; Cairo Post)
Hawass says that Egyptologist Francesco Tiradritti’s allegations that the Meidum Geese are fake have no merit. He also said that Tiradritti “should have discussed his conclusions with Egypt’s Ministry of Antiquities before making them public.”

Opinion: You cannot police research
(10 April 2015; The Cairo Post)
Fake or not, Monica Hanna asserts that the state should not be so hostile to academic and scientific research.

Don’t break the law in statue battle – Mthethwa
(8 April 2015; News 24)
After a wave of vandalism directed at statues and memorials to various South African colonials, the Arts and Culture Minister urges everyone to not break the law, rather decide the fate of the statues via public dialogue.

Authorities in Tanzania struggle to save historical monuments from harm
(11 April 2015; Spy Ghana)
Metal theft has become a major problem in Arusha with monuments and plaques being targeted.

New York couple returns stolen Andean paintings to Bolivia
(9 April 2015; U-T San Diego)
The paintings were bought in Brazil 12 years ago by a collectors who didn’t check a stolen art database until a museum required them to.

Buscan recuperar más de 50.000 piezas de arte
(11 April 2015; Opinión)
In wake of the return of two paintings stolen from a Potosí church, the Minister of Culture again announced that they will be seeking the return of around 50k Bolivian heritage items in foreign countries.

Vigilan templos por robos sacros
(2 April 2015; Noticias Net)
The Church of Saints Cosmas and Damian in Oaxaca, Mexico has installed security cameras to prevent the theft of sacred art. The Public Security Ministry of Oaxaca will be adding cameras to at least 23 churches after 170 thefts in 8 years.

Museum president fears for prized statue… It may be sold as scrap metal
(8 April 2015; Trinidad and Tobago Guardian)
A very heavy statue of General Francis de Miranda was stolen from the Chaguaramas Military History and Aviation Museum. There is a fear that the statue will be melted down for scrap. The museum was also robbed of other items in 2013.

Anonymous tip leads to stolen museum statue
(10 April 2015; Trinidad and Tobago Guardian)
The statue of Francisco de Miranda that was stolen on 7 April from the Chaguaramas Military and Aviation Museum was recovered along a roadside following an anonymous tip. Repair will be costly.

Museums Begin Returning Artifacts to India in Response to Investigation
(7 April 2015; New York Times)
The slow but steady crumbling of the don’t-ask culture around the acquisition of South Asian antiquities in response to Kapoor.

Primitive rock shelter vandalized in Nine Mile Canyon
(8 April 2015; Deseret News)
Shameful use of ‘primitive’ in title aside. The vandals buried cables and moved artefacts around at the rock shelter in Utah. Authorities are baffled as to why.

Should There be a Statute of Limitations on Nazi-Looted Art?
(8 April 2015; Hyperallergic)
This article explores that question based of a statement made in favour of limitation by Klaus Albrecht Schröder of the Albertina Museum in Vienna.

Ireland ‘letting pirates loot shipwreck RMS Lusitania’
(7 April 2015; Belfast Telegraph)
A man named Gregg Bemis actually owns the wreck which he bought in the 1960s. He is upset that people are diving at the site illegally while he is not allowed to have people dive and recover items from it.

Science Is Still Identifying The Paintings Of The Most Famous Art Forger
(9 April 2015; io9)
Still dealing with Van Meegeren’s Vermeers.

Fabergé Egg Thief Pleads Guilty In London Courtroom
(6 April 2015; Artlyst)
Richard Tobin of Glasgow stole £800k worth of Fabergé items from Christies in December 2014. He apparently is no longer claiming to be Lee Harvey Oswald.

Fabergé thief who flogged antiques worth £700k for just £100 is jailed
(8 April 2015; Telegraph)
After having pleaded guilty to the theft of Fabergé items from Christie’s London in 2014, Richard Tobin was sentenced to 28 months in jail.

Kim Roberts, who stole Picasso sketch and antiques and art from Countess Bathurst, faces jail
(9 April 2015; Gloucestershire Echo)
Roberts was working as the countess’ personal assistant when she stole the antiques and art. She has pleaded guilty.

Egypt urged to expedite efforts to keep Sekhemka statue on display
(11 April 2015; Ahram Online)
The Save Sekhemka Action Group is urging Egypt to get involved as they’d rather see the object go to Egypt than to a private collector.

How Alan Turing’s secret notebook could disappear forever
(11 April 2015; Telegraph)
The problem with private collecting of heritage items as exemplified by the sale of a Turing notebook.

Ancient artefacts from Egypt illegally imported to Australia returned to ambassador in Canberra
(8 April 2015; ABC)
The items were seized at an auction house and the general implication is they left Egypt post 2011.

One held for Bangalore temple theft
(7 April 2015; Times of India)
The Valsad rural police arrested a person for a theft at Shri Shankeshwar temple, Bangalore, and recovered two ashtadhatu idols of Lord Mahavir, a crown, and some other ornaments. The accused said he had three other accomplices.

India’s deafening silence on stolen art
(10 April 2015; The Hindu)
Desai asks if Indian objects are better off in western museums. I disagree with both the premise and the details.

Lost Yi Sun-shin book found in museum
(6 April 2015; Korea Times)
The book is about Admiral Yi Sun-shin (1545-1598) and has been missing since the 1920s. As it turns out, it is sitting in South Korea’s National Maritime Museum.

Hue bringing home royal rickshaw from France, hopes to retrieve plundered relics
(8 April 2015; Thanh Nien News)
Even though Vietnam paid for the return of the royal rickshaw there is increased hope that they will be able to recover more cultural objects that were lost during times of occupation and invasion.

A War Zone’s Ancient Past at Stake
(5 April 2015; New York Times)
A short editorial in support of various efforts to safeguard heritage in Iraq and Syria.

A Struggle to Secure Iraq’s Shared Past, and Perhaps Its Future
(9 April 2015; New York Times)
Discussing the protection of heritage with various professionals and the general public in Iraq.

Islamic State video shows destruction of ancient Assyrian city of Nimrud
(12 April 2015; ABC)
Over a month after rumours, this video is out. It is unclear when the footage was shot. They used explosives on the site.

Egyptian Artifacts Salvaged from Robbed Tomb in Israel
(1 April 2015; Live Science)
The Israel Antiquities Authority found pickaxes and other looting evidence at cave near Kibbutz Lahav. They were able to locate a number of artefacts that the looters missed.