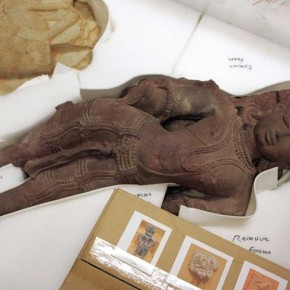 Hot this week: Lots of looted Indian and Nepali stuff exposed in USA

The last prisoners of war: Inside the battle to recover Nazi-stolen artwork
(1 April 2015; MSNBC)
Nothing new here, just a general run down of a few cases as part of the Woman in Gold hype.

Thousands of artifacts stolen by John Tillmann going home (Canada)
(31 March 2015; The Chronicle Herald)
Tillmann was sentenced to nine years in 2013 and returning all of the stolen material he had has been difficult.

FBI: No, the Gardner Museum Heist Hasn’t Been Solved
(31 March 2015; BostInno)
Has to be said after poor reporting on the part of Breitbart (expected) and ArtInfo who picked up the false story.

Antiquities looted from India end up at Honolulu museum
(1 April 2015; Houston Chronicle)
The Honolulu Museum of Art has handed over seven artefacts which they bought from disgraced dealer Subhash Kapoor so they were likely stolen from India. Said the museum: Could we have done a better job? Sure,” he said. “Were we a victim? Yes.”

California museum must face lawsuit over art looted by Nazis
(2 April 2015; Reuters)
Sorry Norton Simon, as the judge said: “Stolen property remains stolen property, no matter how many years have transpired from the date of the theft”.

Brooklyn Art Dealer Accused of Selling Stolen Ancient Artifacts for $500K
(2 April 2015; DNA Info)
More detail on the Nayef Homsi charges. The sales occurred in 2012 and 2013 and at least one of the pieces was stolen from the Itum Bahal Temple in Kathmandu in 1983 and Homsi apparently said he was too nervous to search the Art Loss Register.

Germany says Pissarro painting from Gurlitt trove to be returned
(1 April 2015; Yahoo News)
‘La Seine vue du Pont-Neuf, au fond le Louvre’ was determined to be looted during WW2 and will be returned to heirs.

Court sits at British Museum for first time as judge studies looted Libyan sculpture
(30 March 2015; Telegraph)
Everyone went to the BM to see the statue which experts displayed had clear signs of being recently excavated.

RJ Mitchell cigarette case returned to Solent Sky Museum (UK)
(4 April 2015; BBC News)
The case belongs to the designer of the Spitfire and was stolen last month. Returned inside a padded postal bag.

Chinese villagers write to Dutch PM for return of mummified buddha
(29 March 2015; Shanghai Daily)
The letter was written jointly by the residents of Datian County in Fuijan and overseas supporters.

Stolen artefacts: Relics of plunder (China)
(4 April 2015; The Economist)
A short piece about the stolen mummy-in-a-statue. It credits Lin Yongtun of Yangchun with making the ID of the stolen piece.

Bangalore earning notoriety as market for antique idols
(30 March 2015; The Hindu)
A short article about the stolen idol market in Bangalore with a few cases listed.

Use Force to Stop ISIS’ Destruction of Art and History
(3 April 2015; New York Times)
By Hugh Eakin. I will say again, we kill and die to protect lives and that should come first. No one should be sent to die for archaeology. No one should kill for it.

Watch: Historic Jewish text from Prague stolen years ago found in Israel
(4 April 2015; Jerusalem Post)
The book, a record of a Prague Jewish Community, was stolen from a synagog inside a Jewish museum in 2007. It was found in a private home in Petah Tikva. Arrests were made.

In Syria, National Museum of Damascus races to save antiquities from looting, damage
(30 March 2015; Art Daily)
Basically they are trying not to be another 2003 Baghdad Museum though, of course, museum workers there prepared too.