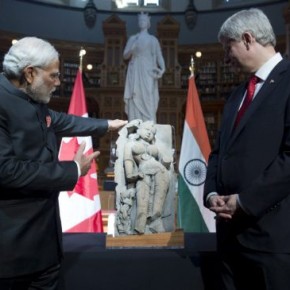 Hot this week: Indian sculpture heading back from Canada

One again, I am on fieldwork in Mexico so there may or may not be a Culture Crime News next week.

Opinion: More than naked eye needed to rule on authenticity of Meidum Geese
(12 April 2015; Cairo Post)
More experts weighing in on the possibility of this painting being a fake.

Stephen Harper returns India’s lost “Parrot Lady” sculpture to Modi
(16 April 2015; The Star)
The piece was seized in Canada in 2011 but it is unsure exactly where in India it was looted from but it may be from Khajuraho.

Denuncian saqueo de vestigios arqueologicos en “Noqhla”
(16 April 2015; E-Consulta)
The site has been looted on at least two occasions. Archaeologists have asked locals to monitor the site but have no money to pay for guards.

Mummy found in front of the archaeological complex of Chan Chan
(14 April 2015; Peru This Week)
The mummy was found by cleaners in a box by the side of the road near the site of Chan Chan. It is presumed looted and dumped.

600-year-old geoglyph destroyed in Trujillo
(16 April 2015; Peru This Week)
Agricultural invaders intentionally destroyed the geoglyph as they want to open the land up for farming.

Return of smuggled antiquities wins museum praise
(13 April 2015; The Star)
Any museum holding anything from Subhash Kapoor would be wise to just send it back to India now and be on the ‘good’ side of these recent returns.

Americans with illegal Iraq War souvenirs go unprosecuted
(17 April 2015; KTAR News)
There have allegedly been no prosecution of those who took spoils from Hussein’s palaces except in firearms cases.

The Tallest Trophy
(20 April 2015; The New Yorker)
A great long read about the star-studded trafficking of a totem pole.

St Andrew mosaic “a world symbol of looted heritage”
(16 April 2015; Cyprus Mail)
Tasoula Hadjitofi spoke about the mosaic’s theft at a conference at the Victoria and Albert Museum.

http://www.washingtonpost.com/news/morning-mix/wp/2015/04/17/5-4-million-smash-and-grab-jewel-heist-reported-in-paris-tunnel/
(17 April 2015; Washington Post)
The jewels belonged to an art collector who was on her way to lend them to the Paris Museum of Modern Art, but the museum claims they weren’t expecting to receive the jewels.

Missing: Unique 150-year-old piece of London?s history
(12 April 2015; Get West London)
The Grade II listed porter’s rest which has been in Piccadilly since 1861 appears to not be there anymore. A historian thinks the council removed it, the council thinks it was stolen.

Christie’s artefacts linked to organised crime
(13 April 2015; The Scotsman)
With a quote from yours truly and several from my colleague.

Conrad Shawcross hopes new sculpture is theft-proof
(16 April 2015; BBC News)
The sculpture, made of cheap metal, replaces one that was stolen presumably by metal thieves.

Gallipoli medals stolen in post
(13 April 2015; Stuff.co.nz)
The medals were stolen from a post parcel while being sent from Australia to New Zealand. They were on their way, it seems, to the soldier’s family.

Major US Seizure Included Cambodian Artifacts
(16 April 2015; Cambodia Daily)
When we talk Kapoor loot, we usually talk India. Some of his material came from other Asian countries including Cambodia.

Rakhigarhi site being plundered due to lack of protection
(16 April 2015; The Tribune)
The Indus Valley Civilisation site is poorly protected and being encroached upon. Villagers told reporters that the artefacts found at the site have been sold by antiquities gangs, sometimes to tourists

No one to rescue Lord Krishna from police station
(16 April 2015; Times of India)
An important statue of Lord Krishna is locked in the Aung police station. It was stolen on 5 April and found buried in the field but no one in the village it came from has moved in court to claim it as they fear a prohibitively expensive surety bond.

IS looting provokes call for global response
(17 April 2015; BBC News)
Quotes from some top researchers on the topic.

Cleveland Museum of Art says it is discussing allegedly looted Hanuman sculpture with the Cambodian government
(16 April 2015; The Plain Dealer)
They still won’t comment on if the talks include repatriation or even if the statue is looted. It is looted.