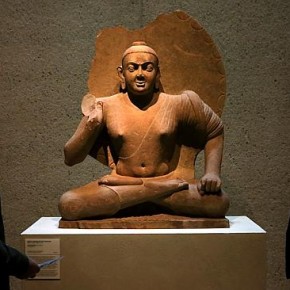 Illegal excavation, theft attempt of a 3,300 statue thwarted in Sohag’s Akhmim (Egypt)
(5 March 2015; The Cairo Post)
The lower half of a statue which had been illegally excavated was found by police in Akhmim town. The statue was found during building works, which have been suspended, and partially hidden.

INAH, contra campesinos (INAH against campesinos; Mexico)
(1 March 2015; Diario de Quintana Roo)
Representatives from the INAH say that there have not been any recent reports of looting in the state, rather that small farming is threatening archaeological sites. This news outlet, I warn, if VERY anti INAH for some reason.

Construyen casas con piedras arqueológicas: BRUTAL SAQUEO (Mexico)
(2 March 2015; El Mañana de Valles)
Poor families in a number of communities in La Huasteca have been ‘looting’ stone from various archaeological sites to build houses. The article then blames the INAH for not protecting sites,although the failure is actually in access to affordable housing materials for poor families, not site protection.

Bronze Sculpture Recovered After 32 Years to Display at ADAA’s Art Show (USA)
(2 March 2015; Observer)
The two sculptures were stolen from the Hirschl & Adler Gallery, NYC, in 1983. They have resurfaced after a private collector who held them for 30 years consigned them for sale and the claim was discovered.

Theft Suspected as Oscar Murillo Painting Goes Missing from MoMA
(6 March 2015; ArtNet News)
The museum hasn’t said anything yet but the touchable canvass displayed on the floor appears to be missing. The wall lists 8 but there are currently 7. This doesn’t mean it was stolen. We’ll see.

Mystery of the Murillo Artwork That Vanished at MoMA
(8 March 2015; New York Times)
The MoMA clarifies the Murillo situation. Yes someone took it but that person was identified and the canvass was returned.

Mysterious Apopka sculptures may be 1,000 years old (USA)
(8 March 2015; Kansas City Star)
Dug up on the grounds of a Florida museum in 2005, are these Indonesian sculptures stolen? Do you recognize them?

Austria Rules Against Restituting Klimt’s Beethoven Frieze to Heirs
(6 March 2015; ArtNet News)
A restitution board has determined that the Klimt work should not go back to heirs of Jewish collector August Lederer. It was returned to Lederer’s son after WWII but he was not allowed to export it and the family argues he was effectively forced to sell the piece to the state in 1972 at a reduced price. The museum says the son negotiated the price.

Rare objects stolen from Fontainebleau palace’s Chinese museum (France)
(1 March 2015; Reuters)
The 7 pieces were stolen on Sunday morning in a very secure part of the palace in a burglary that only took seven minutes. The artefacts were from China and Thailand and have been collected by the Empress Eugenie.

Siamese crown stolen from museum (France)
(2 March 2015; Bangkok Post)
Among the items stolen from the Fontainebleau palace was the replica crown of the King of Siam presented to Napoleon III in 1861.

French court says has jurisdiction in case over Gustave Courbet painting on Facebook
(7 March 2015; Art Daily)
A teacher posted L’origine du monde ( Courbet, 1866) on Facebook and was banned from the site for it. The legal issue was if he could sue Facebook for the banning in France. France ruled that he can.

German pensioner needs drill to dig for Nazi-looted Amber Room
(3 March 2015; Reuters)
Sigh. This is news, eh? The 68-year-old claims there is a hidden chamber under Wuppertal but, gosh darn it, he needs a drill to get to it. In the chamber? The Amber Room.

Gold Cauldron Found in Lake Attributed to Nazi Goldsmith Otto Gahr Sparks Lawsuit
(6 March 2015; ArtNet News)
Gosh this one is a mess. The piece was found in Lake Chiemse and was said to be an ancient piece when it was sold in 2014 to a man who brought it to Texas. It actually is more likely a Nazi-era piece, but the real issue is that there is a dispute over if ownership rights were granted to the person who asserted it was ancient and the buyer is suing him for fraud…

Mystery mogul funds race to reclaim lost ‘marbles’
(Greece)
(5 March 2015; Trade Winds)
The London Times says a Greek shipping mogul is paying for Amal Clooney to lawyer for the return of the Parthenon marbles, but who is it?

Fears for fate of €50,000 sculpture (Ireland)
(3 March 2015; Wexford People)
“723: Homage to Eileen Gray” by Michael Warren has been stolen from his workshop. It is suspected that the piece, which is consists of 9 sold bronze blocks weighting 70kg each, has been melted down.

€25,000 cheese grater stolen from Amsterdam museum
(3 March 2015; NL Times)
Stolen from the Amsterdam Cheese Museum from a locked cabinet in the basement. Really.

New rules for returning art stolen by Nazis are not always fair (Netherlands)
(5 March 2015; Dutch News)
Discussion of the actions of the Dutch Restitution committee.

Roban una cruz en San Isidoro (Cross stolen from San Isidoro; Spain)
(4 March 2015; Diario de León)
The stolen cross, which was taken from the Chapel of St. Martino, is used for religious purposes but has no ‘artistic value’. The article notes that this means that San Isidoro, which houses various important objects, is vulnerable.

El histórico saqueo de la colegiata (The historic plunder of the temple; Spain)
(4 March 2015; Diario de León)
The theft of a cross from the church of San Isidoro brings to mind the 1979 near theft of the Chalice of Doña Urraca from the same church. Other historic items in the church have been found to be in bad condition.

Interpol sigue la pista de 75 obras de arte robadas en Aragón (Interpol tracking 75 works of art stolen from Aragon)
(4 March 2015; Heraldo)
Religious objects have been stolen more than any other in the region over the past 40 years.

Art fraudster arrested in Murcia
(5 March 2015; Murcia Today)
The man had been reserving paintings at art dealerships, taking some with him, and promising to pay later. Clearly he didn’t pay later. He ended up with about 30 paintings.

Dying man’s £5k reward for return of glass antique (UK)
(6 March 2015; Evening Telegraph)
The man says that the glassware was stolen from his home in Carse of Gowrie and was part of his father’s collection.

National Gallery of Australia gets refund as Buddha goes home
(6 March 2015; The Australian)
The stolen Kushan Buddha, bought from NYC dealer Nancy Weiner for $1.08mil USD, will be returned to India. Technically it will be deaccessioned and revert to the dealer’s ownership with the NGA reclaiming the purchase cost thanks to a dealer’s guarantee. Weiner could not provide a legal export certificate for the piece so NGA gets the money, and India gets the piece.

Australia Returns Precious Qing Dynasty Statue to China
(6 March 2015; Women of China)
Seized at the border, the statue of Guanyin was purchased from an eBay dealer in the US. It was returned during a ceremony at the Chinese Embassy in Canberra.

Committee set up to review security in museums: Minister (India)
(2 March 2015; Web India 123)
Because of a number of thefts in the past 5 years, the committee will review security requirements for museums managed by the culture ministry.

Security lapses at Nalanda ruins irk Buddhist council (India)
(4 March 2015; The Times of India)
The Buddhist Monuments Development Council (BMDC) has stated that the number of visitors to various sits are causing damage and they are worried that people are stealing bricks and artefacts to sell to smugglers.

Iran Offers Safe Haven For Iraq’s Endangered Artifacts
(1 March 2015; Eurasia Review)
Iran has announced that any Iraqi artefacts determined to be in harms way can be loaned to Iran for safekeeping. Somehow I doubt Iraq will be taking them up on the offer.

ISIL fighters bulldoze ancient Assyrian palace in Iraq
(5 March 2015; Al Jazeera)
We may have lost part of Nimrud. Details not yet released.

New Van Gogh painting discovered in northern Turkey
(7 March 2015; Daily Sabah)
A rather strange one this. Turkey says this unknown possible Van Gogh was seized in a vehicle in Tokat Province. I think all of us are right to be not as sure as they are.

Stripped bare: thieves steal $100,000 of lingerie from collector (Australia)
(7 March 2015; The Age)
The collector runs her own label and has been collecting the lingerie with an eye towards creating a show of them in the future.

FBI returns stolen Brazilian fossils
(2 March 2015; Delaware Online)
The three fish fossils were seized as part of a larger investigation into illegal fossil smuggling. No information has been given about when and how they were stolen and no arrests have yet been made.

Fake Ancient Egyptian artefact used by Tsar Alexander III of Russia sold to buyer from Denmark at Folkestone auction (UK)
(3 March 2015; Kent Online)
The fake said to have been the Tsar’s paperweight and said to have been smuggled into the UK in a wooden leg, sold for £170.