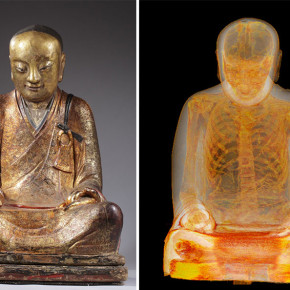 Hot this week: Tragedy in Tunisia.

SXSW Documentary Shows You How to Sell a Stolen Banksy
(18 March 2015; ArtNews)
Everyone discovers that it isn’t easy to sell stolen art, even when the art is street art.

Is that a Whiteley? Why collectors buy lousy fakes as masterpieces
(19 March 2015; Visual Arts Hub)
Slight focus on the fakes scandal in Australia at the moment but talking about fakes in general.

Se roban la campana de la iglesia de Tierrabomba (Bell from the church of Tierrabomba stolen; Colombia)
(17 March 2015; El Universal)
A bronze church bell was stolen from the Our Lady of the Rosary church on the island of Tierrabomba, Colombia. This incident comes after several recent robbery attempts at the church.

Arrestan a sospechoso en Guatemala con 12 piezas arqueológicas prehispánicas (Suspect arrested in Guatemala with 12 prehispanic archaeological pieces)
(20 March 2015; La Vanguardia)
The man is an alleged drug dealer and was seeking to sell the objects on the internet.

Trade in Native American antiques can be tricky
(15 March 2015; Great Falls Tribune)
Now that is an understatement. This article focuses on US sales for the most part.

Hot Diggity! Tony Matelli Dog Sculpture Stolen, Recovered in New York
(16 March 2015; ArtNews)
It was taken from in front of the 72nd and Broadway subway station and found dumped at Riverside Park.

Artist Michel Leah Keck Sues FX for Copyright Infringement for Using Her Paintings on Archer
(18 March 2015; ArtNews)
Three of her works were used without her permission on the animated series so, really, fair enough!

Hunt for missing Pompeii artwork includes stop in Boise
(18 March 2015; Idaho Statesman)
A bit of a round about piece to tie this to Idaho but worth a look at.

Museum ‘smacked’ by theft of rare coins
(20 March 2015; News-Press)
The 6 coins were stolen from the Pony Express National Museum in St. Joseph, Missouri.

Partial victory for Cyprus in Dikmen artefacts fight
(16 March 2015; Cyprus Mail)
A Munich court has ordered the return of 34 stolen artefacts to Cyprus, most of them sacred art. The court found that Cyprus did not prove ownership of the other 49 items in question.

Stolen artefacts to be returned within a month (Cyprus)
(18 March 2015; Cyprus Mail)
Seems the 34 Dikman pieces will be going back quite soon.

Paris show features stolen crown
(17 March 2015; Bangkok Post)
A replica of the replica of the Thai royal crown stolen from Chateau de Fontainebleau will be put on display there.

Mongkut, reinterpreted (France)
(18 March 2015; Bangkok Post)
More on Arin Rungjang who is making the replica of the stolen replica crown.

Couple ordered to return ‘stolen Picassos,’ won’t face jail (France)
(20 March 2015; DW)
Court has ruled that the couple did take and hide the 271 sketches and papers by Picasso; 2 year suspended sentence and forced to return works to Picasso family.

Gold Looted From Ancient Empire Returned to Romania
(20 March 2015; National Geographic)
A good long read about the theft, sale, and partial return of a large cache of Dacian gold objects.

Russian court to hear case against Navalny’s associate accused of painting theft
(18 March 2015; RAPSI)
The associate of Georgy Alburov is accused of stealing a painting that was on public display.

Sign me up to fight Islamic State’s demolition of the past
(15 March 2015; The Telegraph)
Urgh. This doesn’t help anyone.

​Wickenby Museum removes Icarus figure from war memorial for fear of theft (UK)
(18 March 2015; Lincolnshire Echo)
After a spate of metal thefts from war memorials, the museum committee has opted to remove the Icarus from their memorial as a precaution.

Digging for treasure: Is ‘nighthawking’ stealing our past?
(21 March 2015; BBC News)
A look at illegal metal detecting.

Disputed Buddha statue with mummified monk inside withdrawn by Dutch owner
(21 March 2015; Shanghai Daily)
News about the monk inside hit big and, of course, it turns out to be dodgy. Villagers in Yangchun, Fuijan claim it was stolen in 1995 from their village temple.

Spotlight: Mummy Buddha should be restituted according to ethical principle over human remains: experts (China)
(22 March 2015; Shanghai Daily)
Thoughts on the mummy-in-a-statue case from Inge van der Vlies at the University of Amsterdam.

Accused held 5 years after temple theft
(19 March 2015; The Hindu)
An arrest has been made for the theft of an idol from Eriyal Kuruvayal temple in 2010. Three others have previously been arrested for this theft.

15 kg Bronze Arch Stolen from Temple (India)
(22 March 2015; The New Indian Express)
Thieves attempted to steal a 75kg Ayyappa idol from a temple at Kollathur near Thiruvennainallur. When this failed, they broke and stole a 15kg bronze arch that was behind the idol.

Vietnamese thief takes pottery piece of famous artist in broad daylight
(17 March 2015; Thanh Nien News)
One week after the death of Vietnamese-French artest Le Ba Dang a man was arrested for stealing a ceramic piece of his while most staff members of the Le Ba Dang Art Foundation were at the funeral.

Assyrian Artifacts to Be Returned to Iraq
(15 March 2015; The New York Times)
Around 65 artefacts, including a head of Sargon II stolen in 2007 or 2008, are being returned to Iraq from the US. Also on the list, several objects stolen from a Saddam Hussein palace during the invasion.

How a Michigan Farmer Made $4 Million Smuggling Rare Pez Containers into the U.S.
(20 March 2015; Playboy)
Why smuggle art when there is pez.