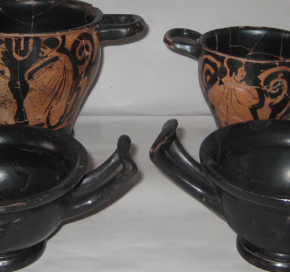 Increase in Antiquities Smuggling Busts amidst Government Crackdown
(29 January 2015; ArtNet)
Huh! Former director of Christie’s quoted as saying “This is the greatest scale of looting we have seen since the Second World War.” Also quotes from my colleague Christos Tsirogiannis

A Historic Manuscript on Aztec Life Is “Virtually Repatriated” (Mexico)
(27 January 2015; Hyperallergic)
Digital repatriation is not an answer to the problem but it is an spectacular example of dynamic public display of an object. The Codex Mendoza (which is not illicit).

Wells Fargo museum crashers got the gold but missed the real spoils (USA)
(27 January 2015; SF Gate)
Some people in a stolen vehicle crashed it into the Wells Fargo Museum and stole some gold nuggets.

USS Kidd’s wardroom and locker broken into, artifacts stolen, ship curators say (USA)
(27 January 2015; The Times-Picayune)
The objects stolen were two bowls, two saucers and a plate, all white with a blue ribbon around the edge and a blue anchor.

Fugitive treasure hunter who found ‘Ship of Gold’ nabbed after two years on lam (USA)
(28 January 2015; Fox News)
Tommy Thompson, who located the SS Central America (and *ahem* “salvaged” all its gold) has been arrested in Florida.

EU directive helps stolen artifacts’ return to CzechRep
(26 January 2015; Prague Daily Monitor)
Tens of thousands of Czech artworks, most of them religious, were illegally removed from the country and are in the EU. A new EU directive may make it easier for churches and owners to claim them back.

Dordrecht Museum buys back art stolen in WWII from heirs (Netherlands)
(29 January 2015; NL Times)
They originally paid 76k Euro for the piece but what they paid the heirs has not been revealed.

Egypt Expects to Recover 36 Antiquities Seized in Spain
(30 January 2015; Latin American Herald Tribune)
Related to the more general story of seizures in Europe, 36 of the seized objects are Egyptian.

Desconocidos entran a robar al Santuario de Franqueira (Unknown persons enter and rob the Sanctuary of Franqueira; Spain)
(30 January 2015; Atlantico)
Thieves entered the sanctuary of Our Lady of Franqueira and stole the silver chain and crown off the Christ child on the main altar.

Three reported over curling medal raid on Dumfries museum (Scotland)
(27 January 2015; BBC News)
Some Olympic curling medals, four club medals, and a silver casket were taken from the museum in April and three men have been reported to the Procurator Fiscal regarding the theft.

Temple robber nabbed in Nepal; police try for deportation
(25 January 2015; Business Standard)
The man accused of the theft of the idol of Lord Raghunath has been named. He is a Nepali citizen and India is trying to have him extradited. He apparently confessed to the crime to Nepali police.

Security matter of concern (India)
(26 January 2015; The Tribune)
It is wonderful that the idol of Lord Raghunath has been recovered but major questions are being raised about temple security.

Publicise Value of Objects of Art, Raise Vigilantism (India)
(29 January 2015; New Indian Express)
Idea offered that if the public were told the monetary value of antiquities they would do more to protect them.

3 idols stolen from Jain temple (India)
(29 January 2015; The Times of India)
ANOTHER idol theft. An old Jain temple at Korhar Bazaar, Allahabad was robbed of 3 astadhatu idols were stolen. Angry locals gathered in front of the temple, stopping traffic.

Technology helps crack Himachal idol theft (India)
(29 January 2015; Z Newz)
The police used Google Earth to pinpoint the exact location where idols stolen from a temple were buried by the thieves. Police used WatsApp to contact their counterparts in Nepal. Thief revealed he had contact with a monk in China who would ‘dispose’ of the idols.

Malabar temples fail to adopt security systems
(30 January 2015; The Hindu)
Because of a spate of idol thefts, 50 out of 1330 Malabar temples were told to install CCTV and fewer than 10 actually have. Rs.40,000 was available for upgrades.

Brazil’s claim adds yet another facet to the case of the Bahia Emerald
(25 January 2015; Los Angeles Times)
This case is honestly strange. a 840-pound emerald in the LA County sheriff’s office evidence locker