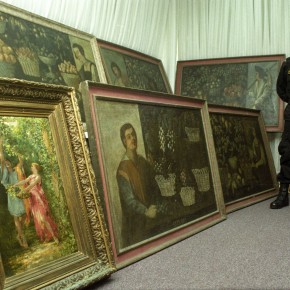 Cookie Monster steals the show in PBS special
(15 February 2015; USA Today)
Cookie Monster takes on art theft in The Cookie Thief: “Me no eat it. Me have self control. Me no eat the paintings. They very tempting”

Let’s end the row over the Parthenon marbles – with a new kind of museum
(15 February 2015; The Guardian)
3d printing as a solution to cultural property disputes? Probably not. For worse or better, museums and collectors want ‘real’.

Unsolved Art Heists: The Missing Paintings of Vincent van Gogh
(22 November 2015; Artnet News)
13 van Gogh’s have been stolen and recovered, 85 have been lost. 3 were stolen and have not been recovered.

Three paintings stolen from the University of Toronto (Canada)
(13 February 2015; The Globe and Mail)
The paintings missing include one by Francisco Guardi and the paintings seem to have been stolen in two batches.

Acusa sacerdote incremento de robos en iglesias de Zacatlán (Priest claims there is a increase in church robberies in Zacatlán; Mexico)
(19 February 2015; Municipios)
After a string of thefts from churches in Zacatlán, the district government is demanding more police surveillance. Thieves have targeted both everyday items and sacred art.

Apurímac: recuperan 13 campanas robadas por banda delincuencial (Apurímac: 13 bells stolen by criminal gang recovered; Peru)
(17 February 2015; RPP)
The gang had been engaged in historic bell theft from churches throughout the region. No word if they were for sale or to be melted down.

Over $160 million worth of historical art recovered by FBI Art Crime Team (USA)
(15 February 2015; Examiner)
More on the 10th anniversary of the FBI Art Crime unit.

Toledo museum to give up prized German artifact. (USA)
(19 February 2015; Toledo Blade)
The Toledo Museum of Art will voluntarily return a 450-year-old astrolabe that was likely stolen from the Gotha Museum just after WW2.

Iolani Palace in Hawaii Is Recovering Its Looted Furnishings (USA)
(19 February 2015; The New York Times)
The furnishings owned by Queen Liliuokalani are using old photos and newspaper reports to find lost and looted pieces and ask for their return.

California Man Indicted For Taking Archaeological Artifacts From Public Lands In Inyo County (USA)
(20 February 2015; Sierra Sun Times)
Norman Starks was indicted on six counts all of which relate to his removal of Native American artefacts from Federal Land. The maximum penalty he faces is 10 years in prison and a $100,000 fine.

Trial over Picasso’s ‘gift’ to handyman and the murky world of art crime (France)
(16 February 2015; The Conversation)
Thoughts from criminologist John Kerr.

Qué hace la Iglesia cuando se roban formas consagradas? (What does the church do when the consecrated hosts are stolen?; France)
(17 February 2015; Aleteia)
After a series of thefts of hosts and chalices, the bishop of the French diocese of Belley-Ars has ordered that the blessed sacraments be removed unless securely fastened with a lock. This is so the doors of the church can remain open for public prayer.

Prussian Cultural Heritage Foundation Has Restituted Eight Works To Heirs (Germany)
(15 February 2015; Artlyst)
After a provenance investigation the 8 works were returned to the heirs of Jewish publisher Rudolf Mosse. The pieces will mostly remain on loan in the Berlin State Museums.

Work in Helmut Newton photographs could be looted masterpiece (Germany)
(15 February 2015; The Art Newspaper)
Böcklin’s Tritonenfamilie which disappeared from the Kaiser Friedrich Museum in Magdberg at the close of WW2 seems to be in a 1977 and a 1999 photo by Newton. The Helmut Newton Foundation denies it. One of the photos can be seen here (NSFW): https://www.bonhams.com/auctions/17098/lot/152/

Flemish masterpiece returned to Wrocław museum (Germany)
(14 February 2015; Radio Poland)
The piece by Jacob Jordaens was returned after a year of appeals by the Polish Foreign Ministry was taken at the close of WW2 and surfaced at a London auction in 2008.

Swiss Museum Unable to Get Gurlitt Art Trove Amid Dispute Over Will (Poland)
(17 February 2015; The New York Times)
I don’t think anyone thought it would be easy for Bern’s Kunstmuseum. Gurlitt’s family is challenging the donation.

Bryan Pearce Outsider Art Stolen In Cornwall Heist (UK)
(17 February 2015; Artlyst)
The four works were taken from a private home and are valued at around £50k each. Police think the paintings may have been targeted.

Facebook post helps cops nab temple thief (India)
(17 February 2015; The Times of India)
Three temple thefts were solved and four idols were recovered in Nallakunta after the police posted a video of the thieves on Facebook and a person called in with an identification.

Four Idols Stolen from Jain Temple (India)
(18 February 2015; The New Indian Express)
The items were taken from a Jain Temple in Salukkai village near Vandavasi and included bronze idols of Mahaveer Jain and Thirthankar. The thieves climbed the temple wall and broke open the main gate.

Police recover stolen bronze idol, nab carpenter (India)
(19 February 2015; The Times of India)
The idol of Lord Ardhanarisvara was stolen from an apartment in Puducherry. Other stolen items were found in the carpenter’s possession.

After theft, Himachal govt mulls trust for Raghunath temple (India)
(21 February 2015; The Times of India)
2 months after the major temple theft and since the recovery of the idols, the government is considering forming a protection trust to oversee security. At the moment security is the responsibility of the royal family of Kullu.

Mongolia mummy find highlights Buddhist ‘living gods’ tradition (Mongolia)
(20 February 2015; Tuoitre News)
The Mongolian praying monk mummy was, indeed looted, but he will be returned to his original resting place an security features will be installed to prevent repeat theft.

Saudi Artist Ahmed Mater Sues Swiss Watchmaker Swatch For Plagiarism (Saudi Arabia)
(18 February 2015; Artnet News)
Swatch replaced the cube in Mater’s Magnetism with a watch without asking. Beyond the issues with appropriation, Magnetism honours the Hajj and Mater now fears reprisal from Saudi Arabia’s religious police for this unauthorised use.

Prince Sultan orders girl rewarded for surrendering antiquities (Saudi Arabia)
(19 February 2015; Yahoo News)
Zabyah Al-Shaharani, a 15 year old who did the right thing and reported the neolithic tools she found to the authorities, has been given double compensation for them and a letter of thanks from president of the Saudi Commission for Tourism and Antiquities .

The men who smuggle the loot that funds IS (Syria)
(17 February 2015; BBC News)
An interview with a smuggler, a dealer, a police officer, and an archaeology official.

Antiquities e-registry launched (UAE)
(18 February 2015; Gulf News)
The e-registry includes artefacts from all emirates and is meant to protect the pieces and provide reliable info about them.