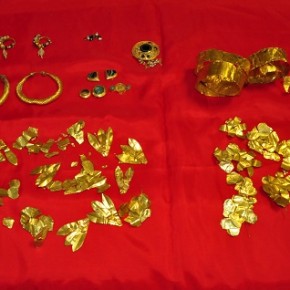 Hot this week: Culture Crime News is back!

Stolen Gods is looking for a student volunteer contributor.

Stolen Egyptian Antiquities Hit the Open Market
(8 January 2015; ArtnetNews)
With a link to a post by Sam Hardy.

Reclaiming Art Seized by Castro’s Government Will Be an Uphill Battle
(8 January 2015; ArtnetNews)
Good luck getting anything you left behind in Cuba.

Destroying the memory of the dead (Trinidad)
(11 January 2014; Trinidad and Tobago Guardian)
The obliteration of historic graves for wrought iron.

Punk band find $250,000 stolen painting in New Orleans
(8 January 2014; BBC news )
Members of the band Stereo Fire Empire found the ‘blue dog’ painting by George Rodrigue propped up against a wall only moments after they were discussing the theft.

Missing bell returns to historic Sturgis school (USA)
(5 January 2015; Woodtv)
The family who had the bell agreed to return it provided they could remain anonymous.

‘Blue Dog’ painting valued at $250,000 stolen from New Orleans gallery (USA)
(6 January 2015; Reuters)
The 1997 painting “Wendy and Me” was taken from the Rodrigue Studio in New Orleans’ French Quarter.

Anvil stolen from museum in Morrison, Illinois
(7 January 2015; WQAD8)
The anvil was taken from the Morrison Heritage Museum sometime in October. It weighs over 200 pounds and there is speculation it was taken for scrap.

State rejects most restitution claims (Czech Republic)
(7 January 2015; Prague Post)
The state has turned down far more claims made by churches for the return of property seized during the communist regime than it has approved. Many of these items are now in museums.

Greece balks on art loan after Parthenon Marbles row
(6 January 2015; The Art Newpaper)
The Museum of Cycladic Art in Athens has yet to decide if they will loan a piece to the British Museum after the Parthenon Marbles insult.

Archaeologists assessing finds made in police bust in northern Greece
(8 January 2015; eKathimerini)
The collection of gold artefacts was found in a home in Imathia during a police raid.

Se llevan la corona de la Virgen de la Piedad de Villanueva de Alcardete (The crown of the Virgen de la Piedad of Villanueva de Alcardete stolen; Spain)
(5 January 2015; ABC.es)
The crown was not actually made of gold but has great sentimental value. It was located two meters up on the high altar and the thieves removed the bolt that attaches it to the statue of the Virgin.

Prominent Swiss Art Dealer Confesses to Homicide
(6 January 2015; ArtnetNews)
Article does not name names. Both the suspect and his father have art galleries in Zürich’s city center.

Religious row has erupted over 16th Century painting worth £150,000 in Hexham Abbey
(7 January 2014; Chronicle Live)
A church judge has blocked the sale of a 16th century piece. More anti deaccessioning.

James Palmer Gets Looted Art Back
(5 January 2015; The Jewish Daily Forward)
Profile of the founder of Mondex.

Return of Buddha to help seal India-Australia free-trade agreement
(9 January 2014; The Sydney Morning Herald)
I can’t quite articulate why this upsets me, but it does. These should be independent things. Return of cultural property shouldn’t happen because you want something…

Buddha statue found to have been stolen will be returned to India
(4 January 2015; The Guardian)
Purchased by the NGA Canberra in 2007. Originally from Uttar Pradesh and sold by disgraced dealer Subhash Kapoor.

Sale of 10 Egyptian artifacts suspended in Australian auction house
(4 January 2015; The Cairo Post)
The pieces were detected by scholars and Egyptian authorities and it has been confirmed that they came from post-2011 looting.

Ivory bans in the art world: will Australia follow suit?
(5 January 2015; Daily Review)
In light of strong ancient/antique ivory sales, will Australia implement a near-complete ban like the United States?

Moa bone auction criticised (New Zealand)
(7 January 2015; Stuff.co.nz)
The bones almost certainly came from an archaeological site and were being sold in violation of New Zealand law. Around 4800 moa bones have been sold on the auctio site over the past 2.5 years.

Himachal Pradesh Idol theft casts cloud over Basant Panchami festivities
(9 January 2014; Hindustan Times)
After the theft of the idol of Lord Raghunath in December it is unclear if residents of the district will celebrate or call off Basant Panchami, “the Hindu festival that highlights the coming of spring”.

Ministry of Culture Frames Art Acquisition Policy (India)
(5 January 2015; The New Indian Express)
This is India’s ‘first ever comprehensive acquisition policy’. Thought is that with proper in-country acquisitions, the illegal export of art and antiquities will be reduced.

Jain Samaj asks police to recover stolen idols (India)
(6 January 2015; Business Standard)
A delegation of the Jain Samaj met with police and demanded that the 46 idols and other items stolen from Sidhant Tirth Kshetra in Sikhorpur village in late December be found.

Three held with stolen ashtadhatu idols (India)
(7 January 2015; Times of India)
The men were caught carrying the idols stolen from Ballia district recently. They suspects say the theft was planned and they meant to pass the idols on to smugglers.

Thieves purloin ‘Coy Girl’ (Thailand)
(7 January 2015; Bangkok Post)
The piece, by the late National Artist Misiem Yipintsoi, was taken from the family collection . NONE of Misiem’s works are available commercially so family hopes it is unsellable.

Pre-Islamic artifacts found in Asir (Saudi Arabia)
(8 January 2015; Saudi Gazette)
As part of the “Retrieving Artifacts” campaign “to encourage the local community to deliver any found artifacts” to proper authorities, a woman turned over 19 Neolithic artefacts and reported their findspot.