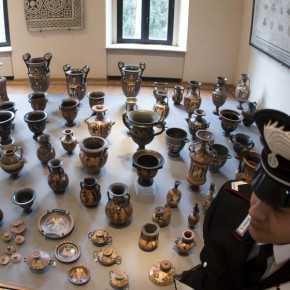 When Should Antiquities Be Repatriated to Their Country of Origin?
(21 January 2015; The New York Times)
A ‘room for debate’ discussion on the topic

Sappho’s New Poems: The Tangled Tale of Their Discovery
(23 January 2015; Live Science)
“I just have a nagging fear that secretive, billionaire-backed evangelicals questing after original Bibles aren’t likely to be the best servants of disinterested classical scholarship.”

35,000-year-old skeleton to return to Egypt
(18 January 2015; Ahram Online)
The skeleton isn’t illicit. It was in Belgium because of a partage agreement but Egypt considers it nationally significant and effected its return via diplomacy. Good job!

Bolivia caravan celebrates return of god of prosperity
(24 January 2015; Associated Press)
Celebration at the return of the pre-Conquest Ekeko statue from the Museum of History in Bern.

Rapa Nui va por sus moai (Rapa Nui goes for its Moai; Chile)
(23 January 2015; Revista Capital)
Rapa Nui (Easter Island) is seeking the return of Moai statues (yes, the giant heads) in foreign museums. They have approached museums in mainland Chile and the USA and say that this is only a start.

Interés por restaurar iglesia de la Hacienda de Santa María (Interest in restoring church of the Hacienda de Santa María; Mexico)
(19 January 2015; Milenio)
Beyond just being restord, the church at the hacienda will be converted into a museum of sacred art as a number of religious works from other locations were brought there in the 80s and 90s because it was feared they would be stolen in their original contexts.

Roban en Catedral de Hermosillo (Robbery at the Cathedral of Hermosillo; Mexico)
(20 January 2015; Terra)
A wooden door was broken, the tabernacle and various saints were vandalised, and gold medals and a ciborium were stolen.

Norton Simon dealt setback in Nazi-looted art case (USA)
(21 January 2015; Los Angeles Times)
The US Supreme Court refuses to hear the museum’s appeal regarding the restitution claim for Adam and Eve by Cranach the Elder.

Dale Chihuly Artworks Thieves in Custody
(22 January 2015; Artnet News)
Four have been formally charged with the theft of portions of a Chihuly sculpture from the Denver Botanic Gardens. The accused were ‘black-out drunk’ and broke in to the Gardens with no prior plans to steal the work. They dumped the sculpture in a field and it was destroyed by a corn combine harvester.

Incredible discovery of the oldest depiction of the universe almost lost to the black market (Germany)
(22 January 2015; National Post)
The story of the Nebra Sky Disc

Greeks hold candlelight vigil demanding the return of Parthenon marbles
(19 January 2015; GMA News)
This was at the Acropolis Museum

Repatriation of 2,607 Seized Ancient Greek Coins From Germany
(24 January 2015; Greek Reporter)
The 2,607 coins seized from a Greek citizen traveling by car to Munich have been returned to Greece

How a $12 Million Monet Was Repaired After Some Idiot Punched It  (Ireland)
(23 January 2015; Gizmodo)
It took three years to repair a vandalised Monet. This is how conservators did it.

Record €50m hoard of looted Italian antiquities unveiled by police
(21 January 2015; The Guardian)
One of many articles on the display of Becchina items returned from Switzerland.

18 arrests as 1,500 artefacts recovered – update (Italy)
(23 January 2015; Gazzetta Del Sud)
18 people were arrested in Campania and Lazio and 1500 looted artefacts were recovered. Allegedly these individuals were part of a gang of artefact diggers and two of the recovered pieces are amphorae attributed to the painter Assteas.

Traffico internazionale di reperti archeologici: tombaroli attivi anche a Pompei (International traffic in archaeological finds: Grave robbers also active in Pompeii)
(24 January 2015; Sorrento Press)
The group of 19 people arrested (one up from the 18 mentioned in the last article) conducted looting along the boundary walls of Pompeii.

Paintings found decade after Hoorn museum burglary (Netherlands)
(22 January 2015; NL Times)
Arthur Brand has received a photo of a 1629 painting by Jan Linsen which was stolen from the Westfries Museum in 2005.

Smuggler attempts to leave country with 100 artifacts (Serbia)
(19 January 2015; B92)
Around 100 artefacts were found by police searching a van at the Horgos border crossing. Seven Serbians were in the van which had Austrian plates.

Picasso, Miró, and Matisse Forgery Ring Busted (Spain)
(20 January 2015; Artnet News)
Three people have been arrested in Zaragoza for trying to sell fake Mirós, Picassos, and Matisses. This is the culmination of a large police operation to stamp out this faking ring.

“La versión del ladrón del Códice es surrealista” (“The codex thief’s version of the story is surreal”; Spain)
(24 January 2015; Religión Digital)
An electrician employed by the Cathedral admitted to taking it and the codex was found in a garage he rented. Now he says he never saw it before.

Game of Thrones sculptor’s statue stolen: Police investigate religious link
(22 January 2015; BBC)
Manannán Mac Lir, by John Sutton, was stolen and a wooden cross bearing ‘You shall have no other gods before me’ was left in its place.

Thieves strip church of historic brassware (UK)
(23 January 2015; Stroud Life)
Brassware from the 19th century has been stolen from St Peter’s in Framilode, Gloucestershire only months after thousands of pounds were spent restoring it.

Museums and the plunder of antiquities
(20 January 2015; The Straits Times)
General discussion of antiquities trafficking with an Australia focus.

Ancient stone artefacts centre of cultural row in Vanuatu
(20 January 2015; Radio Australia)
The acting director of the Vanuatu Cultural Centre has been accused of ‘bowing’ to threats made by a French antiquities collector.

Cambodia to get 16 Pongpat artefacts
(19 January 2015; Bangkok Post)
16 Cambodian artefacts found among those seized from former Central Investigation Bureau Chief Pongpat Chayapan will be returned to Cambodia. Another 20 could go back.

Lord Vishnu’s idol stolen from Nalanda village
(21 January 2015; The Times of India)
The piece, taken from Katauna village in Nalanda district, had recently been documented and it was announced that these photos would be transmitted to the Art Loss Register.

Sikh warriors’ stolen daggers recovered (India)
(22 January 2015; The Tribune)
They were stolen from Maharaja Ranjit Singh Panorama and an unidentified woman left them in Gurdwara Ramsar.

Kullu Police solves Lord Raghunath temple theft, all idols recovered (India)
(23 January 2015; Indian Express)
Amazing news! The idol was found buried near Bajaora on the outskirts of Kullu. The piece was found based on information given by a suspect.

Hundreds of devotees pull Lord Raghunath chariot (India)
(25 January 2015; Tribune)
Image of the very large number of devotees who came to support the cleaning and reinstalling of the stolen idols which were recovered this week.

Police to seek deportation of main accused from Nepal (India)
(25 January 2015; Tribune)
The man accused of stealing the recently recovered idol of Lord Raghunath from Kullu is said to be in Nepal, a country with no extradition treaty with India.

National and cultural treasures missing by the score, says agency (Japan)
(22 January 2015; The Asahi Shimbun)
These are mostly swords and mostly in private hands, as well as calligraphy books and sculptures. There are rules against selling these items but owners appear to have stopped complying.

Exhibit unveils artifacts smuggled from Korea
(19 January 2015; Korea Joongang Daily)
The Terauchi Collection, taken from Korea in the late 18th and early 19th century by a Japanese officer, has been partially repatriated and is on display.

Uzbekistan dissents break into 1st daughter’s residence to ‘reclaim’ artefacts
(25 January 2015; Union Gazette)
I believe this happened a while ago but I didn’t link to the story here. Here it is.

$300,000 in Fine Wine Stolen From Famed Restaurant Recovered (USA)
(23 January 2015; ABC News)
The wine stolen from French Laundry was ‘found’ in a ‘private cellar’ in North Carolina but no arrests have been made and the police aren’t saying much.