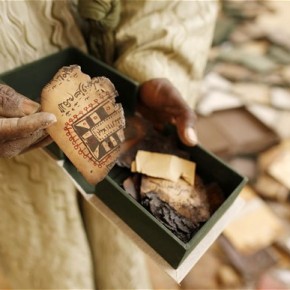 With Naming Rights, ‘Perpetuity’ Doesn’t Always Mean Forever
(28 November 2014; MSN)
Just because you gave your pile of looted antiquities to a museum doesn’t mean the museum will always keep a gallery named after you. Perhaps come up with another hobby?

German Media Corroborates $36M Islamic State Antiquities Trafficking
(28 November 2014; Hyperallergic)
Again, I caution that anything coming from this area is usually questionable at best, but this article is by Sam Hardy so well researched and worth reading.

Iraq preps exhibition of its looted modern art
(30 November 2014; Albawaba)
After years of work, the Iraqi ministry of culture is presenting a exhibition on looted modern Iraqi art that has been recovered. Various members of the public and Interpol helped with it.

Abdelkarim: Contents of Syrian museums are in good condition
(24 November 2014; Syria Online)
Director of the Archeology and Museums General Directorate Mamoun Abdelkarim says that something like 99% of Syria’s museum collections have been protected in the past few years

Are we graft-busting yet?
(30 November 2014; Bangkok Post)
An editorial about former Central Investigation Bureau chief Pongpat Chayapan who has been implicated in all sorts of corruption, including the trafficking of protected flora and fauna and antiquities.

Trove of ancient artefacts may include rare imports
(29 November 2014; The Nation)
More on this case, which may be really quite huge. Seems he had antiquities from neighboring countries…Cambodia I assume.

Family of Thai Princess Is Stripped of Royal Name
(30 November 2014; New York Times)
This is tied to the corruption charges against Pongpat Chayapan, so to the antiquities trafficking ring accusations

Four South Koreans held over theft of Tsushima Buddhist statue (Japan)
(25 November 2014; The Japan Times)
The men took a Buddha statue from a temple in the town of Mitsushima and are accused of other unspecified crimes. The article notes that other Buddhist statues have been the target of, specifically, South Korean thieves.

Burglars decamp with lakhs worth of loot at Jain temple (India)
(29 November 2014; Business Standard)
Gold and silver idols and other items stolen from Jain Temple in Rajendrapuram area of Delhi

Policía captura a hombre por robo de imágenes religiosas (Police arrest a man for robbing religious items; Guatemala)
(24 November 2014; Prensa Libre)
The man was caught in the church of San Cristóbal Acasaguastlán, which had been robbed of religious items before.

Honduras condena a salvadoreño por robo de patrimonio religioso (Honduras sentences a Salvadorian for theft of religious heritage)
(27 November 2014; El Salvador.com)
The theft occurred at the church of San Sebastián in San Sebastián and is considered an aggravated theft as, I think, all theft of cultural patrimony is in Honduras. The man was caught taking 12 church items.

Inventor’s children seek to regain missing stained-glass windows valued at $3.5 million
(29 November 2014; Baltimore Sun)
64 stained-glass windows worth $35mil were stolen from inside an old milk house. The glass was about 100 years old and from a Catholic church in Detroit. The glass has been located but a slavager who has it in his possession says he bought the glass legitimately.

Lloyd’s of London won’t pay for lost Degas sculpture, claims disappearance ‘mysterious’: court papers
(28 November 2014: New York Daily News)
The statue was being shipped to a convicted tax evader and poacher so, you know, hard to blame Lloyds for not believing it just magically disappeared.

Treasure case involving Delaware lawyer in judge’s hands
(28 November 2014; Delaware Online)
This case has come up here before and it is no less strange. Shipwreck fakes and emeralds?!

Swiss museum publishes list of Nazi loot art trove
(29 November 2014; Times of Malta)
Which of course leads to the next one.

Gurlitt Museum Admits Picasso Painting Was Stolen from Jews
(30 November 2014; The Jewish Press)
I am not sure ‘admits’ is the right word, but I would imagine there will be more and more announcements like this as Bern sifts through this obvious mess.

Bern museum should take no Gurlitt pieces until they are ‘completely cleared’
(27 November 2014, DW)
The President of the World Jewish Congress Ronald Lauder explains why he thinks Bern taking the Gurlitt hoard is a bad idea.

The Frenchman who Saved the Mona Lisa
(23 November 2014; Times of Israel)
Profile of Jacques Jaujard.

Looted artefacts from occupied Cyprus returned
(29 November 2014; In Cyprus)
A Canadian collector has returned four looted frescoes. Two have been identified and two have not.

Catholic church to clamp down on religious art theft (Italy)
(28 November 2014; The Telegraph)
This follows a spate of church robberies…perhaps some of them to fill that lawyer’s house.

La parroquia realiza una copia artística de las cuatro tablas robadas en 1987 (Parish commissions a copy of paintings stolen in 1987, Spain)
(24 November 2014; El Adelantado)
Officials at the parish church of Santo Tomas de Cantérbury have given up ever recovering the art that was stolen in the 1980s.

2 ancient Islamic lanterns surface in London
(25 November 2014; Cairo Post)
Two Mamluk pieces stolen from the National Museum of Egyptian Civilization where IDs when an academic was called in to authenticate them for a seller.

New evidence of art theft in Cairo
(26 November 2014; Art Newspaper)
Photographs show that the Mausoleum of Salar and Sanjar has been stripped of a wooden frieze.

Tunisia’s Culture Ministry Blocks Auction of Looted Antiquities
(24 November 2014; ArtNet News)
Were able to stop the sale at Millon Drouot which is a bit surprising. I wonder what the back story is.

Theft charge over One Tree Hill pine’s remains
(26 November 2014; New Zealand Herald)
This one is complicated and it really is worth reading the Wikipage on it. The tree is a symbol of Maori protest and was cut down as such. The pieces suddenly appeared for sale online and the person with is was charged with theft. As it was being moved, a woman attacked the tree AGAIN as a continued symbol of protest.