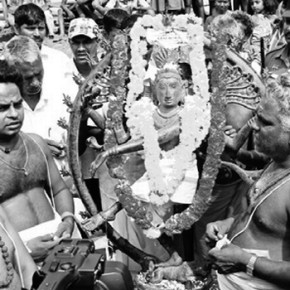 Hot this week: Cuno causes a bit of a stir in some circles by not really saying anything new.

Getty’s James Cuno defends museums’ right to keep ancient art
(3 November 2014, Los Angeles Times)
…which surprises no one. When one finds oneself falling back on ideas of “Western civilization” and ideas of Western exceptionalism to defend one’s stance…one should probably be tucked into bed for the night.

Libya’s Italian-era gazelle statue disappears in Tripoli
(4 November 2014, BBC)
And rumors are flying about who is responsible.

Incoming National Gallery of Australia director Gerard Vaughan faced with a storm
(6 November 2014, Canberra Times)
The Indian idol scandal, maybe another one, PLUS a brewing issue with an Indonesian piece.

Church Robbed in Calama (Chile)
(3 November 2014, I Love Chile)
Among other things the thieves stole statues and a manger set worth a lot of money.

Getty plans to redisplay the Getty Villa
(3 November 2014, The Art Newspaper)
…now that they are a ‘looting-weary buyer’.

Ancient arrowheads spur litigation between Victoria College, collector (US)
(8 November 2014, Victoria Advocate)
Very interesting. A collector in Texas brought arrowheads to the college for authentication. The college says he looted them and wont return them.

Accreditation board will not investigate University of Oklahoma museum’s handling of Nazi-looted artwork (US)
(6 November 2014, The Oklahoman)
I wouldn’t have thought that they would, but yes. Worth reading if you are following the case.

Stolen totem pole comes home (US)
(5 November 2014, Juneau Empire)
After going missing from Prince of Wales Island, the totem pole ended up in the possession of John Barrymore and Vincent Price. Now it is back in Alaska.

Two heritage pieces stolen from cultural centre on Cormorant Island (Canada)
(6 November 2014, Global News)
The Kakwaka’wakw pieces are contemporary but are heritage none the less. Police feared they would be sold to a gallery or collector.

Man in custody after carvings taken from First Nations shop (Canada)
(7 November 2014, Times Colonist)
That was quick! The police made an arrest.

Monastery idols stolen (Nepal)
(8 November 2014, EKantipur)
Everyone should read this one. It is exactly what is wrong. Six armed robbers broke into a temple in Takchi village, stole 18 idols and smashed 6 more. Villagers tried to stop them but their lives were threatened. Because the village is remote, it took authorities 3 days to get there after the robbery.

Dilemma: Remove Artefacts from Churches or Let Thieves Get to Them (Macedonia)
(6 November 2014, Macedonia Online)
This is the situation the world over: remote churches (or temples, etc) are filled with objects of devotion but financial and logistical issues make them nearly impossible to protect. If you remove the items from the church, very poor people lose their living heritage.

Nazi ‘Arbeit Macht Frei’ sign stolen from gate at Dachau concentration camp (Germany)
(2 November 2014, Telegraph)
Well this is a low for the cultural property thieves of the world. Not the first time a Work Will Set You Free sign has been stolen.

Switzerland Begins To Confront Its Own Holocaust Past
(5 November 2014, The Jewish Daily Forward)
More on WWII art restitution and return.

French museums face a cultural change over restitution of colonial objects (France)
(3 November 2014, The Guardian)
Is the idea of ‘inalienable’ French cultural patrimony over?

The art world’s shame: why Britain must give its colonial booty back
(4 November 2014, The Guardian)
Jonathan Jones weighs in.

The ‘Rathkeale Rovers’: 13 men charged with stealing rhino horns and museum antiquities (UK)
(6 November 2014, Independent)
This band, based out of Ireland, is accused of robbing museums and auction houses of historic rhino horn which they sold on the black market.

UK cultural institutions leave their WWI cases empty to protest insane copyright
(2 November 2014, Boing Boing)
Skirting the edge here, but I think absurd copyright law is a crime against art and expression so in it goes!

Museum raids: Thirteen charged after ‘high-value’ thefts (UK)
(6 November 2014, BBC)
These were the people accused of taking Chinese artefacts from a number of museums.

Yerevan 1990: The Strange Disappearance of the Mayr Hayastan T-34 Tank (Armenia)
(8 November 2014, Hetq)
Not your average museum theft when a tank goes missing from a museum in Armenia in 1990.